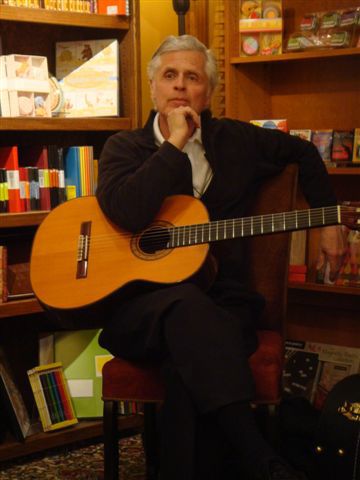 John Harrison grew up in a family where people liked to sing. He will perform a free show at the Basalt Library on Thursday, Jan. 30, beginning at 5:30 p.m. 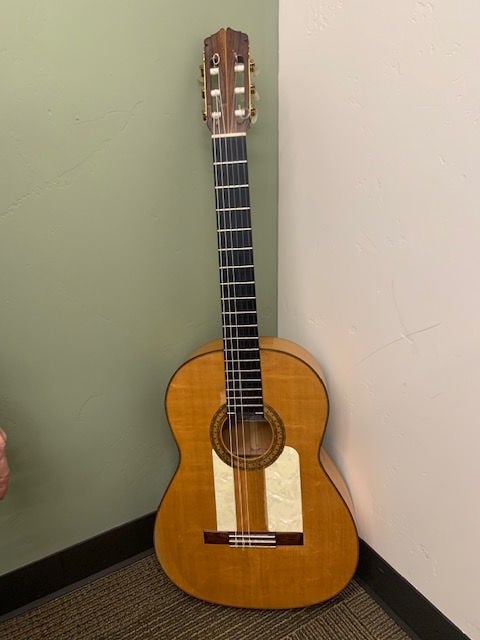 If guitars could talk, John Harrison’s would have plenty to say.

Some folks say there ain’t no bears in Arkansas

Some folks never seen a bear at all

Some folks say that bears go around eating babies raw

Some folks got a bear across the hall

Some folks say that bears go around smelling bad

Others say that a bear is honey sweet

Some folks say this bear’s the best I ever had

Some folks got a bear beneath their feet.

You can hear Fromholz’s song about bears, traditional folk songs, old sea songs, songs about skiing, some flamenco guitar playing and more Thursday, Jan. 30, from 5:30-6:30 p.m. at the Basalt Library as local musician John Harrison entertains for free. He had a crowd when he played last spring, so get there early.

As hard as it may be to believe, there was a time of no CDs, no iPods and no streaming songs for entertainment. Instead, people pushed back from the dinner table or gathered in the living room or parlor and they opened their mouths and sang. Hymns. Traditional folk songs.

Maybe something a little more regional, like country and western or sea shanties, depending upon what part of the country you lived in.

John Harrison grew up in a family where people liked to sing.

“A lot of time, they had some whiskey and yelled poetry at each other.”

As we sit in a sparsely furnished meeting room at the Basalt Library and talk, Harrison plays his blond wood flamenco guitar and occasionally sings a stanza or two of a song that he is including in his Basalt Library show. He has a rich, deep voice and his fingers effortlessly glide over the nylon strings of his guitar.

No one in his family played an instrument, so Harrison began to teach himself how to play guitar, and over the years he learned to play different styles of guitar in stages.

In the early 1960s, Harrison was going to college at Denver University and there was an active folk music scene. He began collecting traditional songs, folk songs, a lot of different music and musical styles including classical.

As a young kid, Harrison became fascinated with history. He was living in Eastern Pennsylvania, and the idea that he lived not far from Valley Forge, the winter camp of George Washington and the American Revolutionary Army, intrigued him. As he grew up playing different guitar styles, Harrison was drawn to the story songs that were either historical or they talked about some aspect of history.

Now, in his 70s, Harrison thinks of himself as a history nut with a guitar.

There is a long historical tradition of using music to convey history. And often there are parallels between aspects of history and what currently might be happening. Harrison points out the parallel in the ’70s, where religious militants in Iran were whipping themselves in the same way religious militants had done in the Middle Ages in Paris.

While he has written a few songs, and will include a taste of them on Jan. 30, he doesn’t mainly think of himself as a singer songwriter. He does describe a protest song he wrote and performed about hydraulic fracturing where the chorus includes the words:

Harrison has created and produced one CD, titled “Historical Ballads,” and several of those songs he plans to play at his show in Basalt.

Some of the songs include: “John Barleycorn,” the traditional English folk song; “The Devil's Nine Questions,” where the devil tempts a young girl; the Scottish song “Three Craws”; and “My Good Old Man,” a ghost story.

While he likes topical and historical songs, Harrison finds some subjects hard to work into music, such as climate change.

“Climate change is huge, but it’s hard to get into a song,” he notes.

But his interest in the environment led to him to meeting and going on tour with the acclaimed environmentalist and author Edward Abbey. One day Harrison was hanging out in a folk club in Denver where he occasionally performed, when a man walked in and asked the performers gathered in there in their off-hours if anyone could play lead acoustic guitar and go on a tour. Harrison did play lead acoustic guitar and he was chosen.

Along with other performers like Michael Martin Murphy, a small group toured Colorado, New Mexico and Utah and spoke about protecting the environment of the Canyonlands area in Utah. In Santa Fe, Edward Abbey joined the group and the tour, and they continued on to Utah where he read a short story, “God's Plan for the State of Utah.”

John Harrison will play flamenco and classical guitar and sing at the Basalt Library, Thursday, Jan. 30, from 5:30-6:30 p.m. Admission is free.