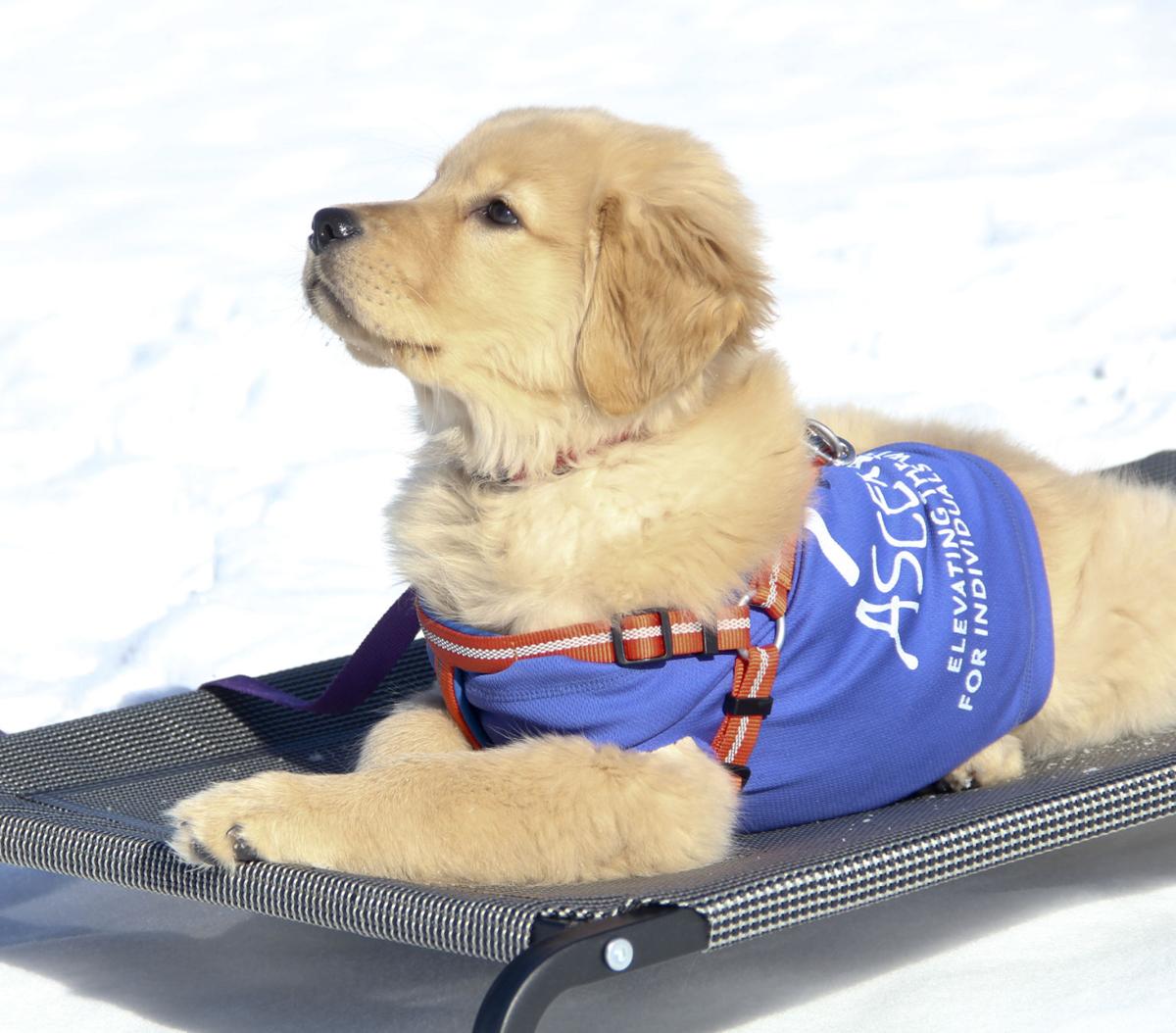 Lilac takes a break in between training sessions. Mathew McCabe says he finds the relationship between a handler and a dog to be a powerful one. 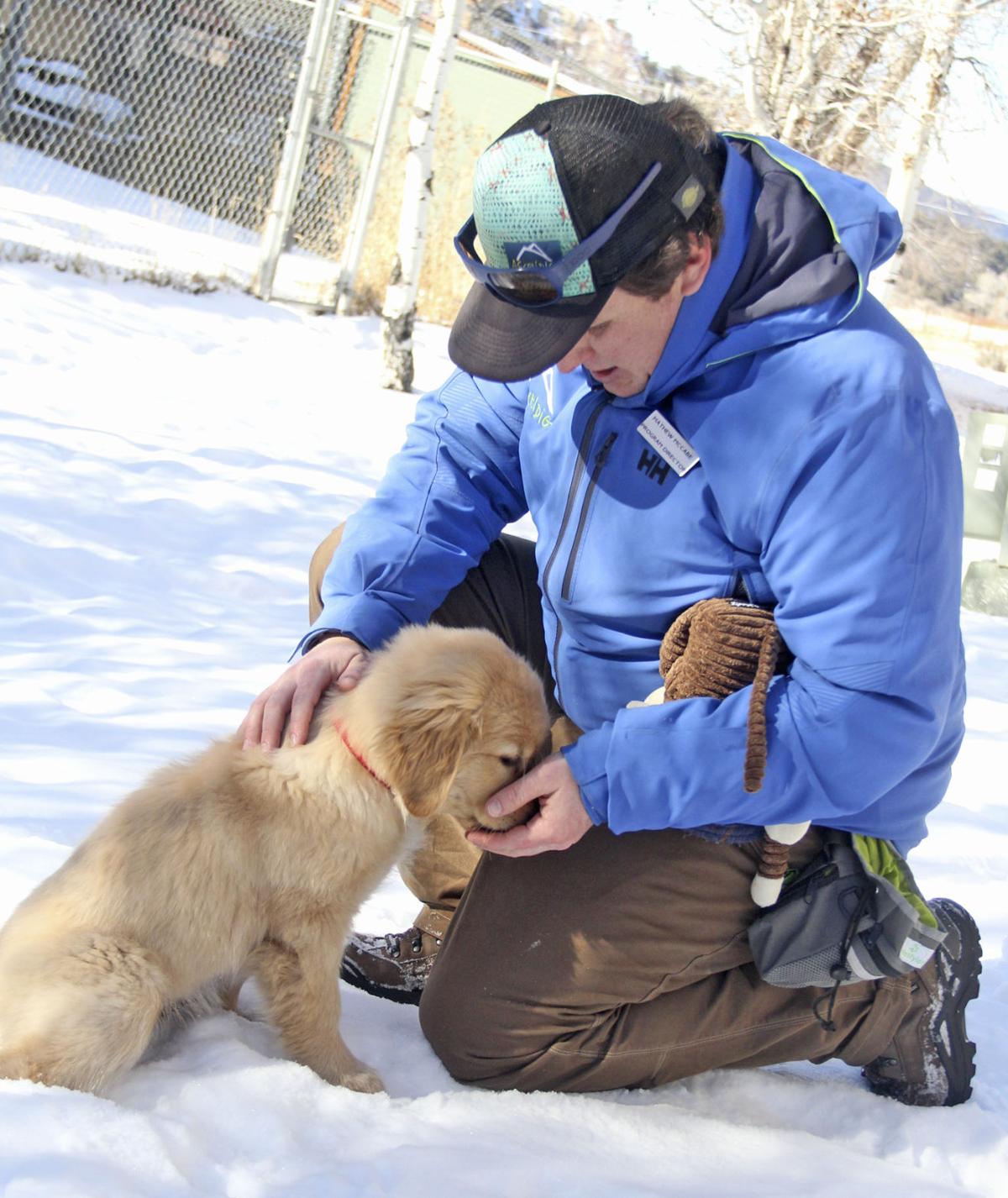 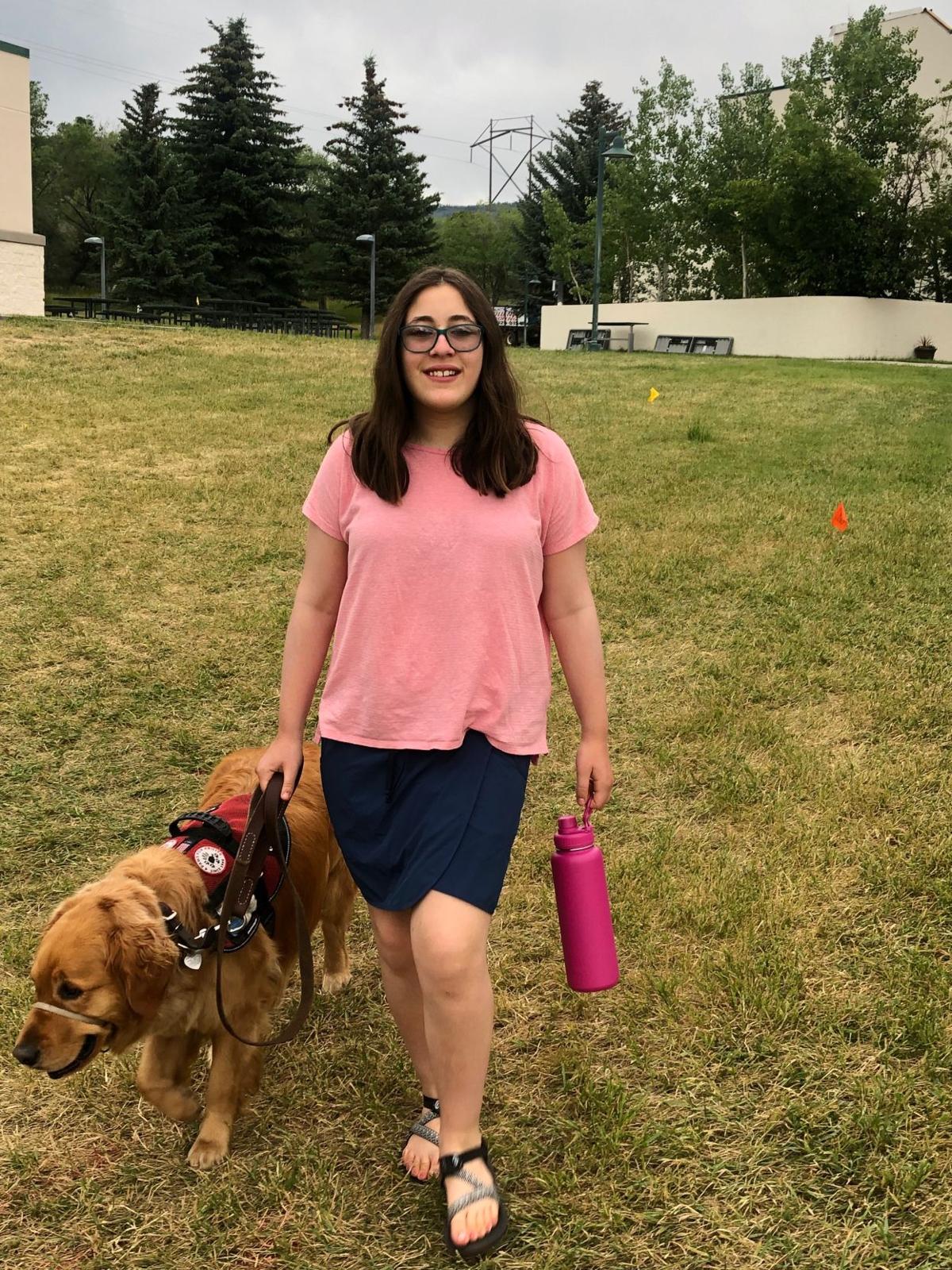 Folbe Butler, 13, with service dog Toad, who will eventually attend high school with her.

The river bank is drenched in chaos. Rafts, kayaks and SUPs seem to pile upon one another as their humans scramble like swamped ants, loading and unloading gear.

Taylor Swift’s high whine pouts another song about “Me.” A diesel revs and a young boy perched to the side of the take out starts moaning. Atop a river-smoothed cottonwood trunk, he begins to rock, self soothing.

Nearby, a Golden Retriever’s ears twist and perk like antennae. Sensing the boy’s distress, the Golden approaches from the front and rests his head on the boy’s knee. The 75-pound fur ball shares a deep, brown-eyed gaze with the boy, who slowly stops moaning. The dog curls up at the boy’s feet. Sliding from trunk to the sand, the boy’s hand dives into the thick fur beneath the Golden Retriever’s red vest emblazoned with “Service Dog.” The two of them relax in the dappled shade as the chaos continues to unfold around them.

As a therapy dog, a Golden Retriever such as this would have undergone a lengthy training period to meet the specific needs of its autistic clients. Mathew McCabe is the Director of Adventures and Curriculum with Ascendigo, a Valley nonprofit providing opportunities for growth and independence for those with Autism Spectrum Disorder (ASD).

McCabe is newly, madly in love with Lilac, an 11-week old Golden Retriever puppy he is training to be what he calls “twice exceptional,” a therapy dog for Ascendigo clients and a service dog for himself.

That’s right— a service dog for himself. After working with Ascendigo for 10 years, McCabe was recently diagnosed with PPD-NOS, “pervasive developmental disorder, not otherwise specified.” He has a rare form of autism also known as “twice exceptional,” or 2e.

Growing up, McCabe always knew he was different. He was gifted and excelled in many areas, including leadership, compared to his peers. But he was also conscious of certain disabilities. In a catch-22 of sorts, those sensed but undiagnosed “disabilities” drove McCabe to excel even more.

Ten years ago, McCabe intended to work with Challenge Aspen and Wounded Warriors, but in a twist of fate, he was recruited to Ascendigo to be an adaptive sports instructor. He has since risen to his current position, heading both adventure sports and curriculum development. In those 10 years, he also began working with Folbe Butler as a 3-year-old.

Folbe traveled to the Roaring Fork Valley twice a year to ski with McCabe and to attend Ascendigo’s Summer Adventure Camp, which is based at Colorado Mountain College’s Spring Valley campus. Eventually, the Butler family moved to Aspen.

The Butlers had been urged to secure a service dog for Folbe, and after a few years of resistance, they signed up. Two years later, Folbe received her own Golden Retriever, whom she promptly named “Toad.”

“The bond is so subtle, and it takes a long time,” says Folbe’s mother, Marla. Her voice is husky, filled with the pensive awareness of their journey. “This is her third year with Toad, and she’s way more attached than she appears, verbally. When you start to really look, you can see Toad is constantly aware of Folbe, and she of him.”

Toad puts Folbe, now 13, to bed each night, curling up with her long enough to ensure she is asleep, before jumping down. Like most beautiful Goldens, Toad attracts a lot of attention, which Folbe is not yet ready for. Eventually though, he will go to high school with her each day, so there is more training to do. The service training relationship is three-way— the parent/dog handler, the child and the dog. It’s not easy.

“I cling to words to make sense of the world, and with Toad, it’s nonverbal. I was able to get to that place through Toad, but not with Folbe. It was a lot of letting go, and through that letting go, it’s becoming more consistent. Toad’s my own therapy dog. Our family’s therapy dog,” Marla says.

A notable breakthrough occurred last summer, when McCabe felt ready to work with an ASC-trained service dog and requested Toad for the summer. A decade in, McCabe considers the Butlers as family.

“They’re my angels. It’s amazing the impact they’ve had in my life,” says McCabe.

“We left Toad with Mathew for the summer. Toad and Mathew really connected, and now Mathew’s on his own journey.” The hint of a smile carries through the phone line from Marla’s end.

“Their Golden is the reason I have a Golden,” says McCabe.

After his own long, impatient wait of a year and half, McCabe journeyed to Loveland in November, to take receipt of Lilac from the breeders Golden Endeavors.

“Training a dog is so much richer than I expected — the highs, the lows — it’s 24/7. When we realize we’re actually listening to each other and she accomplishes something successfully, we’re both like, “holy shit!” To see her so proud of herself!” McCabe’s expression is pure glee.

He is smitten. At 12 weeks and 20 pounds, Lilac is a muppety fluff ball and all puppy. He takes her out two times a day for fresh-air training walks. They’re focusing on basic training — heel, come, stay. With a hip holster carrying food, he hand feeds her rewards.

“When I’ve tried feeding her in her bowl, she just stares at it, overwhelmed,” says McCabe.

As they’re walking along on the squeaky snow, young Lilac is torn between smells, flopping in snowbanks and following her handler’s cues for the treats.

“Lilac. Lilac, heel.” She prances over, nose up, chest out, eyes just for McCabe. “Good girl!” he says, handing her kibble. “Just yesterday, she only made it about this far,” he says, indicating our position on a quiet county road in the mountains. “Let’s see how far you go today, Lilac!” he says with encouragement.

McCabe finds the relationship between a handler and a dog to be a powerful one.

“They mirror our internal world. They’re a reflection of our central nervous system,” he says.

As such, McCabe is quite deliberate with Lilac. Her kennel inside his van is her “favorite place in the whole world.” When she first hops in, she knows she’s about to go outside, have adventures and explore the world. It’s where she recovers after the strain of training, which leaves them both tuckered. McCabe monitors her energy levels and attention every waking moment as he contemplates what skills he wants her to learn and how he’s going to teach her.

ASD therapy dogs can be trained to track a person who wanders. Tethered to a dog, a child will maintain their own ambulatory independence as the dog “walks” the child. To manage moments of frustration or anxiety, Lilac can be trained to apply heavy, comforting pressure by leaning into a person, or even lie on top their lap.

Lilac can also be trained to lick kisses or snuggle when an Ascendigo child cries. For himself, McCabe will train Lilac to sense when he is stressed or overwhelmed, and come lie at his feet, where he can connect with her.

McCabe’s way of rewarding Lilac will be a routine she can rely on, lots of exercise to blow off steam, and the rewards of loving companionship.

“People with ASD struggle to make connections, to maintain friendships, to socialize,” says McCabe. “Service dogs help. When one of our clients has a service dog on the street, everyone loves a dog. People will come up and say ‘Hi,’ and pet the dog.”

The experience is proving so rewarding and comforting for McCabe, he is considering a future in training ASD dogs. Discussing his work and what it means to be living the life he lives through Ascendigo, warm salt water shimmers above a wet rim of lashes, and he stares off for a moment. Lilac squirms in his lap, nuzzling McCabe’s face, perhaps reminding him of all the work they have yet to do.

McCabe directs 10 weeks of summer camp, for 24 campers and 48 counselors (two for each camper, night shift and day shift) plus additional staff.

Summer camp is the highlight of the year for many of the Ascendigo kids, most of them returning each year. Between horseback riding, wakeboarding, rock climbing, rafting, kayaking and paddle boarding, it’s the only extreme sports camp in the nation for those with ASD. As with anyone, these sports or the environment can overwhelm at times, or trigger anxieties.

And if McCabe and Lilac have anything to say about it, everything is gonna be alright.