You are the owner of this article.
Edit Article Add New Article
You have permission to edit this article.
Edit
Home
News
Schools
Sports & Recreation
Business
Arts & Culture
Opinion
Photos
Aspen Daily News
Share This
1 of 4 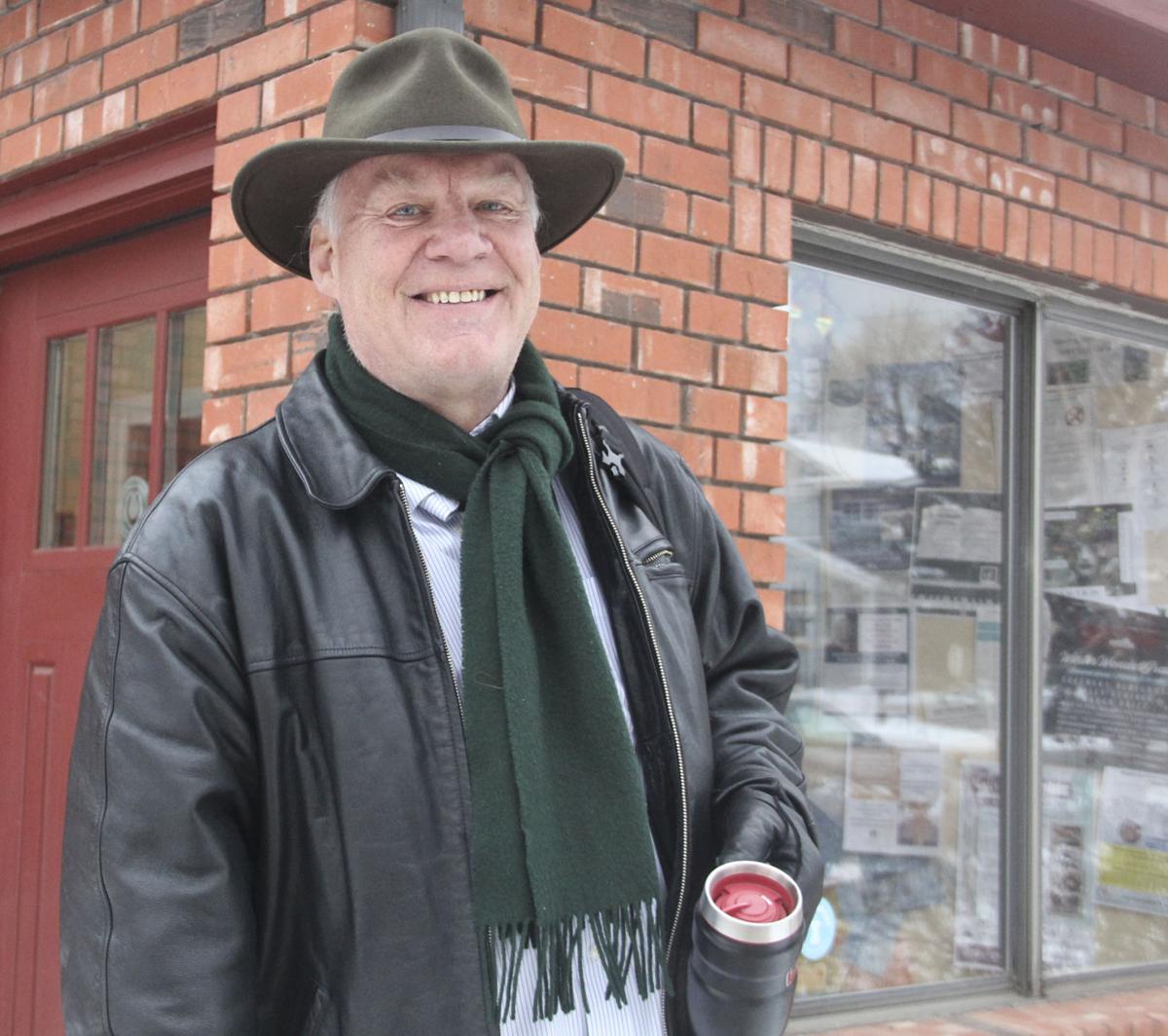 Early-morning risers in Carbondale might catch Steve Cole heading into KDNK for his two-hour shift. The nonprofit radio station is staffed by a handful of paid personnel, plus more than 60 volunteer DJs. 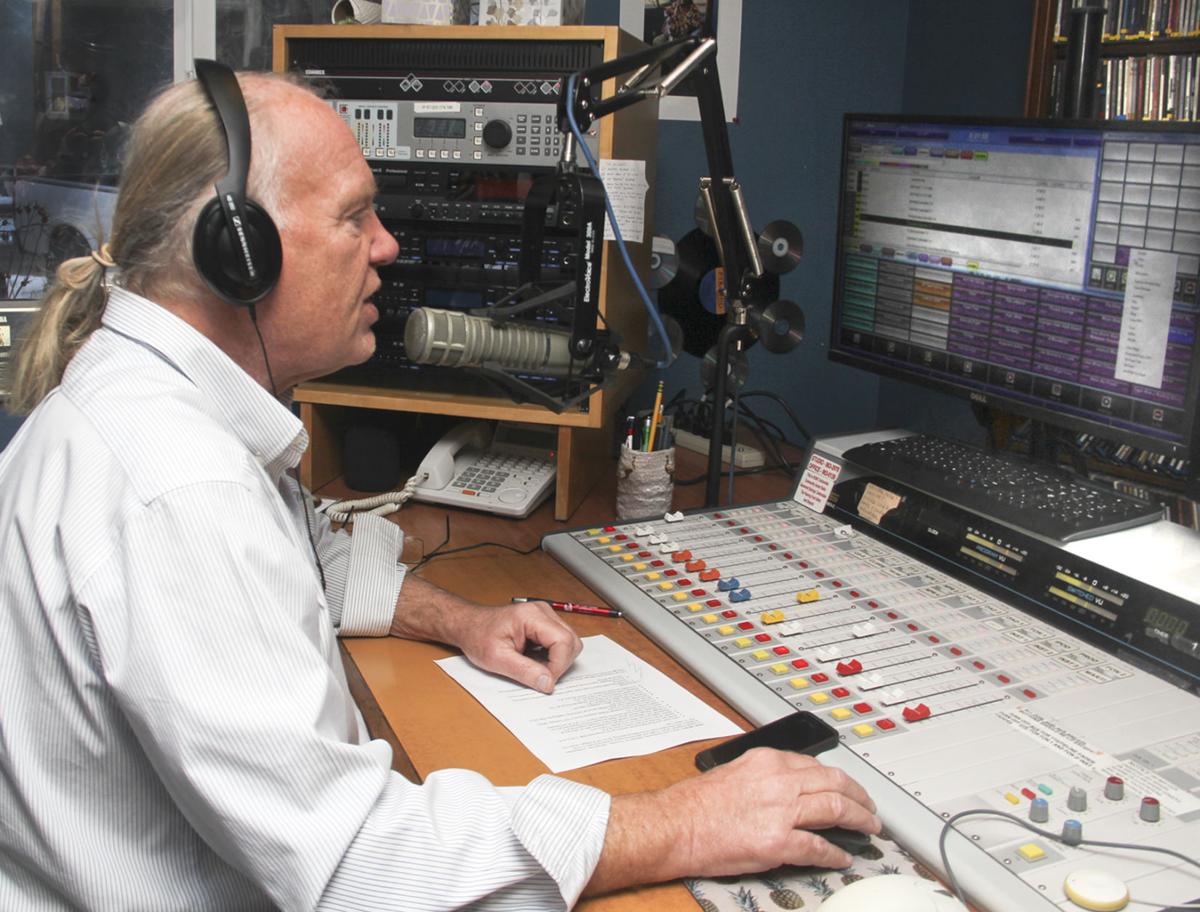 National Public Radio on KDNK wouldn’t be the same without Steve Cole’s smooth and sometimes improvised announcements every 15 minutes. Likewise, the longtime Valley resident’s voice rings true on everything from radio jingles to bus announcements. 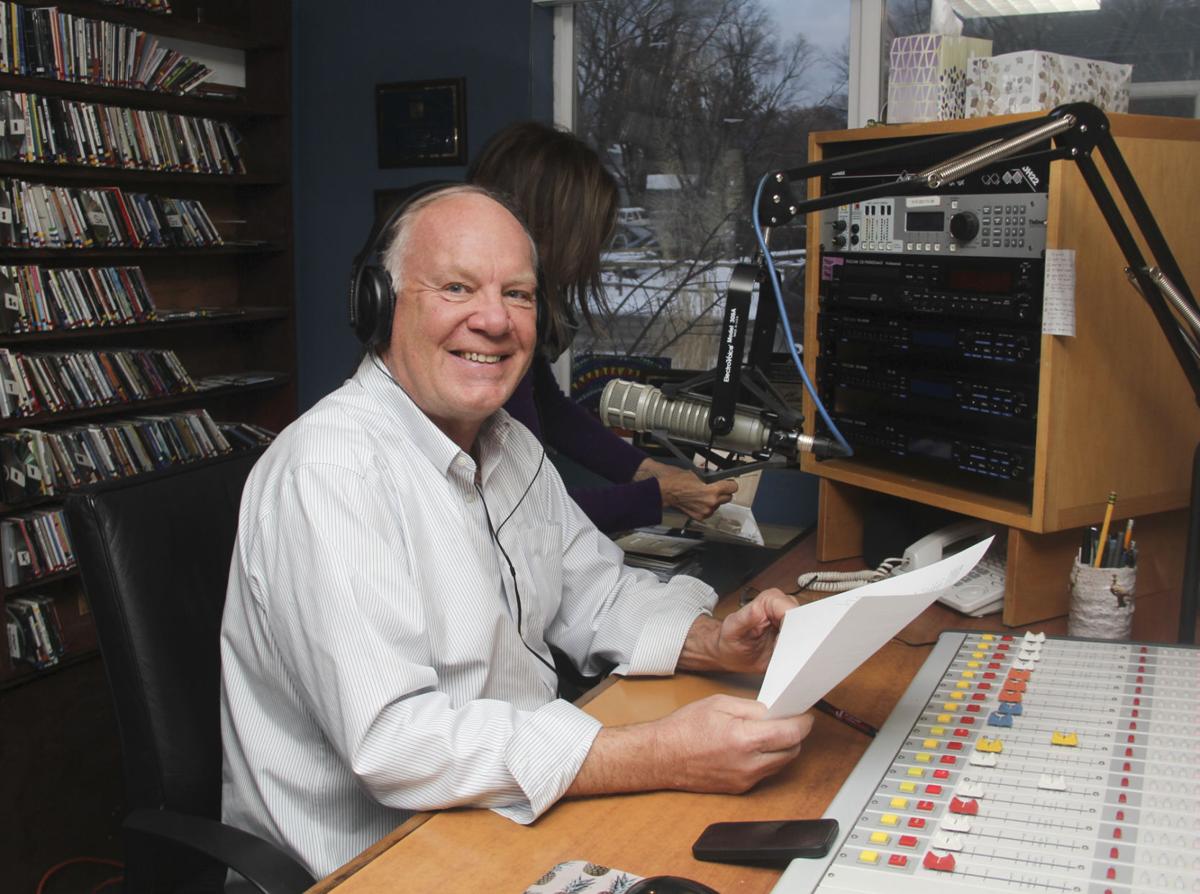 Steve Cole’s trip as RFTA’s announcer began when fellow KDNK DJ Phil Schultz recommended him for the job. Schultz worked for RFTA and was familiar with Cole’s vocal qualities. 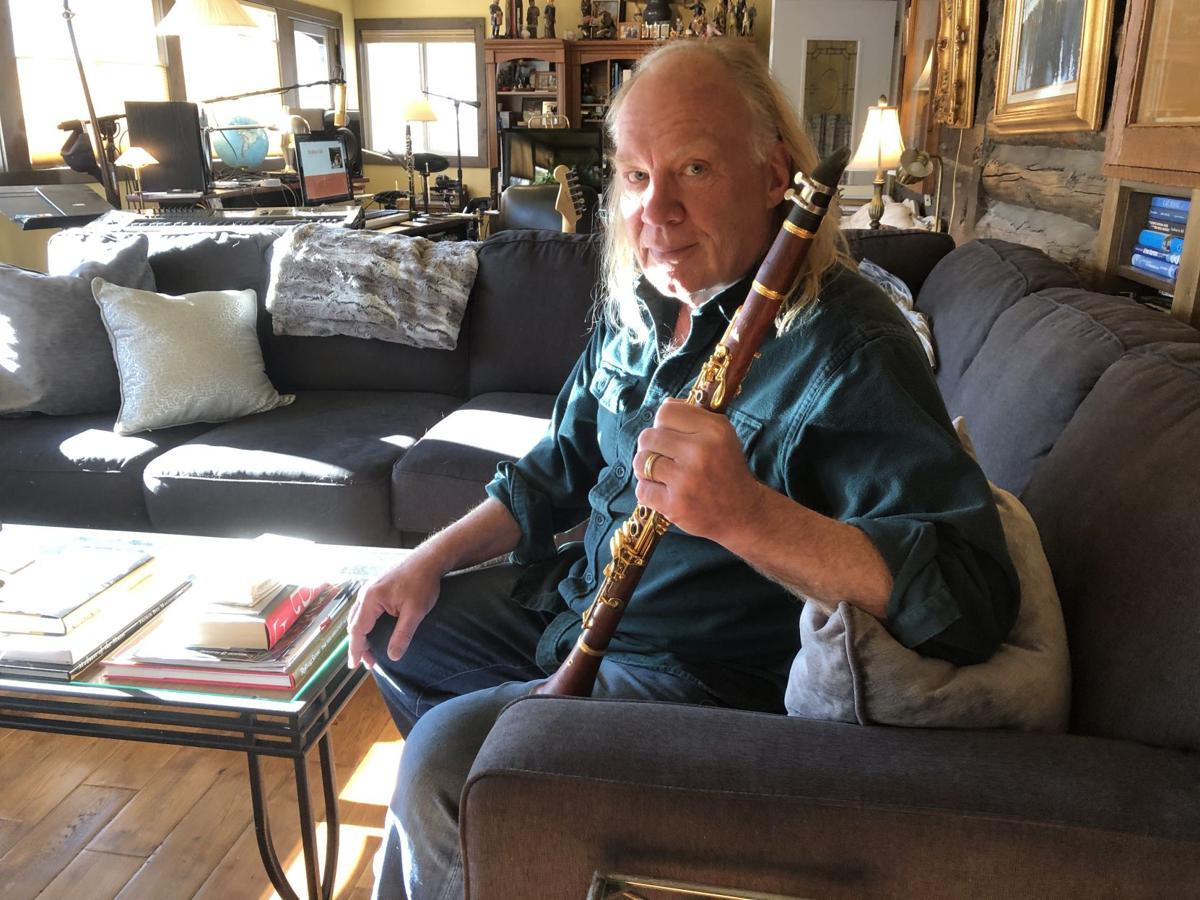 Producers used a Steve Cole composition for a made-for-television Hallmark film. Locally, he’s the voice in radio jingles for businesses such as Eagle Crest. He also shows up on saxophone and keyboards in local bands.

Steve Cole found himself in the middle of Aspen’s golden age of bands in the early 1980s, and has a theory about why well-known rockers like Billy Gibbons (ZZ Top), Glenn Frey (Eagles), James Burton (lead guitarist in Elvis Presley’s band) and others liked to sit in with the group he was with (the Bobby Mason Band).

“They were used to playing in front of five, 10, 20,000 people, but I think they liked the eye contact, the personal contact of playing for maybe 200 or 300 (at places like Paddy Bugatti’s). It’s more intimate. You get more back when you can see the people,” he continued.

Cole blew into Aspen on a whim in the “dry ski season” of 1976-77 and other than a year’s “sabbatical” in New York City, has been a fixture on the local music, radio and broadcast-advertising scene ever since.

Some sharp-eared RFTA passengers recognize Cole as the voice who makes lilting announcements for stops such as “The El Jebel Park and Ride,” “Willits Lane,” “Hopkins” and dozens of others. With his deep, soothing pipes, Cole’s “Stop Requested” comes across like “We don’t mind stopping the bus just for you … . Would you like some hot apple pie with that?”

Cole, 68, first arrived in Aspen after graduating with a political science degree from the University of Denver, where he was in the same Phi Beta Kappa class as former U.S. Secretary of State Condoleezza Rice.

With saxophone in hand, Cole sat in on a gig his first night in town, and was riffing in a recording studio on his second night.

“I was having so much fun … I said ‘I don’t think I’m going to law school now.’ My three-day vacation has lasted 44 years.”

Cole and his wife, Christine Lester, live in one of the Roaring Fork Valley’s oldest ranch houses, located on the old Highway 82 between El Jebel and Catherine Store. He likes to point to the hand-hewn “Davy Crockett”-style logs that were once the back wall, which now face a 25-foot wide add-on room that contains: His two couches, a dining room table, lots of books, beds for two cats, dozens of his dad’s paintings and carvings, various music instruments plus his grandfather’s World War I uniform (which Lester framed and hung on the wall). “He was from Northern Ireland … was wounded and spent the night on the battlefield.”

His son, Anderson Cole, is 28 years old. He was Aspen High School’s starting football quarterback for three years under coach Mike Sirko, and led them to the state football playoffs for the first time since the mid-1970s.

These days, Anderson works for Backroads, taking clients on camping and adventure trips in national parks, most recently to Glacier National Park in Montana. This winter, he is working as assistant manager at Miller Sports in Aspen. “I’m very proud of this great young man,” Cole said.

A native of Des Moines, Iowa, Cole first started taking piano lessons from Mrs. Hulshizer in fourth grade: “We used to have little skits at our recitals. One time I had to dance around in a Cossack costume.”

In fifth grade, it was on to a group recorder class. He graduated to clarinet after that and was in the all-state high school band for two years.

“I didn’t have to march (at games) because I was on the football team,” he says.

One time in high school, before a concert, Cole broke his clarinet mouthpiece and had to borrow one from his family’s doctor, who lived down the street. “He played with (big-band drummer) Gene Krupa.”

Backtracking to ninth grade, Cole said he got to join the school’s cool rock band “because I could play the horn lines for ‘Hold on I’m Coming,’ ‘In the Midnight Hour’ (and songs like that).”

The band’s parents would haul them around Des Moines for gigs at fraternity parties at Drake University and other locations. Their name was “Benedict Arnold and the Traitors.” They dressed in ruffle-fronted shirts and wore tri-folded Revolutionary hats ala the band Paul Revere and the Raiders. “We ditched the costumes when we got to high school.”

One of Cole’s music breaks came in the early 1980s when he hooked up with the Bobby Mason Band, which Mason started after the legendary Starwood broke up. Cole said the Aspen-based Starwood signed with Columbia and recorded an album at Caribou studio near Boulder, where Elton John, Steven Stills and other big-time acts produced some of their best-known work.

“They (Starwood) broke up before they could have … “. He paused and said, “They flamed out early. Much too soon.”

Fueled by hundreds of hard-partying locals, and a constant cycle of skiers and well-heeled tourists who wanted to be part of the local scene, downtown Aspen was a happening place. Venues included Paddy Bugatti’s in the Continental Inn at the base of Aspen Mountain, Jake’s Abbey and Chisholm’s Saloon on Galena Street, the Paragon Ballroom on the Hyman Avenue Mall, Andre’s and other bars and clubs. There were enough gigs to keep dozens of musicians busy and earning enough money to pay the rent, maybe buy a home and generally settle in. “There were six or seven places (to play) within a three- block radius.”

Then as now, Aspen attracted more than its share of celebrities. An encounter with singer/songwriter Jackson Browne at Paddy Bugatti’s produced the following story.

Browne was in the bar one night and Cole sat down to “chat him up” during a break. The next day was too snowy for flights to take off, so anyone who wanted to leave town would most likely have to take a cab. Cole saw Browne in the Pitkin County Airport and tipped off a cabbie he knew of his presence. Later the same day, Cole had to drop off his VW Squareback at the Conoco service station at Snowmass to get worked on.

He was hitchhiking back to where he lived in Lazy Glen when lo and behold, along came a cab carrying Browne, his then-partner Daryl Hannah and Browne’s son, heading downvalley toward Denver. And the cab driver who Cole had told about Browne stopped to pick him up. “The driver later told me he wouldn’t have stopped, but Jackson Browne said ‘I know that guy’ so he did.”

Cole has lots of other stories about Aspen’s music scene during its heydays, plus recollections as music and programming director for KSPN, and DJ for KSPN and KNFO.

These days, he’s the 6-8 a.m. DJ for community access radio station KDNK in Carbondale, where he reads the community calendar and makes announcements between National Public Radio breaks.

Cole also has his own KDNK show every other Tuesday morning.

Cole still plays lots of music (often with Bo Hale) and as a duo with vocalist Roberta Lewis. When he and Lewis expand to a quartet with David Bluefield (keyboard/bass) and Billy Harmon (drums), they turn into the Uptown Strutters.

With a deep, friendly voice that is known to radio listeners up and down the Roaring Fork Valley through his commercial work, Cole also occasionally gets noticed in the grocery store checkout line and other places. “Someone will hear me speak and ask, ‘Are you the voice on the bus?’”

You might know Steve Cole’s distinctive, but not too slick, voice from local radio commercials for Cracks ‘N’ Racks, Eagle Crest Nursery, Crystal River Spas and other companies.

To find out more about Steve Cole and his music, go to www.stephencolemusic.com.