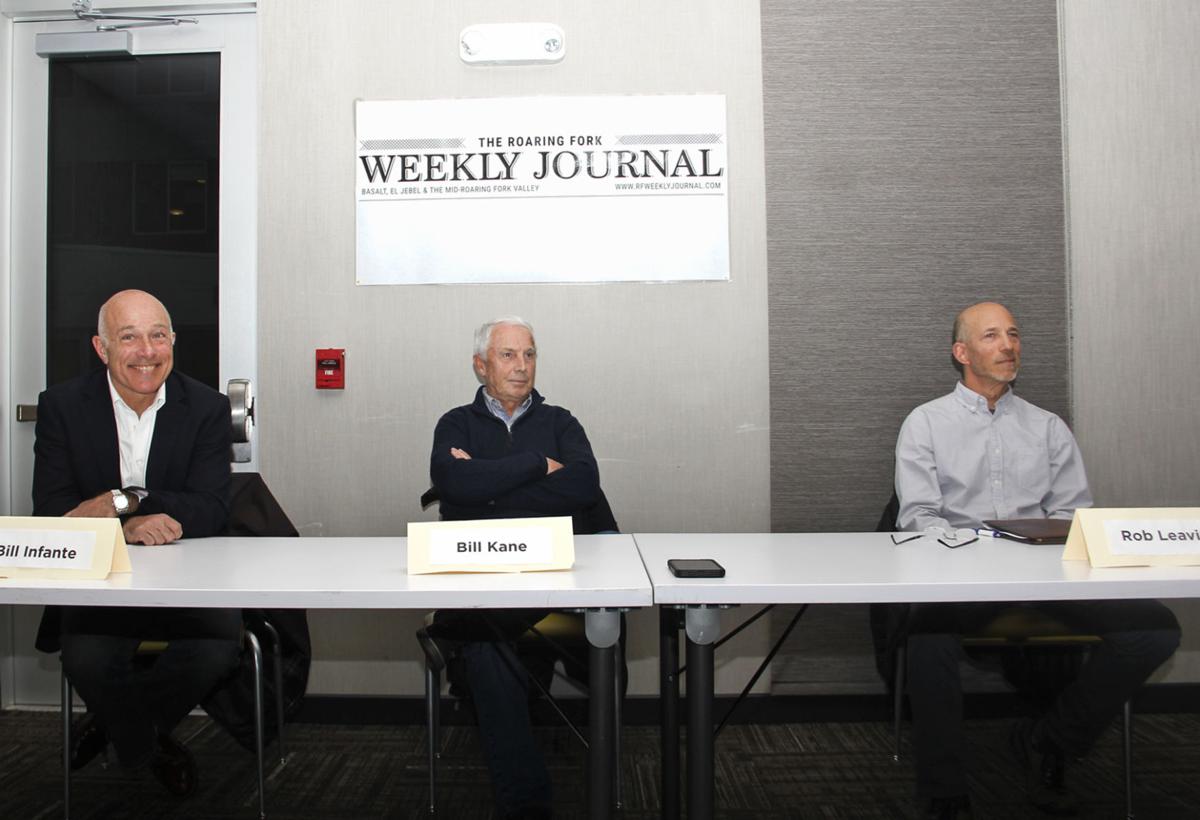 The three candidates vying to become Basalt’s next mayor, Bill Infante, Bill Kane and Rob Leavitt, kept it congenial during the Feb. 10 forum at the Element. The council candidates’ forum on Feb. 24 will be held in the Sopris Room of the El Jebel Community Center (Eagle County Building). 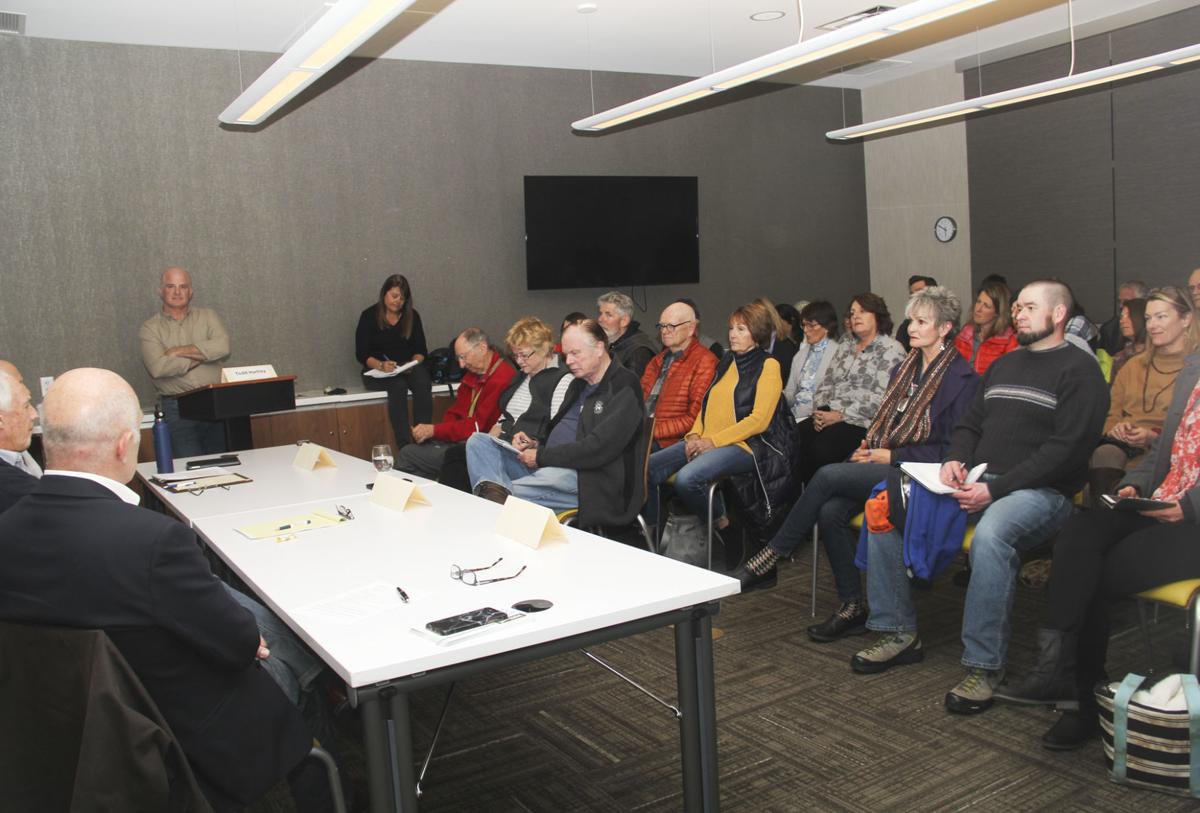 Despite blustery weather, the mayoral forum attracted a standing-room-only crowd to the Element, which included two former Basalt mayors, one current mayor, a handful of kids and two large dogs.

The first candidate forum for Basalt’s town election on April 7 turned out about 50 interested listeners this week in the meeting space at the Element hotel in Willits Town Center. For nearly two hours, mayoral candidates Rob Leavitt, Bill Infante and Bill Kane took questions from moderator and RFWJ Correspondent Todd Hartley, who injected a little levity into the oftentimes dry, political talk.

Over the course of the forum – the first of three that the Roaring Fork Weekly Journal will sponsor or co-sponsor (please see related story) – the candidates covered a wide range of subjects important to local residents and explained their positions on the issues, including the proposed Pan and Fork development and the Basalt Gun Range. They also answered the question, “What do you want the future of Basalt to be?”

While the national political landscape screeches with partisanship, the Feb. 10 forum was a refreshing change as all three Basalt mayoral candidates treated one another with marked respect and civility, employing a little levity and lightness into the weighty issues.

The evening began with the mayoral contenders giving mostly brief snapshots of who they are. Infante has 25 years of service with the U.S. State Department, the U.S. Agency for International Development and the United Nations. Infante is a current member of the Basalt Town Council and a local businessman who imports handcrafts and other products from Mongolia.

Kane is the former planning director of Fort Collins and Aspen, and a former Basalt town manager. Kane previously worked for the Aspen Skiing Co. and currently is a consultant with Design Workshop.

Leavitt is a former member of the Basalt Town Council and currently sits on the Basalt Planning and Zoning Commission. Leavitt is president of Crimson Construction, Inc., a general contractor, and is a professional ski instructor at Aspen Highlands.

Leavitt kicked off the discussion about the proposed Pan and Fork development along the Roaring Fork River.

“We started what to do with the park in 2012,” said Leavitt. “But at that time we were talking about 150,000 square feet on Two Rivers Road... In the long run, I think we came out with a much better product with 50,000 square feet, Art Base, the restaurant and much bigger park views.”

In the discussion about whether or not the town should purchase a little over one acre to expand the current park, Leavitt said he felt it was a good use of Basalt’s POST (Parks, Open Space and Trails) funds.

Similarly, Kane expressed a positive opinion for using POST funds by the town in order to purchase the land to expand the park along the river.

While Infante said he didn’t have a position on the purchase, and that he would defer to experts, Infante did question the appropriateness of expanding the park and cutting off the development from Midland Avenue.

On the issue of whether or not they would support a development moratorium because of the large number of units that are currently in the development pipeline in Basalt, Willits and surrounding areas, Kane supported a growth management component in the town’s current comprehensive planning efforts.

He views growth management in two ways, allowing the citizenry a way to articulate their vision for where things should go and, at the same time, allowing the town to see whether or not it has the infrastructure to serve future development.

Infante’s stated position is that we can’t manage growth by ourselves, and that we should be working with surrounding communities along with Pitkin, Garfield and Eagle counties to manage growth in a comprehensive way.

Stated Leavitt, “I don't think much of moratoriums. They tend to sound good, but they tend not to work well. I personally don’t think we need any massive developments. I think small, (properly paced) developments do our town much better.”

Moving quickly through other topics discussed and the candidates’ positions from Feb. 10: On the issue of what Basalt could be in the future, both Kane and Infante supported attracting more knowledge, and environmental-based organizations to the community, while Leavitt would like to see world-class outdoor activities along with sustainable and thoughtful development.

On the issue of whether or not Basalt should support annexing some of the land parcels surrounding town, Kane and Leavitt supported talking with each landowner on a case by case basis, and Infante pointed out how disenfranchised some of those surrounding landowners and developments feel.

How to address traffic congestion in the Mid-Valley saw agreement amongst the three candidates. Leavitt offered a future where jobs in Basalt make it possible for people to not have to drive Upvalley. Kane proposed a new mobility system for the Mid-Valley utilizing RFTA stops for a platform-based ride share program.

Infante injected a little humor by stating he would hire Kane to come up with the technical solution to traffic. He also believes, like Leavitt, that more jobs in Basalt lessens traffic headed Upvalley.

On the question about whether they have connections to developers and the development community and potentially a conflict of interest, Infante stated he has no connections to any developers.

As the president of a construction company, Leavitt works in the development industry, but he stated he has no connections or conflicts to any developer.

Kane has worked in the development industry over multiple decades and has many connections, including a connection to the current developer and architects on the Pan and Fork development because of his previous work with Design Workshop and his previous stint as Basalt town manager. Kane stated he has no conflicts regarding any current proposed project in Basalt.

The three mayoral candidates restated their overall positions on the issues and their hopes for the future of Basalt in their final remarks.

The Basalt election is April 7.

The next candidate forum is on Feb. 24 at the El Jebel Community Center from 5-7 p.m. with the candidates for Basalt Town Council taking questions and expressing their views and positions. Six candidates, incumbent Jenn Riffle and challengers Glenn Drummond, Tiffany Haddad, Elyse Hottel, David Knight and Kirk “Dieter” Schindler, are competing for three seats.

Forum questions directed to the six council candidates may be sent in advance to madski@rfweeklyjournal.com.