Skip to main content
You are the owner of this article.
Edit Article Add New Article
You have permission to edit this article.
Edit
Home
News
Schools
Sports & Recreation
Business
Arts & Culture
Opinion
Photos
Aspen Daily News
Share This
1 of 5 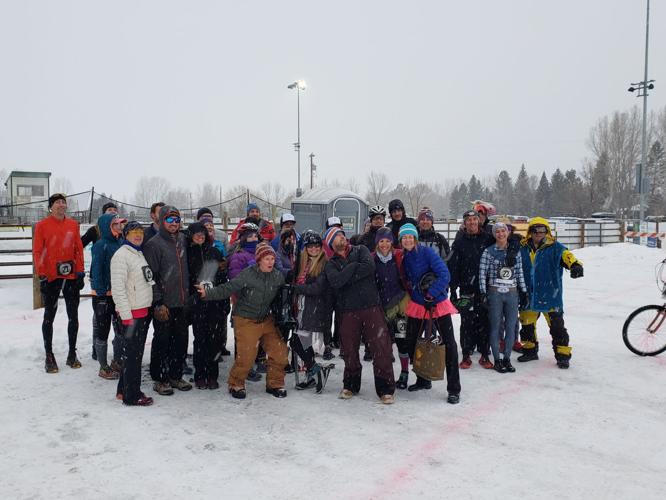 All the 2020 competitors in the 2nd Annual Full Moon Winter Triathlon assemble for a group photo before the start of the Jan. 11 race. 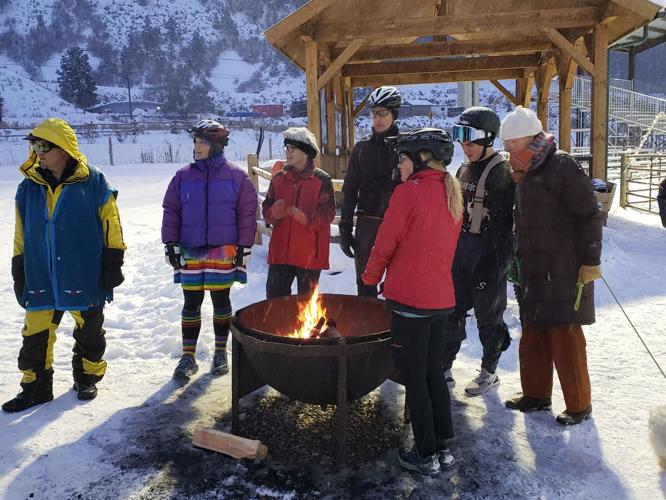 Several fat bike riders stay warm around the fire pit, waiting for their cross-country skiing teammates to tag them, to begin the triathlon’s final leg. 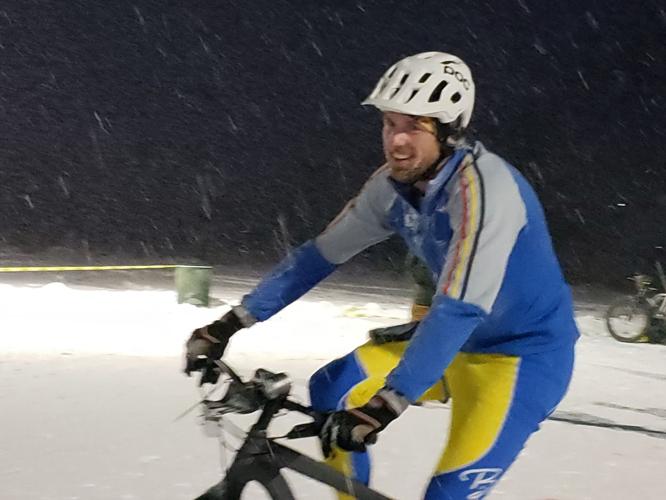 Solo competitor Ben Koons was first to finish the Full Moon Winter Triathlon in 2020. Koons completed the event in a time of 59 minutes, 49 seconds. 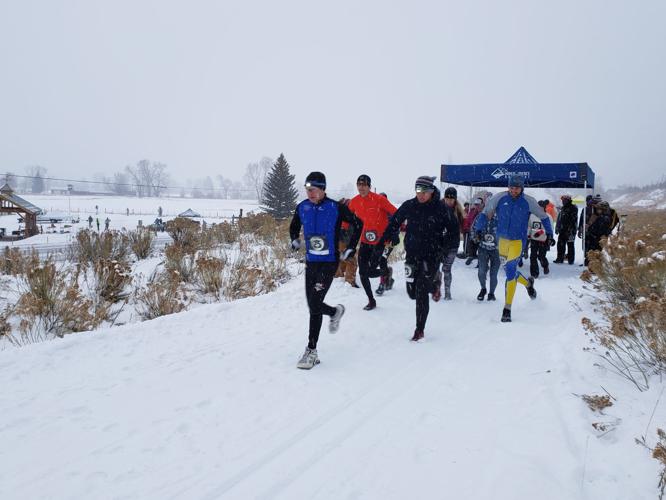 The official start of the 2nd Annual Full Moon Winter Triathlon Jan. 11, with competitors embarking on a 3.5k run from the Carbondale rodeo grounds to town and back. 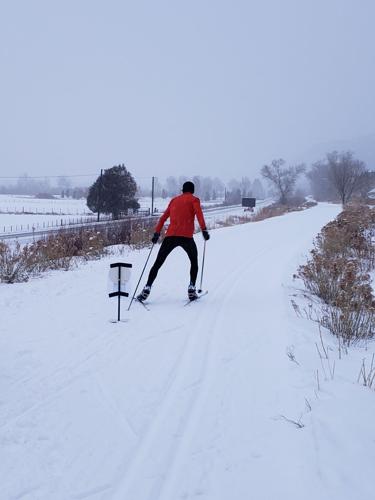 Margaret Donnelly had a big idea. Now, after two years, it seems to be going over big, and getting bigger.

Donnelly is the Health and Wellness and Aquatics Coordinator for Carbondale Parks and Recreation. “My job is to find healthy things for the community to do. I’ve done the Ironman and some other triathlons, and I’ve always loved them. Of course, Carbondale and the surrounding area are sort of known for extreme stuff, and I’d always wanted to put together a local triathlon,” she said.

“So we were looking at the space we have, with 23 parks. I fat bike and love to cross-country ski, and so many locals love to trail run. So I came up with the idea of the Full Moon Winter Triathlon, thinking it would be really fun to at least attempt.”

The second annual edition of her brainchild went off around the Gus Darien Arena, the local summer rodeo grounds, on Saturday, Jan. 11, and appears to have been successful, certainly if measured in the amount of fun the competitors and their families and friends had.

Donnelly said, “I was looking to do something that’s not a 5k, because there are a lot of those, and not the full moon cross-country ski and dinner. I didn’t want to rival anything, but just build with an unusual event. So we picked the Saturday nearest the full moon, and it’s the Full Moon Winter Tri. We start at 4:30, when the full moon traditionally rises. We do a run of 3 ½ kilometers to Carbondale and back, then it’s a 5k cross-country ski, classic or skate, to Catherine Store Road and back. Then we set up a mile-long bike track all around the rodeo grounds, and they ride three laps, and start a fourth to make a 5k.

“We foot-stomp it all and have a really great time, and we can change the bike course every year. People can run all three legs on their own, or they can have a team of two or three people, with specialists in the particular events.”

How did her vision come together, beginning in 2019? The way so many do in our area – sponsorship.

“I partnered with Independence Run & Hike because they now do cross-country skis. Last year was their first year for that. Then we partnered with Aloha Mountain Cyclery for the fat bikes. This year they offered their demo bikes for free.”

Even that much generosity from merchants doesn’t quite take care of everything, though. Donnelly added, “I loan out two of my personal bikes, my co-worker Jessie has loaned out her bikes – we just really wanted to make the event happen. We just love the excitement.”

The event’s growth so far is clear.

“We already have five more teams than we had last year,” she pointed out. “The first event had 11 teams, which I thought was a very good inaugural turnout. This year we had 16 teams including some individual competitors. Hopefully it’ll just keep growing each year.”

Donnelly noted that sure, it’s off the ground, but she still has some vision left to add.

“If we could get 50, 60, 70 racers, then we could start getting, say a food cart to come out, potentially a band to come out, start having a really nice full-moon party. We have room to grow, so that’s nice.”

The lunar aspect will remain a key, she says. “It’ll always be the closest Saturday to the year’s first full moon, so if folks want to plan now to come out as spectators next year, they’ll be welcome.”

This year the audience appeared to be mostly limited to competitors’ families, significant others, small kiddos and pets, but everyone seemed to have a good time.

The fun factor was apparent, with competitors wearing everything from Carhartts to competitive racing tights, to tutus. One team even got in the spirit by getting their own team caps made.

The “Speedy Trialers” were a squad of three Garfield County judges, wearing sensible waterproof pants and coats besides their hats – those robes could easily get tangled up in their skis or the bike hardware – but still all in black.

Judge Jim Boyd called himself “more of a recreationalist” than a super-competitive athlete, taking the cross-country leg for his team. He assessed his chances beforehand with a big smile and said, “I expect to be good enough to finish.”

Optimism is always a positive. Magistrate Susan Ryan, who specializes in water law, led off with the 3.5k run for the team, and Judge John Neiley anchored it on the biking leg.

Boyd added, “We’re just really excited to be part of this event. Too bad the moon’s not shining, though.”

Indeed, we were assured it was up there, just obscured by the overcast that was providing a new coat of snow to the Valley that afternoon and evening.

Getting competitors fitted with fat bikes beforehand was the job of the man who provided most of them, Aloha Mountain Cyclery co-owner Nick Degross.

He shared the key factors for riding success in the triathlon’s final segment.

“Tire pressure’s quite important, especially as snow conditions change over the course of the race. It could get a little deeper, as we have some snow falling on us right now. Saddle height, too. It’s just like riding a regular bike, only on snow.”

Degross also noted several kinds of fat bikes were in use for the event, no need to make them all exactly the same. He had multiple models from different brands, and some racers brought their own. “Various different manufacturers,” he said. “Most everybody in the bike industry now has some kind of fat bike to provide.”

Degross was excited to see the growth in participation at the triathlon in only its second year. On whether it would be better competitively if a team had specialists in each event, or might the solo athlete doing all three legs be at an advantage, he declared, “I’d go with athletics. If you’re really fit, or have a team of fit people, that’s a plus. It’s hard to say though – really, anybody could win.”

While standing around the fire pit awaiting the arrival of her team’s skier, Tracy Pihl said, as several riders did, she hadn’t been on a fat bike before.

“It’s my first time. As I understand it, the circuit is a series of zig-zags and going all around the ice rink three times, ending at the bonfire. I hope I don’t get lost,” Pihl said.

Could the zigging and zagging throw her off? Pihl responded with a grin and a wry, “Potentially. We’re ‘very serious’ about all this,” followed by a good laugh. She added the other two teammates would watch to make sure she stayed on course. And like a lot of teams, hers was shuffling personnel right up to the start.

“We had a great plan, at the beginning. We had a runner, and a good ski racer, then a good biker, then our runner got the flu, and the only bikes left were my size, and I’m the skier, so we’ve all switched places, pulled a new runner in as of about an hour ago, and we’re gonna do great!”

But if it was “just” for fun, there wouldn’t be any need to time it and all. So since everyone’s at least a little competitive while having a good time, the final results are below.

Donnelly officially said four women and four men raced individually (one-person teams) and there were eight other teams taking part, a total of 31 folks. She added one competitor was an Olympian (she didn’t identify him/her), the three judges competing were notable, and she said the oldest competitor was a woman of 67 who did the run and the ski while her teammate rode the bike. They were the only two-person team. That team competition was very tight, with less than a second separating 1st and 2nd place.

High school sports back up and running

High school sports have also ramped back up following the holiday break.

Basalt basketball saw its girls’ squad throttle 4A Battle Mountain on Jan. 8, 68-40. That was the biggest Longhorn girls’ winning margin since December 2016, and it put BHS above .500, with a 3-2 record, for the first time in nine years.

This week, on Jan. 14, however, neither Longhorn squad had what it took against conference foe Coal Ridge. The Titans hammered the Basalt girls 63-30, and the boys 84-48. The boys’ record is now 1-7 on the season, the girls even at 3-3.

The Longhorns travel to Delta for their next doubleheader Saturday, Jan. 18. Listen for live coverage on www.coloradosportsnetwork.com, beginning around 2:45 p.m.