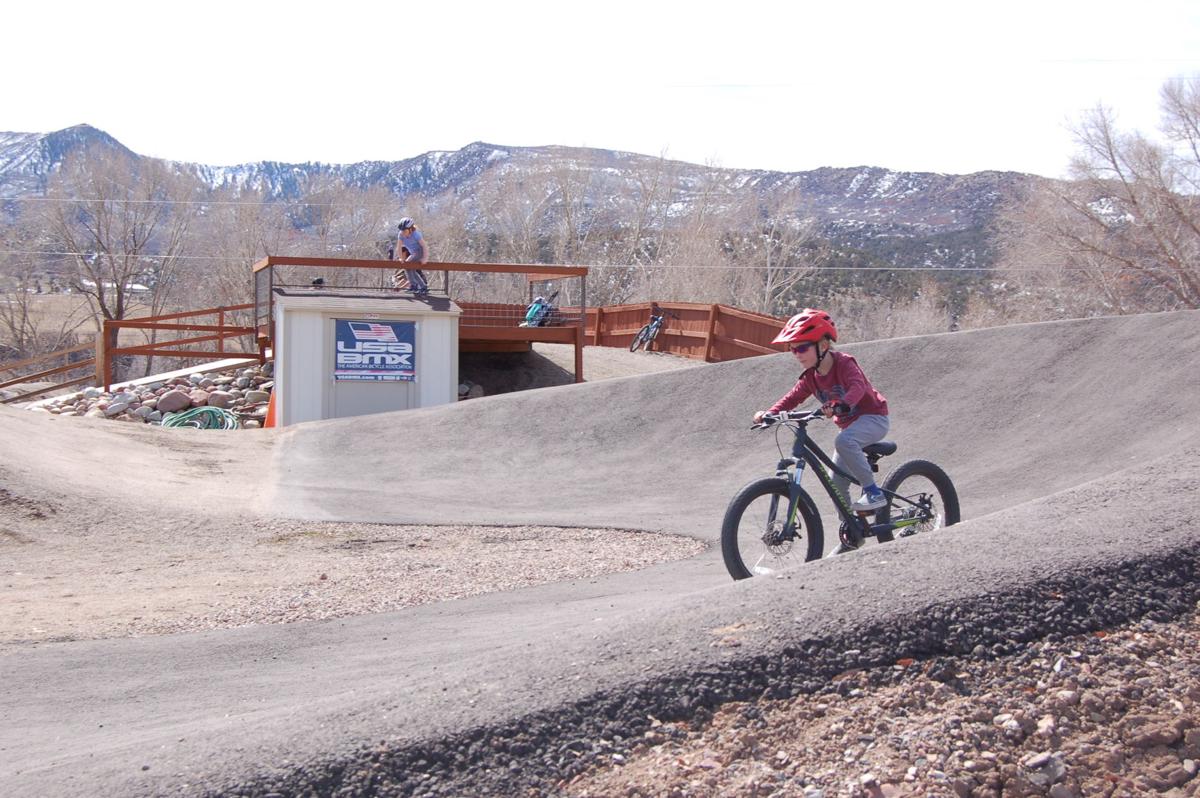 A young biker home from school took the opportunity to sharpen his BMX skills Monday at the Crown Mountain Bike Park. Crown Mountain Park and Aspen Valley Ski & Snowboard Club will be offering kids cycling clinics and camps at the park this summer. 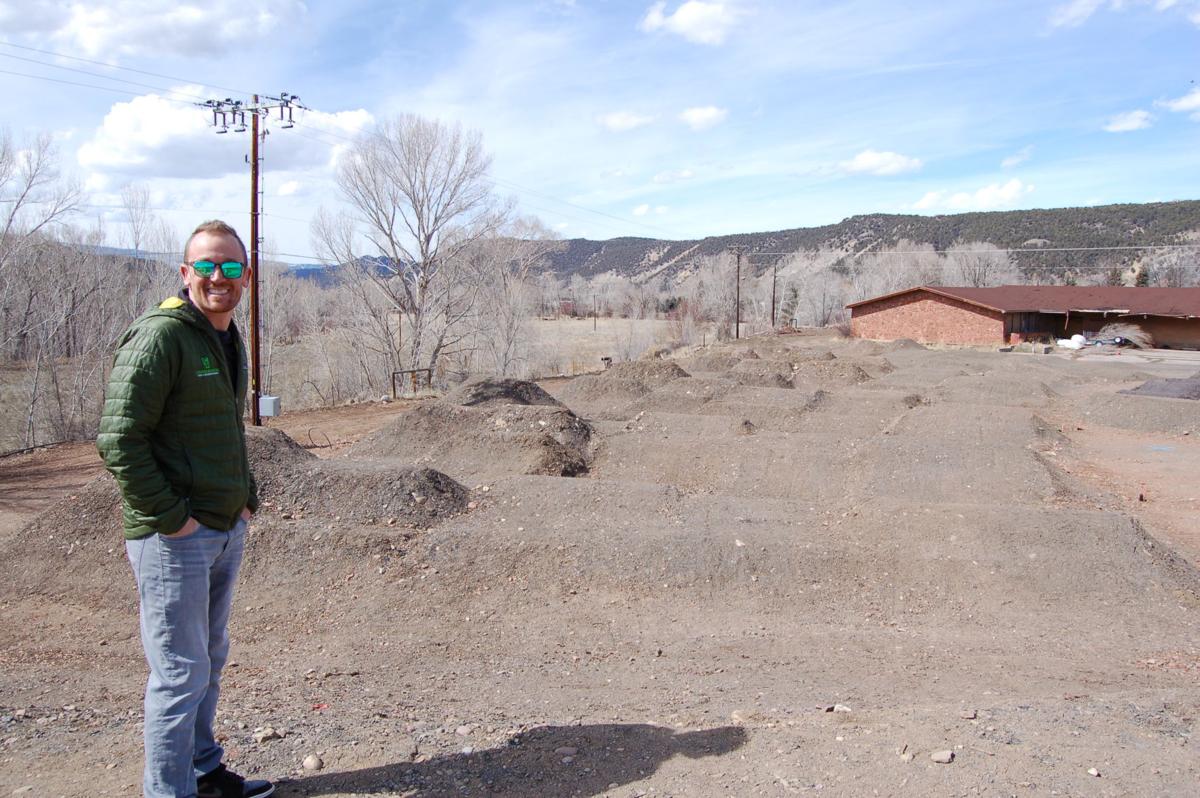 Nate Grinzinger, park and recreation manager for Crown Mountain Park, shows off the jump line under construction as part of the expansion of the Crown Mountain Bike Park. The new features will be largely funded by a $168,000 Great Outdoors Colorado grant awarded to the park last week.

Crown Mountain Park’s efforts to construct one of the state’s premiere bike parks got a sizable boost last week when it was announced that CMP was the recipient of a $168,091 Great Outdoors Colorado grant to “expand the existing BMX track … into a full bike park, complete with features for all ages and ability levels, including a beginner-to-expert dirt-jump progression track,” according to a GOCO press release.

The grant, one of 26 issued by GOCO in its latest grant round, was part of $5,232,115 from state lottery proceeds given out to community parks and outdoor recreation projects in Colorado. Total grant requests in the highly competitive process exceeded $17 million, more than three times what was available for the state agency to award.

The $168,091, combined with a $30,000 neighborhood partnership grant from Eagle County; sponsorships by Alpine Bank, Mid-Valley Metro, Colorado Trust Funds and First Bank; and in-kind sponsorships totaling about $140,000 from Glenwood Caverns, Heyl Construction, Clearwater Construction and Aspen Diggers, means that the park, which has evolved from a simple pump track over the last few years, is on schedule to open for use in June.

“We’ll have a ribbon cutting on June 17 if all goes well,” said Rebecca Wagner, CMP’s executive director. “We’re very excited to continue to impact the health of the community by providing these amenities. Yesterday (Sunday) I was at the park, and it was packed, and I realized how critical the park is in these times. Being able to have amenities like this for the people to use when there’s nothing else is huge.”

Currently home to a BMX race track, a small pump track and a course intended for very young riders on Strider bikes, the park will soon be adding the aforementioned dirt-jump progression track, a symmetrical asphalt pump track, a kids’ intro to singletrack, a cross country skills course with a variety of features and a bike jump landing airbag.

“We’re trying to really address the whole progression of biking with this park,” said Nate Grinzinger, CMP’s park and recreation manager. “We wanted to envision the Strider rider on our track and his full progression all the way up to when he’s a 17-year-old hitting our pro jumps and everything in between. We want to address every aspect of that rider’s progression.”

In addition to the rideable improvements being made to the park, the grant will also allow CMP to complete landscaping and irrigation and erect a 20-by-30-foot shade structure where kids or parents can take a break out of the sun.

“It’ll also be kind of a hot spot for events because we’re putting sound in,” said Grinzinger. “One of the things we wanted to address with the park is the aesthetic side of it. A lot of parks will put in a bike park and just walk away from it, so for us the programming coming in is huge, the shade, trees, landscaping, irrigation, electrical – we thought through all those things.”

The roughly one-mile cross-country trail, which will consist of 22 wooden features spread out across a “green” loop for beginners and a “blue” loop for more advanced riders, is being built by Glenwood Springs-based Big Mountain Events – “They do all the Red Bull biking special events,” according to Wagner – while the jump line and asphalt pump track were originally designed in conjunction with Arkansas-based Progressive Trail Design but have undergone some recent changes.

“We got different insights from different people,” said Wagner. “We went out to about 20 different bike parks (actually 26, according to Grinzinger), and we made modifications. It’s really exciting. It’ll get that end of the park looking like the rest of the park.”

The park expansion comes on the heels of the Roaring Fork Valley being designated the first International Mountain Bicycling Association gold-level ride center in Colorado in January, and Grinzinger expects that the revamped park will only improve the area’s IMBA score.

“When you talk about the whole Valley getting that designation, the addition of this park, being as diverse of an offering for biking as you’ll see anywhere, means that we’ve become an extremely premiere location for biking,” he said.

“This bike park expansion will strengthen the ride center’s gold-level scoring during future re-evaluations, while creating a place for our youngest generation to learn, train and benefit from multiple aspects of cycling culture in a safe environment,” added Roaring Fork Mountain Bike Association Director Mike Pritchard in a press release.

When the park opens for good this summer, CMP will be partnering with the Aspen Valley Ski & Snowboard Club to provide a wide range of affordable biking camps from June 8-Aug. 7. (For information or to sign up, visit teamavsc.org/mountainbiking.)

“Our bike park is setting the community up with the potential to develop the next big athletes in biking,” said Grinzinger.

“Nate, Jared McDermott, Heath Johnson and Paul Viola – these biking guys are taking this so passionately and coming up with great designs,” said Wagner, “and we’re also working with Brian Trujillo from BME. It’s pretty impressive. We’ve got guys who are volunteering to make this the best bike park in the state.”

The expansion also means that CMP will be hiring a seasonal bike park manager whose salary will be paid for by the revenue generated by the park, according to Wagner. That position is expected to be filled well in advance of the June 17 ribbon cutting.