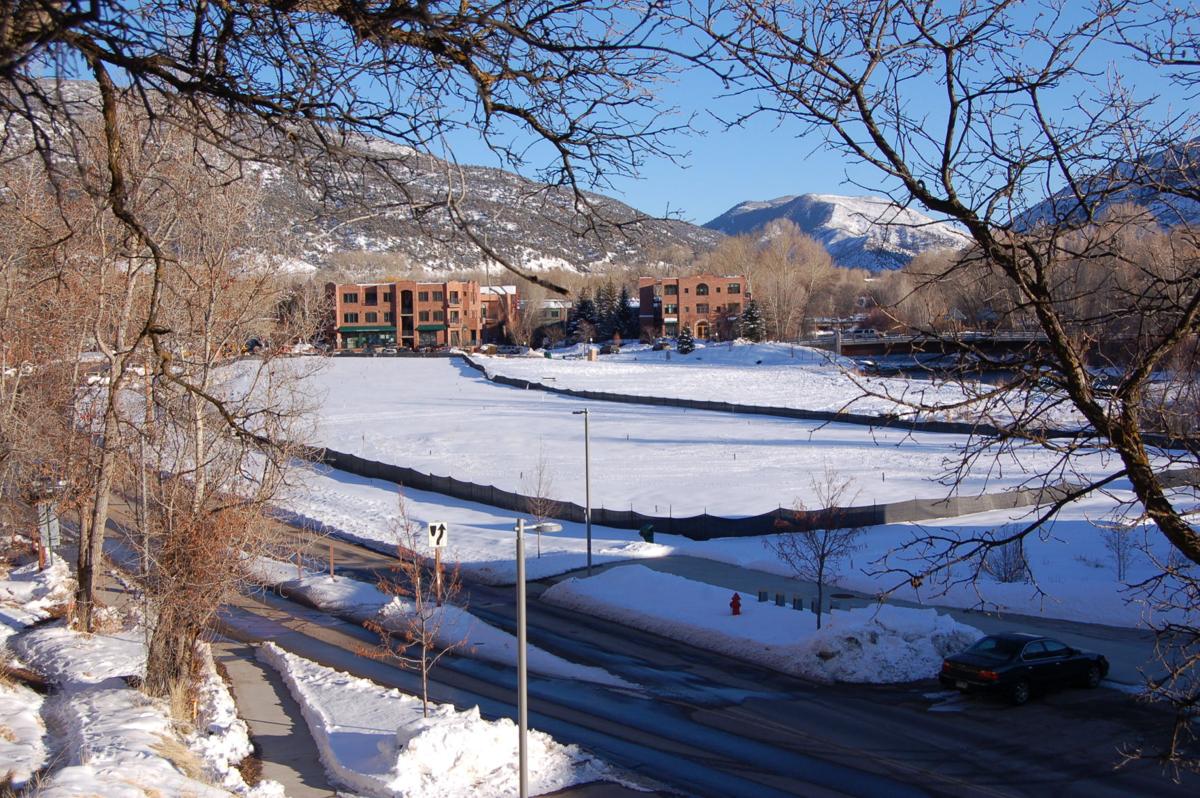 The western end of the Pan & Fork property would be the site for 11 townhomes between the Rocky Mountain Institute and the Makers Building. 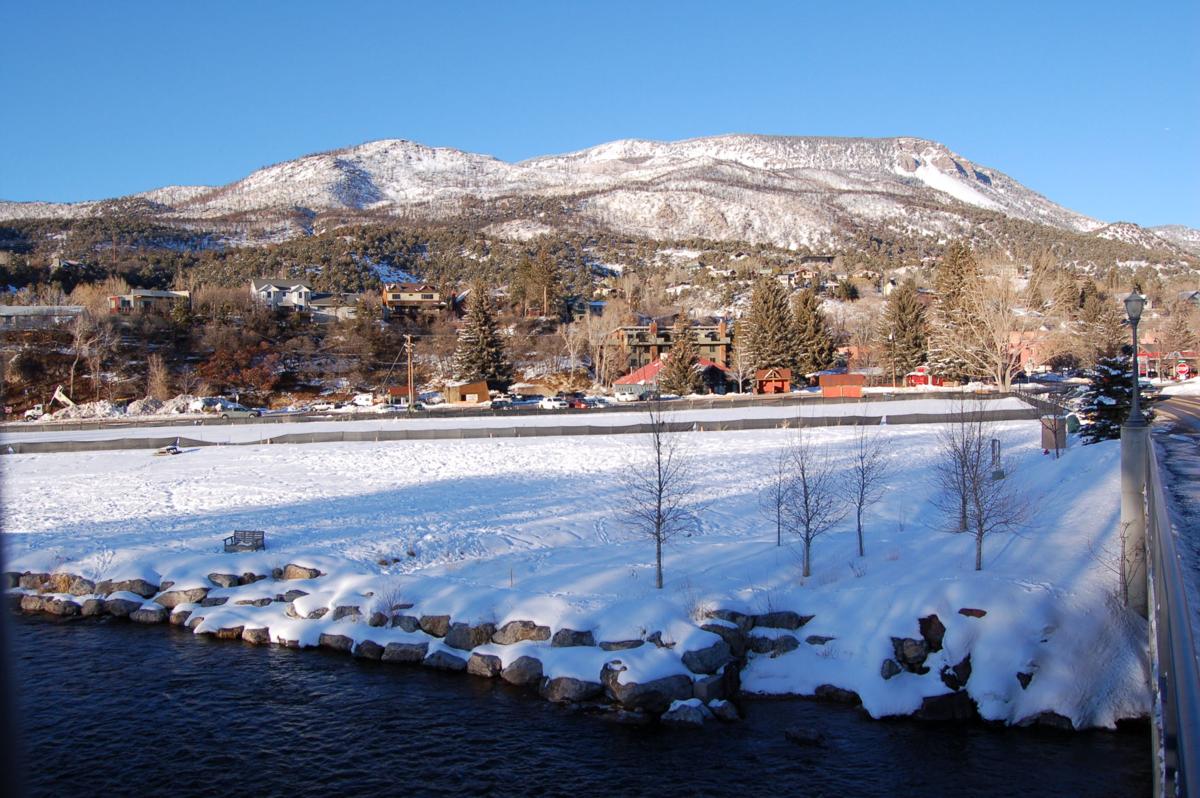 The eastern end of the Pan & Fork property would be purchased by the Town of Basalt to expand the Basalt River Park. 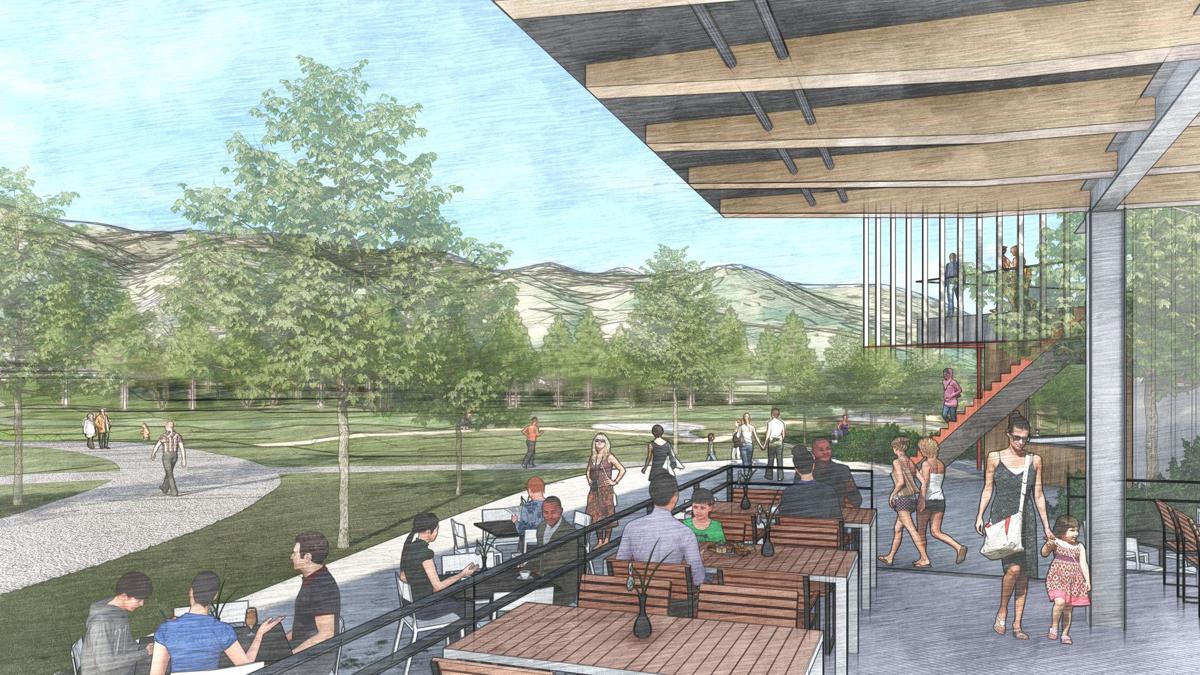 This rendering shows the view looking out from the proposed restaurant and patio across Basalt River Park.

After all the noise it made and wreckage it inflicted on Basalt over the last decade, it seems Hurricane Pan & Fork is dying with a whimper.

The much-discussed, overly contentious plan for the former mobile home park in the heart of downtown Basalt moved to within a step of becoming a reality Tuesday night when the Basalt Town Council voted 7-0 to approve the first readings of three ordinances necessary for the Basalt River Park development to move forward.

A second reading and public hearing are scheduled for Feb. 28.

Tim Belinski, who heads the development group, presented the proposal to the council Tuesday night and spoke about the process that went into the design, created by Basalt-based CCY Architects.

“This was handled as an opportunity and a commitment to really get things right,” he said. “There’s been a high degree of respect for the property and its potential. The role it can play is huge in terms of revitalizing downtown.”

The result, which Belinski called “the best possible design solution,” calls for the town to buy nearly an acre at the eastern side of the 2.3-acre property for $1.34 million, which will come out of a town fund earmarked for parks and open space.

The western portion of the property will have 11 townhomes and 13 other residences, four of which will be affordable and deed-restricted, along with 11,500 square feet of office space and a 3,000-square-foot restaurant with a patio overlooking the park. 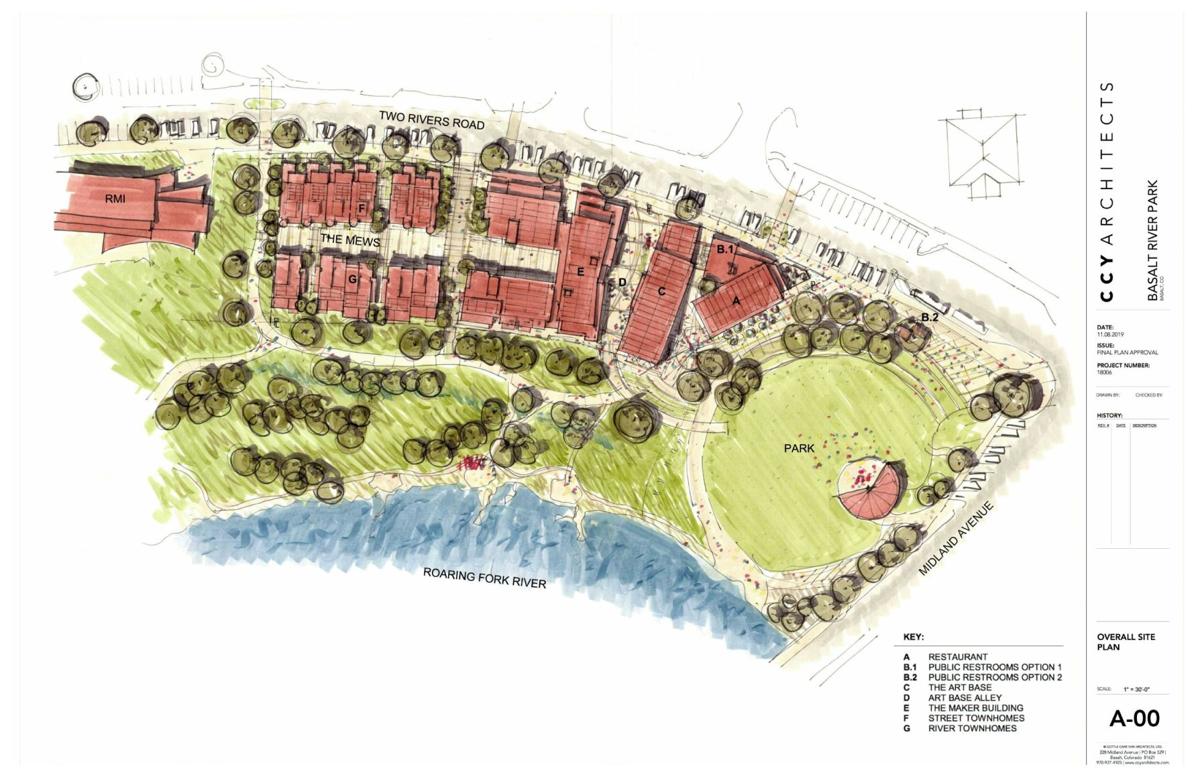 The Art Base, a local nonprofit currently sharing a town-owned building in Lions Park, will be moving into a new two-story, 6,000-square-foot home adjacent to the restaurant and across “ArtBase Alley” from a mixed-use structure being called the Maker Building. The Art Base intends to buy its own plot of land from Belinski’s group, with the town ready to buy it and resell it to the Art Base if necessary.

“Art brings people together,” said Genna Moe, the Art Base’s executive director. “I think having the Art Base as a cultural anchor of this park and development is a great opportunity for Basalt to celebrate community.”

Given the level of disagreement the property and the process of redeveloping it engendered in the community, it was somewhat surprising that the public hearing portion of Tuesday night’s meeting drew only three people.

First to speak was 30-year Basalt resident JD Black, the president of the Art Base’s board of trustees, who called the project “proof that the effort is worth it.”

“We’ve come up with a project that I think the entire town can be proud of,” he said, “and it’s a fantastic entrance to Basalt.”

Local professor, real estate broker and tireless volunteer Bennett Bramson said he believes the project “will truly grow the town in a sane, sound, sensible way,” and he thought it would “do beautiful things for our town.” That thought was echoed by the last member of the public to speak, local gallery owner Lynne Mace.

“I’m 74 years old, and if this thing doesn’t happen now, I just don’t know,” she quipped. “This is fabulous. This is what I’ve been waiting 10 years for.”

With no one speaking in opposition to the project, the discussion moved to the council, where the plan, which varied little from a sketch plan approved last May, received a mostly favorable response.

“Ever since the river master plan was done, this property has been the key piece of downtown, and we wanted to do it right,” said council member Gary Tennenbaum. “In the end, the reality for me was, ‘Is this the perfect development that I wanted all along?’ I don’t know because I really couldn’t ever come up with one because the community has been very split over what should happen here.”

Council members Katie Schwoerer and Auden Schendler had some objections to the number of affordable residences, with Schwoerer calling the four units an “affront” to the numerous local families who called the property home when it was a mobile home park. Schendler said he wished all the units in the development were affordable, but ultimately both voted with their fellow council members and Mayor Jacque Whitsitt to pass the ordinances onto a second reading and public hearing.

The first ordinance amends the town’s municipal code to make the property a Community Serving Commercial Zone District, which allows mixed-use development. The second ordinance was the final Plan Application and Associated Land Use Actions from Belinski’s group and CCY.

The third ordinance allows the town to purchase land from Belinski’s group to expand the Basalt River Park. The design for the park, done by CTA Architects Engineers and Basalt-based Connect One Design, is also in the final stages of approval.

With much love and little resistance shown to the ordinances at their first readings, it will be interesting to see if any last-ditch effort to derail the project is made at the public hearing on Feb. 28 by the contingency of locals who once maintained the entire property should be a park.

If not, and should the council vote in favor of the ordinances once again, construction on the park and phase one of the development could begin as soon as this spring.