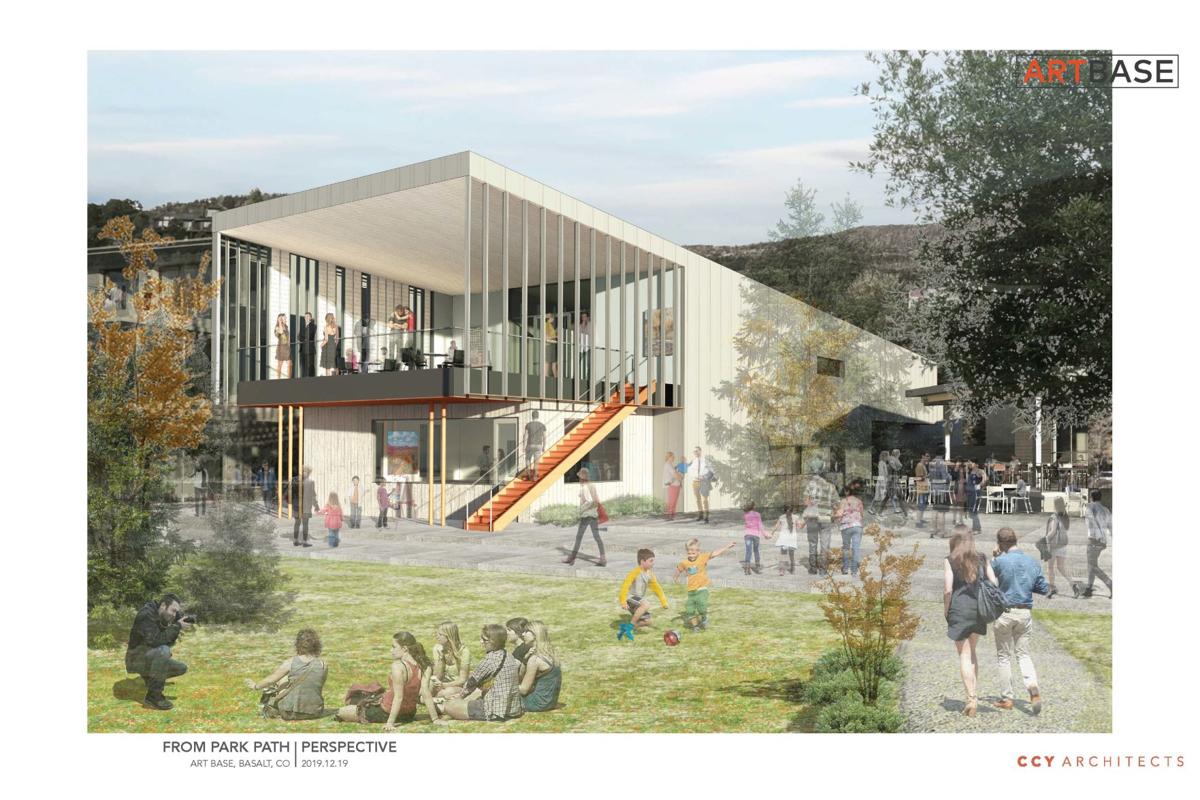 A new nonprofit Art Base is envisioned next to the restaurant to serve both children and adults. 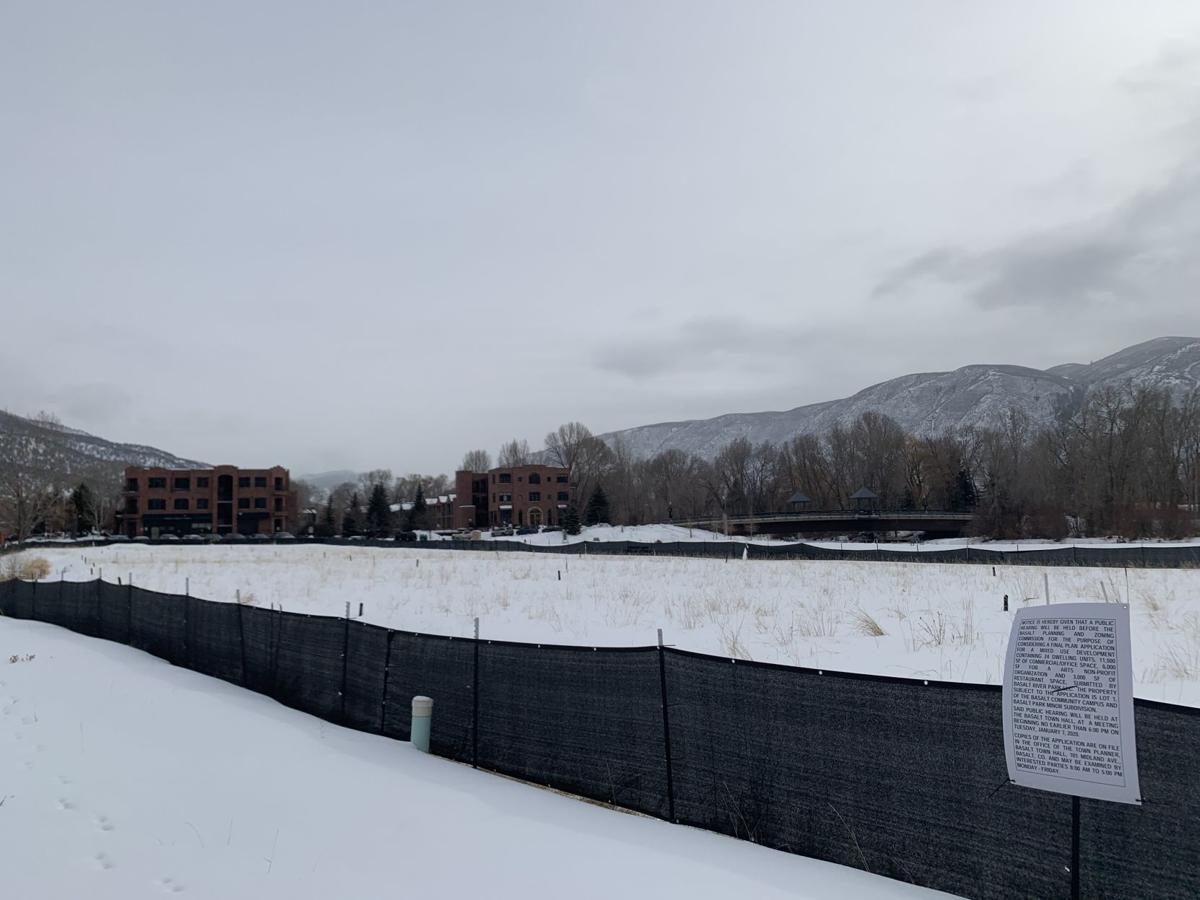 The 2.3-acre Pan and Fork property located along the Roaring Fork River adjacent to downtown Basalt. This week, the Basalt Planning and Zoning Commission unanimously approved the second reading of Basalt River Park LLC’s concept for this prime parcel. 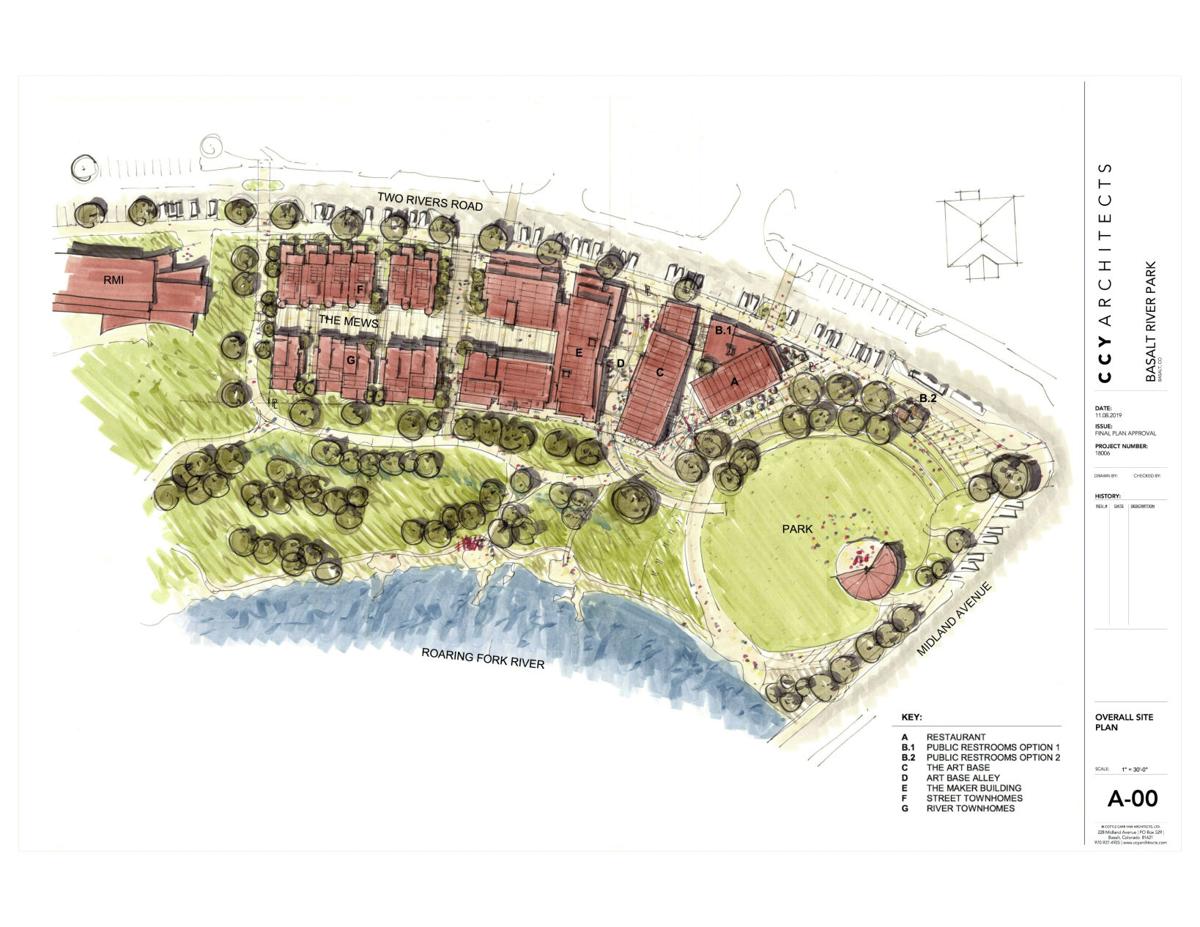 The site plan for the former Pan and Fork property.

By a vote of 7-0, the Basalt Planning and Zoning Commission this week unanimously approved the second reading of Basalt River Park LLC’s ideas for a new neighborhood along the Roaring Fork River where the old Pan and Fork trailer park lived for decades.

Planning commissioner Bernie Grauer, a former Basalt town councilman, summed up what the Basalt community will net with this approval: “The town is getting a properly scaled combination of residences, offices, nonprofit space and a restaurant.”

Grauer noted that the present application does not give either those who wanted the area to be 100 percent park or those that wanted it to be a “wall of condominiums or a condominium hotel.”

The other P&Z commissioners were similarly approving of the project’s elements. In commissioner Gino Rossetti’s opinion, the project will be well received by the community as it moves through Basalt Town Council in February.

The latest Pan and Fork design for the 2.3-acre vacant land along the Roaring Fork River adjacent to downtown Basalt was in process for a couple of years through a couple of different developers.

Tim Belinski and his team with Basalt River Park LLC have been solidly working on the project for over a year.

“The goals were easy and straightforward for this project because they were already created with a lot of community involvement and professional guidance,” explained Belinski. “Vitality, bringing people to this area, was the main reason.

“The focus was on having people be there on that land year-round. Bring people there comfortably to socialize, to play, and to be part of an arts-minded scene. In the end, we ended up with a great collaborative design.”

Looking at the vacant land from Two Rivers Road, the far left side of the property has been raised out of the floodplain and will be a new one-acre addition to the existing park that runs along the river with new picnic areas and a boat launch. Play features for kids include a mister and a steamer, while new features for adults include bike racks, public restrooms and a bandstand and stage for concerts and events.

“The emphasis is on line of sight,” Belinski explained. “You don't want to obstruct the river so the features have gone through a design process like the stage for music and the play areas. There is a shell around the stage but no large berms.”

Moving west across the land, a new restaurant with a large patio is envisioned next to the park.

“It is a fabulous location. The restaurant needs to have a local touch that caters to the people who are in the park and enjoying the park and the river,” noted Belinski.

“The menu allows them to come back repeatedly, but the restaurant also needs to draw tourists and people from Aspen, and give them a reason to make the trek Downvalley,” he added.

A new, nonprofit 6,000-square-foot Art Base is envisioned next to the restaurant to serve both children and adults, according to Genna Moe, the director of Art Base.

Moe outlined for the planning commissioners her thoughts on how the site would come alive while they raise funding for the building by having temporary art displays on the vacant land.

Speaking with Belinski, he pointed out how the new Art Base will purchase the land for a below-market rate, at the same price the Town of Basalt will pay for their new park land.

“We feel comfortable they (the town) will buy it,” Belinski said. “They have carved that amount out in their present budget, and they have available to them a sales tax component that is part of their Parks, Open Spaces and Trails.”

To enhance people’s connection to the Roaring Fork River, the project plans to have sight lines between most of the buildings so that someone can stand on Two Rivers Road after construction is complete and still see and be connected to the river.

In addition to a new Art Base, Belinski and his team have planned for new offices that will be available for rent to nonprofit organizations and others. Belinski noted that 12 percent of the office space is earmarked at below-market rents for nonprofit groups in hopes of building on Basalt’s already existing home for nonprofits adjacent to the new Pan and Fork project like RMI, the Roaring Fork River Conservancy and the Aspen Community Foundation.

During the process of the public meetings, the project’s design evolved and the new commercial spaces now face the river and park.

The engine to pay for the new Pan and Fork project is the new residential neighborhood that will be created on the far west side of the Pan and Fork land next to RMI.

Twenty-four new residences have been designed to enhance vitality next to downtown Basalt. Eleven new townhomes are planned for the site, with sizes ranging from 1,900 to 2,100 square feet. Six of the new units will face Two Rivers Road, while five will face the river.

Belinski said he believes that the new townhomes and an additional three new condos will draw residents and visitors to Basalt to live and play.

Six micro-units that house 425 square feet studios are also planned as part of the new residential plan, along with four two- and three-bedroom affordable housing units.

All parking for the new residential will be off-street, surface-grade parking within the project. Forty additional spaces on both sides of Two Rivers Road are planned to assist the commercial spaces and night events at the new Art Base.

“The balance in creating this project was important,” Belinski noted. “The area is the urban core of Basalt and to have overbuilt the park in the urban core could have deluded the downtown vibrancy. This design enhances vibrancy because it has a restaurant and commercial spaces to bring people there.”

Belinski and his team are planning on a three-year phased construction of the project, beginning with the new residential units on the west side of the land. It comes before the Basalt Town Council in February for at least two meetings, and Belinski said he hopes to break ground later in 2020.