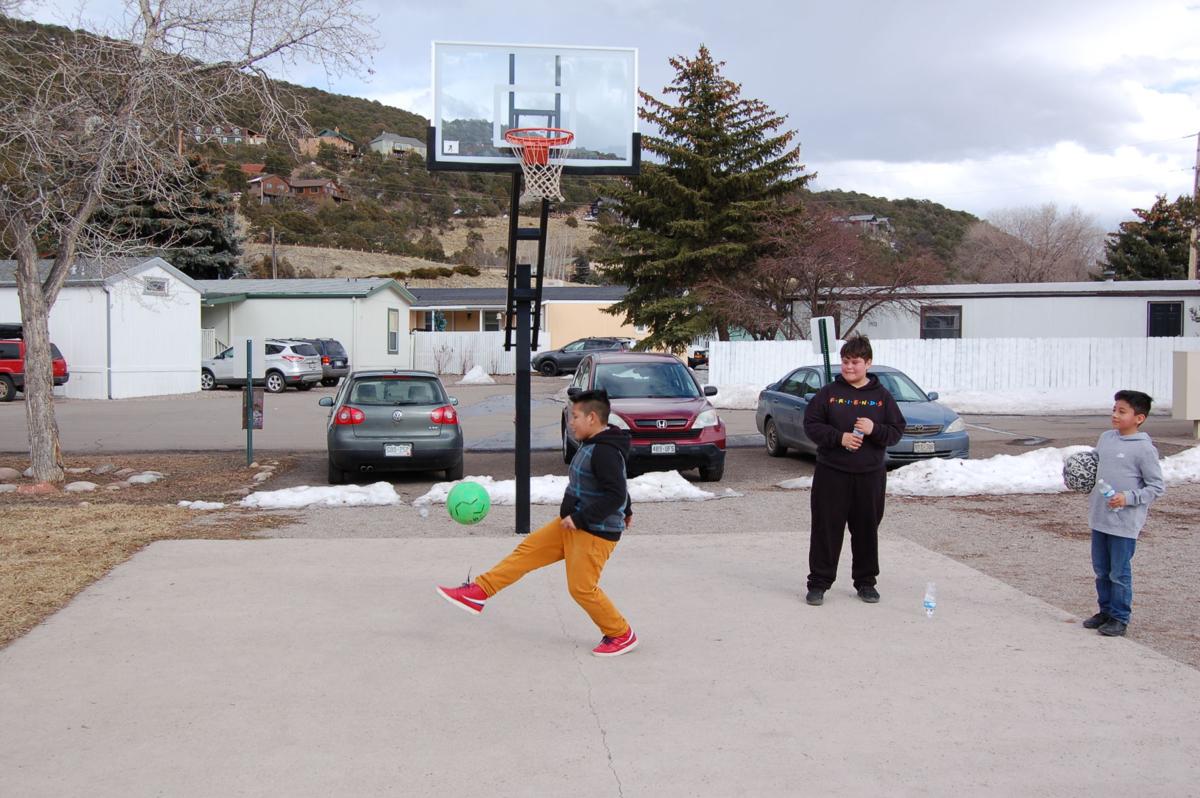 Kids show off their soccer skills recently at the playground of the Aspen Basalt Mobile Home Park. 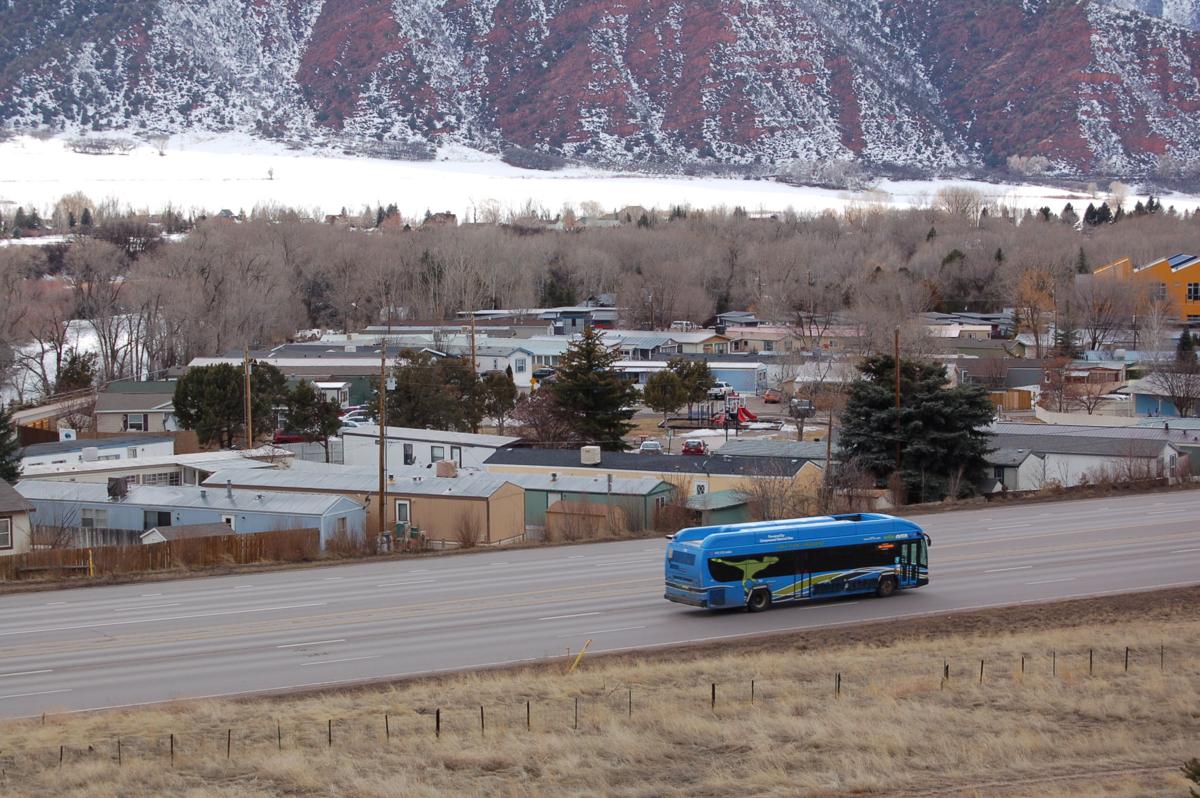 Despite being surrounded by land within the Basalt town limits, the Aspen Basalt Mobile Home Park lies in unincorporated Eagle County and is technically not a part of Basalt.

It’s a random Sunday at the Aspen Basalt Mobile Home Park along Willits Lane, and as is usually the case, a few kids are out at the playground, kicking soccer balls around and shooting hoops. In a nearby yard, three younger kids shriek with delight as they bounce on a trampoline, and a few well-kept homes away, a neighbor helps his friend with a roofing project.

It’s the kind of family-friendly vitality Basalt – and just about every other municipality – always says it wants more of, but there’s just one problem: Despite being virtually surrounded by land within the town limits, the Aspen Basalt Mobile Home Park is not part of Basalt. It resides, instead, within unincorporated Eagle County.

It’s the same situation at Homestead Park, adjacent to Basalt’s coveted Old Town neighborhood, and at the Roaring Fork Mobile Home Park, which sits just across its namesake river from downtown Basalt and lies partly in Eagle County and partly in Pitkin County, despite also being surrounded by the town limits. Meanwhile, just a couple of miles to the west, those same town limits define a flagpole that incorporates City Market and the trendy Willits neighborhood but excludes El Jebel and Sopris Village on either side.

The three mobile home parks, El Jebel and Sopris Village all feed into the town’s school system, and all are clearly part of what anyone would rightly consider Basalt, so it makes little sense for the citizens therein to not get to vote on local issues like the current mayoral and town council races, but that’s the way things stand right now.

All five neighborhoods also have another thing in common: Their residents are largely Latino. That’s how Basalt, which has an official demographic makeup of 86 percent Anglo, can have a school system with a student population that is roughly 50 percent Latino.

That discrepancy has fueled allegations that the exclusion of the neighborhoods from town is racist in origin. Others think that there are financial reasons behind it, as mobile homes don’t really contribute much in property tax, and still others correctly point out that it’s up to the landowners to request annexation into the town, so there’s not much Basalt can do about the situation anyway.

Whatever the genesis of the exclusion, it contributes to a problem that is amply illustrated by the upcoming election. The three candidates for mayor are all white men. The six candidates for town council – three men and three women – are also all white. As is almost always the case, there are no Latino candidates. With most of the local Latino population ineligible to run for office or join certain commissions and boards, it will be another cycle, at least, with a notable dearth of representation for half of the area’s population.

So where does Latino leadership come from in this part of the Valley? What is being done to rectify an issue that locals of all ethnic makeups agree is a problem? And how do Latinos make their voices heard in the meantime?

“First they need to speak up,” said Adriana Torres Cabrera, a preschool teacher at Basalt Elementary School and resident of the Aspen Basalt Mobile Home Park, “and, secondly, they need the support of someone who is strong in the community. If they don’t have anyone, they won’t speak up. They need to feel confident that someone is there with them.”

Ask around in the Mid-Valley about Latino leadership, and Torres Cabrera’s name is sure to come up. A resident of the former Pan and Fork Mobile Home Park in downtown Basalt, she found herself thrust into a bit of an advocacy position a few years ago when she worked with the town to help resettle the Pan and Fork’s evicted residents and make sure they got the cash settlements they were promised from the town.

Since then, she’s been involved with organizations like English in Action, which pairs non-English-speaking adults with volunteer tutors, she’s working toward a degree at Colorado Mountain College, and she’s achieved a rather interesting title.

“Stu, one of the old police officers, used to call me the Latina mayor,” said Torres Cabrera.

For now, living in unincorporated Eagle County, her mayoral mantle is strictly honorary, but Torres Cabrera hopes to be moving into a unit at the Basalt Vista housing development behind Basalt High School on May 1.

“I’m hoping to sell the trailer I’ve been living in for the last four years,” she said. “If I sell this one I can go there, but if not, I can’t. I’m on the line that I could lose my space over there.”

Should she be able to make the move, it will bring Torres Cabrera back into the Basalt town limits, but when the issue of her running for, say, town council was broached, she laughed and demurred.

“I need to learn more English,” she said. (She doesn’t. Her English is very good.)

Still, she loves the idea of a Latino holding an elected position in the town hierarchy, and she has a daughter – the first one in her family to go college right out of high school – who came through a program that could help alleviate the Latino leadership gap.

“We’re what they call a first-generation college-access preparation program; that’s the fancy title,” said David Smith, executive director of Roaring Fork Precollegiate, which is run through the Roaring Fork School District. “What we’re trying to do is get kids who are the first in their family to go to college and get them through both middle and high schools and successfully transitioned into some sort of post-secondary education of their choosing.”

With a curriculum that can be daunting to someone with no family history of higher education, the program necessarily calls on participants to blaze metaphorical trails.

“Leadership is a huge part of both our curriculum and our mindset,” said Smith. “We tell the kids, ‘Just by being a first-generation college student, you are, by definition, a leader. You’re going to be the first in your family to do something that no one else has done before. That implies leadership whether you like it or not.’”

To date, the Precollegiate program has been a big success and has produced enough alumni that Smith and his cohorts have been able to see the effect of the program after the kids graduate from college. One of the effects they’ve seen, he claimed, is that those alumni who return to the Valley consistently try to take the opportunity they’ve been given and pay it forward.

It bodes well for the future of Latino leadership in the valley, but that’s yet to come. For now, the lack of leadership and representation is still being felt, and Smith, for one, isn’t exactly sure what can be done about it in the short term.

“We kind of look at this leadership idea as almost a generational problem that needs to be addressed,” he said. “It’s going to be those individuals coming back and speaking up, getting involved and feeling like they’re empowered to do so.”

At the same time, the Latina mayor thinks that the town can do more to acknowledge that, even though most Latinos don’t technically live in Basalt, they are a vital part of the town’s fabric and should be taken into account in all deliberations.

“They can recognize our voice, that we are here, that we exist,” said Torres Cabrera before getting to the heart of what it means to be Latino in this valley, “and we are the main support for the jobs they don’t want to do.”