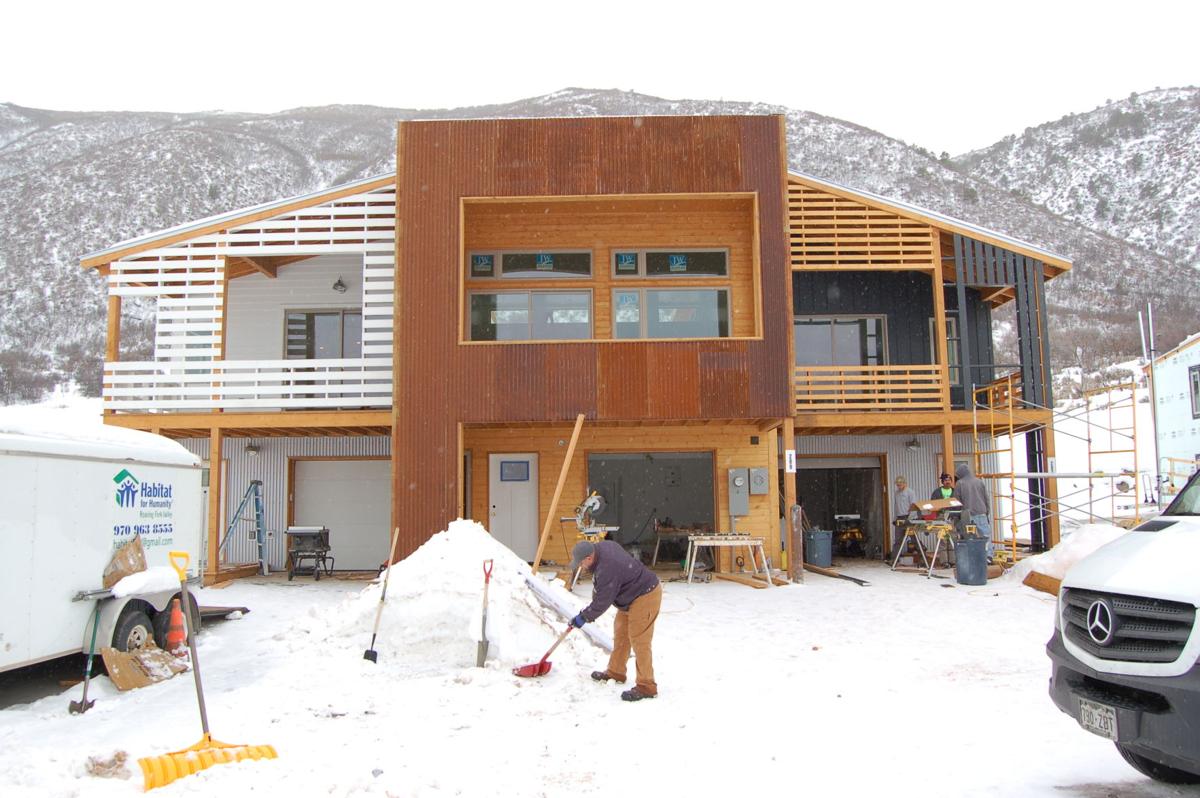 Set to open in February, this triplex at Basalt Vista will soon welcome three new families to the growing neighborhood. 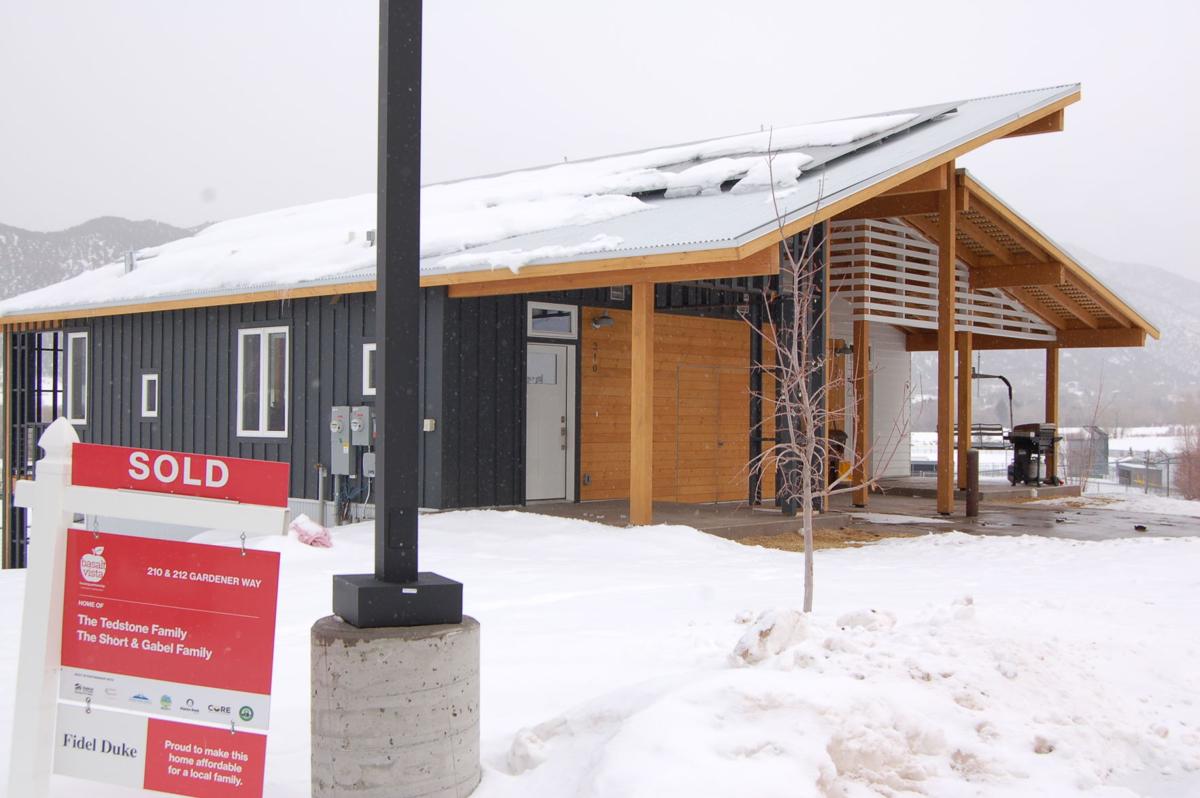 Opened last fall, this duplex lot holds two of the four completed homes at Basalt Vista. Twelve units are set to be completed by this spring. 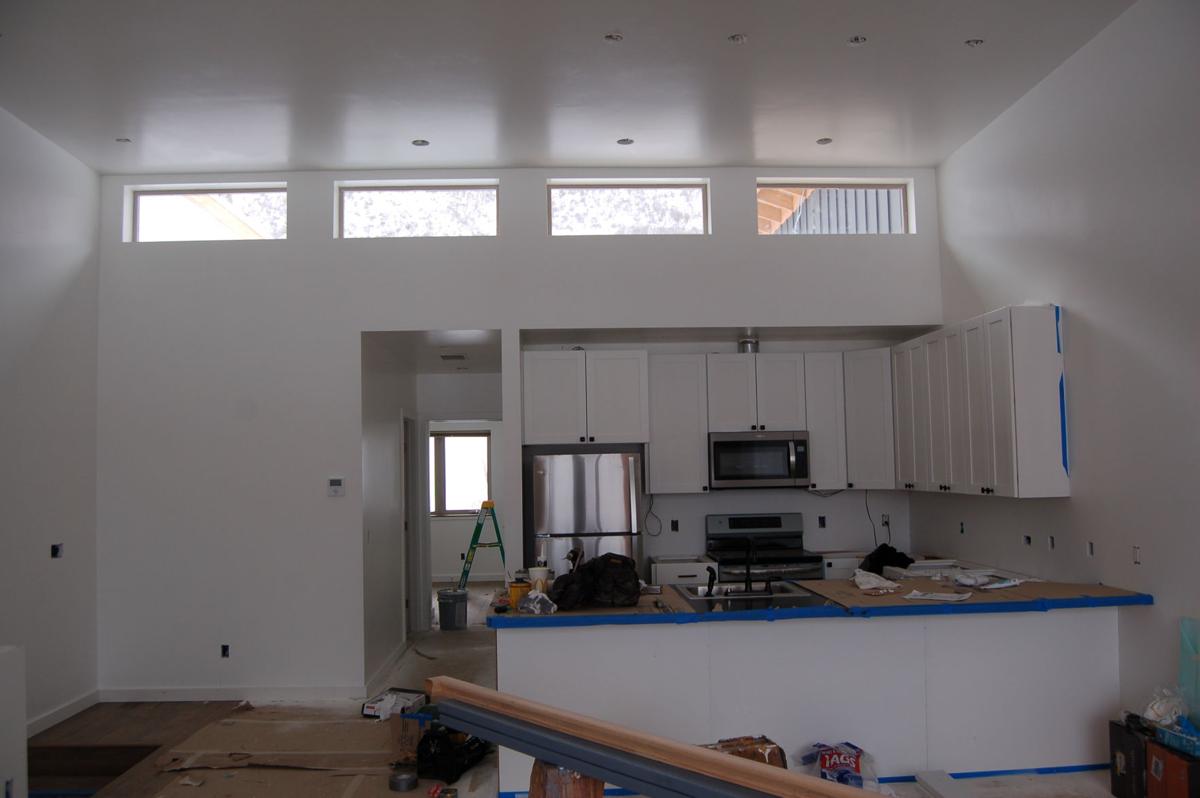 The family room/kitchen of the middle unit of a triplex soon to open at Basalt Vista uses clerestory windows to fill the home with natural light.

Basalt’s newest, greenest and smallest neighborhood is set to expand significantly, relatively speaking, next month when the Basalt Vista development behind Basalt High School opens its doors to three new families, bringing the affordable housing project’s total number of families to seven – while keeping the neighborhood’s carbon emissions at zero.

The 27-unit, net-zero development, which is being spearheaded by Habitat for Humanity Roaring Fork Valley, includes 14 homes for teachers in the Roaring Fork School District and 13 for Pitkin County workers through the Aspen Pitkin County Housing Authority. And while it will never be the biggest neighborhood, Basalt Vista more than makes up for it in community spirit.

“It’s people that know they want to stay here, and they’re happy about it,” said Ana Quiceno, a kindergarten teacher at Basalt Elementary School who moved into her two-bedroom unit in September. “They feel thankful about the opportunity, so it’s people who come with a great attitude.”

“I’m already, in my mind, planning out what summertime is going to be like,” said Natasha Davis, a teacher in the toddler room at Basalt Preschool who was among the first to move into Basalt Vista back in June. “We’re going to have barbecues, and we’re going to hang out. I’m really excited to see this place get so much life in it.”

It’s a close-knit community feeling that comes, in part, from the fact that the new homeowners are required to contribute 250 hours of sweat equity to the project before taking ownership. They can get the community to take on 100 of those hours, but 150 still have to come in the form of old-fashioned elbow grease, no matter what good excuses they may have for not pitching in.

“My last day working at the job site was on a Friday, and I gave birth the following Tuesday,” said Heather Short, who moved into a unit with her husband, Keith Gabel, at the end of August and worked for months on the project while pregnant.

Short, a gymnastics coach at the Red Brick Center in Aspen who also works at the Treehouse kids facility in Snowmass, and Gabel, a professional snowboarder and coach and member of the U.S. Paralympic Team, won their unit through an APCHA lottery and are very upfront about how it has changed their lives. They had previously been in an APCHA unit they sublet in Burlingame from an owner who was on sabbatical, but their maximum allowable time was almost up, and they were concerned they might have to leave the Valley to find a home they could afford.

“We were just blown away at the prices in the Valley for very little to almost nothing,” said Gabel. “We started considering going elsewhere to live for the simple fact that we didn’t know if we could afford it anymore. It was kind of a heartbreaker that everywhere we looked was well outside our price range.”

Just before they had to move out of Burlingame, Short and Gabel accrued enough time in the Valley to qualify for the APCHA lotteries and started putting their names in the hat, hoping to win something. When they heard about Basalt Vista, however, they really got interested.

“When Heather explained the net-zero idea and the eco-friendly aspect of it to me, I was like, ‘Wow, that sounds cool. That sounds like something I want to be a part of,’” said Gabel. “We’re all about trying to do our part to help the environment, and this couldn’t be a better way to do that.”

So how did they react when they learned they’d won?

“We were absolutely blown away,” said Gabel. “I was in a meeting at the Aspen Valley Ski and Snowboard Club going over some options for the season, and Heather practically kicked in the door in tears. I thought something was wrong at first. She just kept saying, ‘We won,’ and I was like, ‘What did we win?’ And then I realized what she was talking about. They were tears of joy. We were ecstatic.”

That sense of joy and relief was echoed by Short and Gabel’s neighbors, who used terms like “miracle” and “dream come true” to describe their own good fortune at securing one of the units.

“(Being unable to afford housing) is a fear that is perceived in the environment,” said Quiceno, who was a teacher in Colombia before immigrating to the U.S. seven years ago and moving to the Valley three years ago. “It’s a thing that many teachers talk about in school, especially those teachers who are renting right now. As a new person in the Valley I was always looking for ways to stay. I love it here. I love my job, so the fact that I could afford a house was like a miracle for me.”

“I would have been in a tough situation (without Basalt Vista),” said Davis, who had been living in Ironbridge near Glenwood Springs but faced the specter of having to move out. “This absolutely is the reason I’m able to still be in this Valley, still be a teacher and do what I love and be able to co-parent my daughter.”

The fourth family in the neighborhood – and the first to move in back in June – is actually made up of two Basalt Elementary School teachers, Jair Bravo, who teaches third grade, and Katela Moran, a second-grade teacher, and their son Juan Marco, a student at Basalt Middle School.

“The first thing they did after moving in was put a really nice sign out in front of their house saying thanks to everybody, and then a few weeks later they went out and got a kitten that they named Tesla in honor of the fact that the home was net-zero,” said Scott Gilbert, the president of Habitat for Humanity Roaring Fork Valley. “And I found out they went and got a puppy about a week ago. I was hoping they were going to name it Kilowatt, but they named it Neo, which I guess is a Spanish term for ‘new.’”

It’s an apt moniker for a pup in Basalt’s newest neighborhood, and while the newness of it means that Bravo, Moran and their neighbors have had to endure constant ongoing construction since moving in, none of them is complaining. In fact, they all claim that it’s no big deal and that getting to help alongside professional builders they described as “patient” and “understanding” has helped bring the burgeoning community even closer together.

“It’s kind of cool because we got to help build a little bit of the other structures,” said Gabel, “so we got to watch those structures literally come from the ground up. To see the progress and the amount of attention to detail, quality and craftsmanship that goes into these places, we’re extremely excited for our new neighbors to have the opportunity to move in.”

They’ll be gaining those new neighbors in February, when the triplex Gabel and others helped work on gets ready for occupancy and welcomes three families who will be just as excited about their opportunity to stay in the Valley and do their part to get the next units, which should be done in May, ready for the next additions to the neighborhood.

“I was just starting to help build my home the first week of January last year, and I was out there in 8 to 12 degree weather,” said Davis. “To come full circle and be in my home and see all these other families getting the chance to move in is just the greatest feeling ever.”