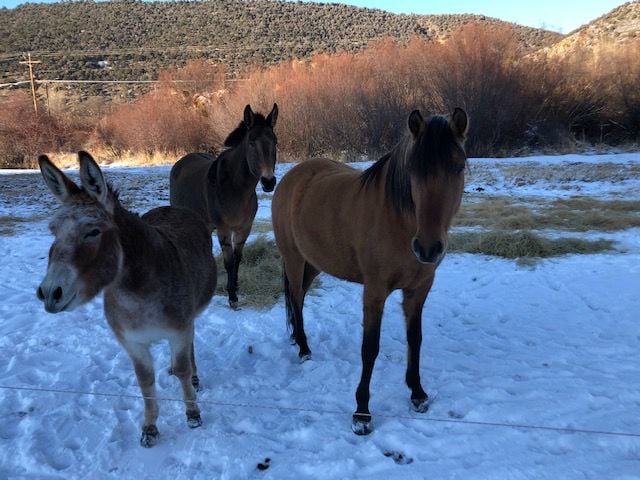 Four-legged family members Lucky, Zebediah and Honey. Some of the many advantages attributed to mules include increased strength and endurance, disease resistance and feed efficiency. 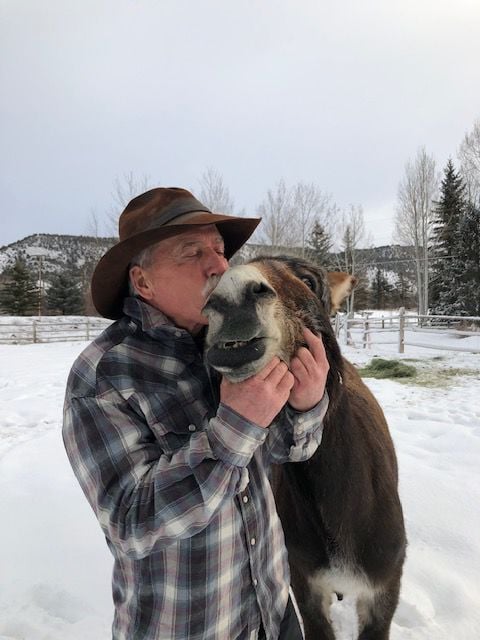 "In the Mexican culture, probably because equines are still commonly used in rural areas, equines are always referred to by sex. There are no generic terms for horses, mules or burros that group the sexes together."

Those who don't know the difference between a burro and a burrow don’t know their ass from a hole in the ground.

My level of expertise is further bolstered by the fact that the etymology of cowboy colloquialisms is hardly an exact science, providing lots of room for discretion (i.e. bullshit). Most references come word of mouth from “old timers” who are mostly dead and unable to repudiate. It is with these qualifications, along with the fact that nobody else really cares about this topic, that I offer the best dissertation on equine nomenclature that you’re ever apt to receive.

There are horses, Equus caballus, and asses, Equus asinus, two different species in the same genus. They are closely enough related to be able to hybridize and produce offspring, the mule, or the hinny, depending on the sex of the parents. Mules are the result of a jack (intact male) ass bred to a mare. Mules are known as mollys (female) and johns (castrated male), although to old timers the term mule implied castrated male.

There is no term for uncastrated mules because there’s no reason to keep testicles on a sterile hybrid only to elevate testosterone to levels that cause males of all species to act like jack-asses. Mules tend to be heavier boned and stronger than hinnies and are considered the superior of the two hybrids for draft work. They are often cited in genetics textbooks as a prime example of heterosis, or hybrid vigor, resulting from genetic diversity. Unlike mares, mollys are generally preferred for work and riding.

When a stallion is bred to a jenny (technically “jennet” but always “jenny” to cowboys) ass, the resulting offspring is known as a hinny, a name derived from the higher pitched combination bray (ass vocalization)/whinny (horse vocalization) compared to the generally more guttural call of the mule. Although genetically identical to their reciprocal cross, hinnies differ due to maternal effects of the mare’s womb compared to that of the jenny.

Born of the jenny, they are generally smaller than mules but otherwise tend to be more horse-like in their features, although more variable in all characteristics and difficult to absolutely distinguish from mules without knowing their ancestry. Male and female hinnies are known as buds and blossoms respectively.

OK, I admit, I just flat-assed made up those last two names. But this seems justified to fill a void. There is so little said of these rarely encountered hybrids that I doubt there have ever been widely established names for the sexes. In the unlikely event that anyone ever refers to a hinny by sex, they will generally fall back on either horse or ass terminology, unjustly diminishing the importance of hinny sexual identity.

Considering the growing emphasis on gender distinction, imagine being born a sterile, half-assed, reciprocal hybrid without even clear species identification and you might understand the importance I place on hinny gender definition. For this reason and for the sake of completion of equine nomenclature and to close an obvious and glaring gap in defined reality, I take the liberty of assigning hinny gender identity. Having spent more than half of my life with a female hinny named Fart Blossom, I dedicate that name to the female hinny and the logical counterpart, bud, to the male.

Back to asses there are jacks, the males, and jennys, the females. “Burro” is a generic term  for asses but mostly applied to the smaller, Mexican/Central American variety. The term “donkey,” according to old timers, referred to a castrated jack.

It is noteworthy that in the Mexican culture, probably because equines are still commonly used in rural areas, equines are always referred to by sex. There are no generic terms for horses, mules or burros that group the sexes together. Caballo refers to geldings, yegua refers to mares and semental refers to stallions. A male mule is a macho and female a mula. Burro is male and burra female. Hinnies are referred to as buds and blossums (we need to establish this internationally).

Mules and hinnies are generally sterile although there have been many documented exceptions. One well documented case was a molly that gave birth to several foals, both mule and horse foals, recorded and studied at Texas A&M in the late 1950s. The only resulting conclusion was that “them Aggies didn’t know a jack-ass when they had one” (i.e. see ass from hole in ground).

A recent and well known case was a molly that gave birth to a mule named “Blue Moon.” Blue Moon was exhibited at the Western National Stock Show for several years. There have been about 50 cases of fertile mules and hinnies over the past couple hundred years.

Some of the many advantages attributed to mules include increased strength and endurance, disease resistance and feed efficiency. They also have better survival instincts and are far less likely to do something to endanger themselves, like spooking off a cliff, and are therefore safer in many situations. This is why only mules are allowed in the Grand Canyon.

Some of these traits result from hybrid vigor but some likely come directly from the ass half. Asses are not only smarter, but have not been nearly as screwed up through selective breeding as horses have. Modern day asses look very much like their wild type ancestors still roaming Africa. Selection for calm disposition and submission has bred survival instincts out of horses to help them accept training that often goes against instinct. The reason asses and mules are reputed to be stubborn is because they are not so willing to compromise their own survival instincts.

They are not so much obstinate as opinionated. Contrary to popular belief, asses are very predictable. They will always behave like asses, which includes being cautious and careful, often resulting in thoughtful hesitation. Pushy, demanding folks will find this behavior to be intolerable. Patient, understanding types might find this same behavior to be invaluable, especially if you want to ride with relative safety through dangerous areas like the Grand Canyon.

Duke lives in an area abundant with burros and burrows without ever a problem in distinguishing the two. He has, however, occasionally been deserted in remote camps and unable to find his own ass with both hands. littleasspen@gmail.com