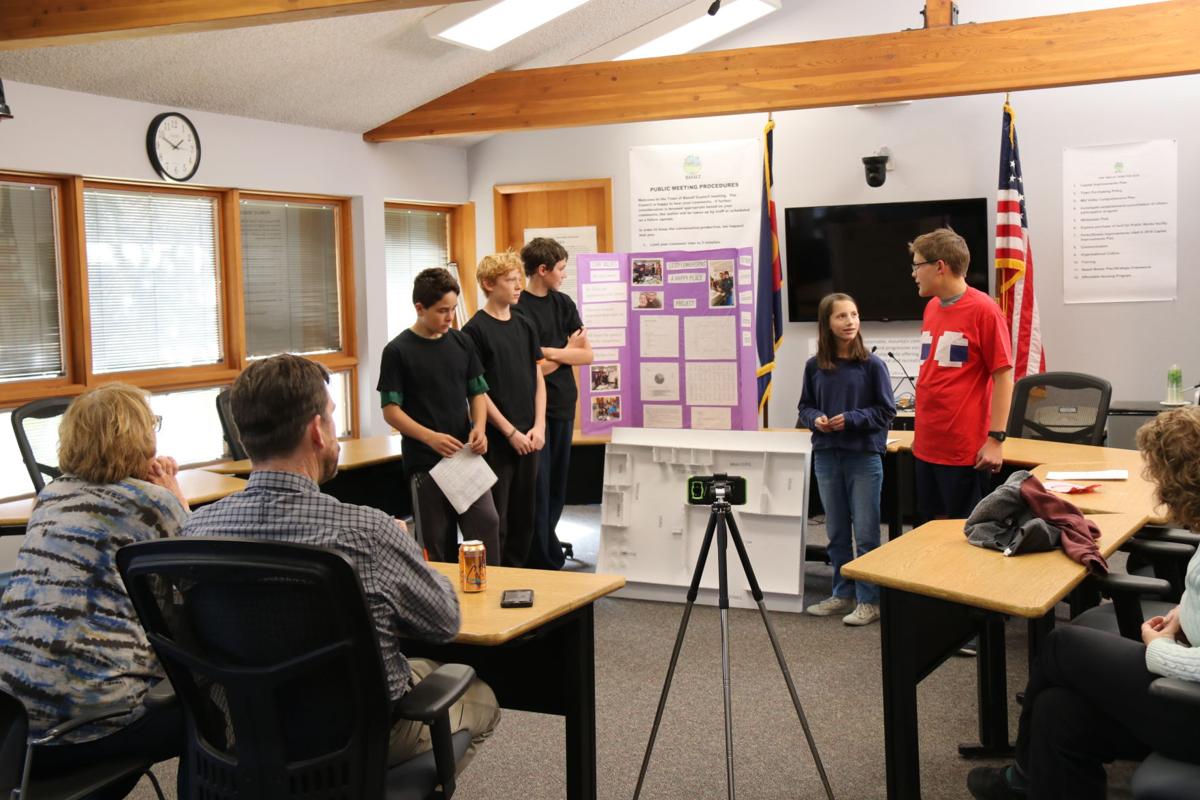 Max Lowsky, Blake Petersen, Colton Scherer, Isabel Mischke and Dylan Morrison promoted a new youth facility in Basalt as their FLL community project. Judges at last Saturday’s regional event awarded them with a “golden ticket” to states based primarily upon their strong presentation. 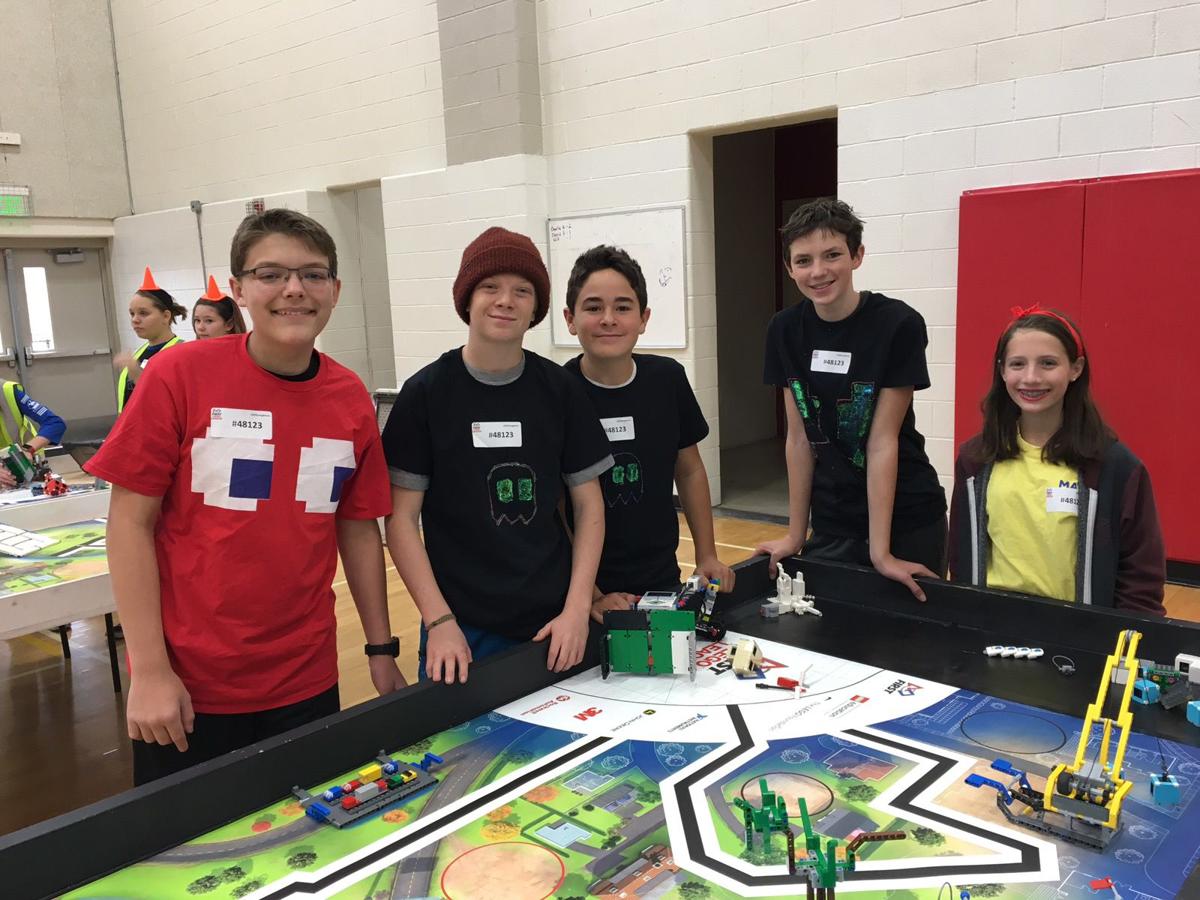 Dylan Morrison, Blake Petersen, Max Lowsky, Colton Scherer and Isabel Mischke presented at the Nov. 16 LEGO robotics regional competition in Aspen. Prior to that they gave a dry run to some Town of Basalt staff. 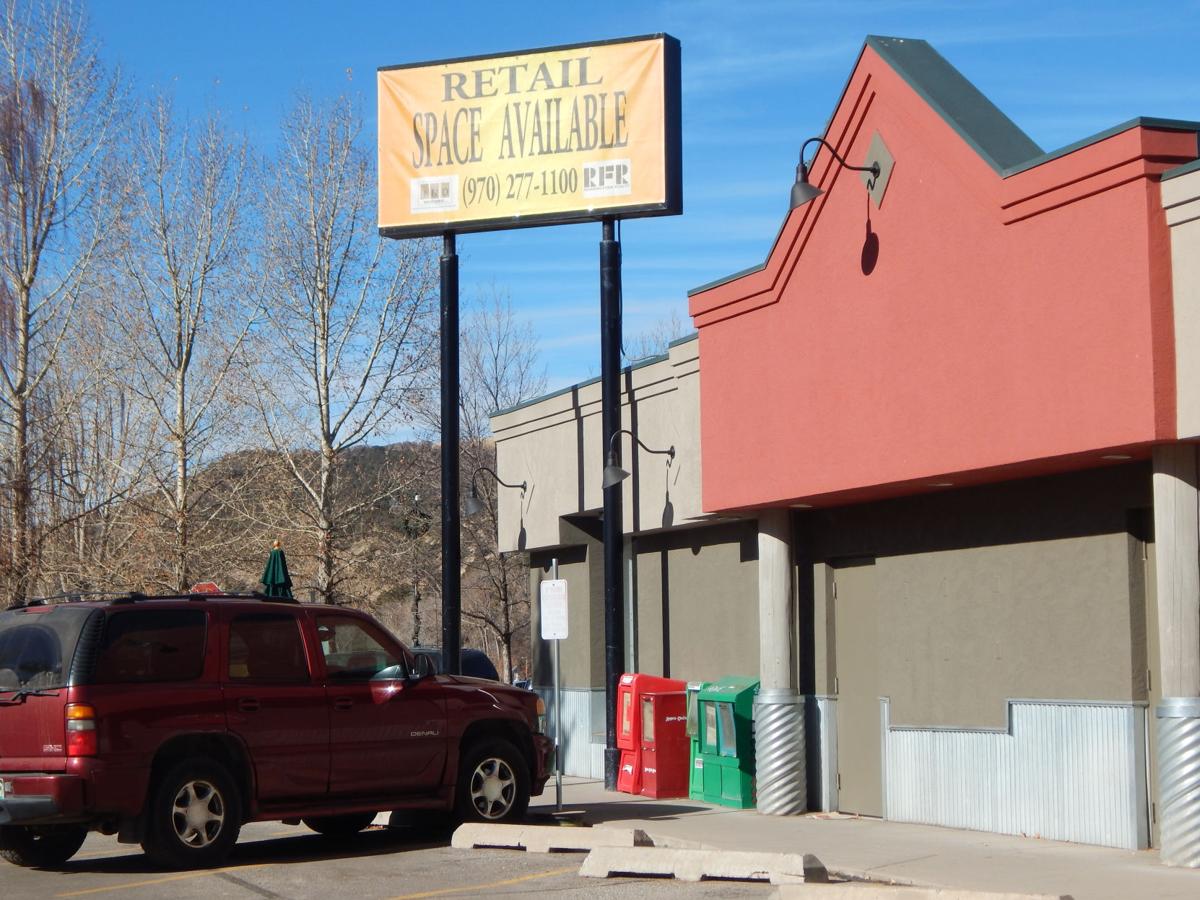 A team of Basalt Middle School students have some ideas about the best use for the empty retail space in the heart of Old Town that was most recently a Habitat Restore.

Ateam of Basalt Middle School students will head to Denver next month to compete in the 2019 FIRST LEGO League state finals after earning a coveted “golden ticket” during the regional contest in Aspen for their robotics presentation that included identifying and designing a solution to a community challenge.

“What if you could build a better world? Where would you begin?” was the question posed by the FIRST LEGO League (FLL), a global competition that challenges students to not only build functioning robots but solve real-world problems too.

One local team raised money for native grass seed to plant in the Lake Christine Fire burn area and will also be involved in the planting, according to BMS teacher Amy Kauffman, who is the FLL coach. Nearly 60 7th and 8th graders in two sections of classes are studying robotics, she said.

The other team, the LEGO Longhorns, redesigned the empty building in the heart of downtown Basalt (last used as a Restore outlet) into a youth center. In advance of the Nov. 16 regionals in Aspen, the LEGO Longhorns presented their concept to Basalt Town Manager Ryan Mahoney and Planning Director Susan Philp.

“It was very, very professional,” said Philp, of the students’ presentation which acted as a kind of dry run to last Saturday’s regional contest that attracted nearly two dozen teams. “A lot of good enthusiasm and they were great,” she added.

The students presented their concept in the form of a play, and touted the attributes that could be offered through the redevelopment of a building into a youth center, which they termed “a guaranteed safe space for your kids.”

Team LEGO Longhorns built a model to support their concept, including areas for a “Ninja” course (similar to a parcours), vending machines and an arcade.

Student Isabel Mischke said 178 responses from kids in school were tabulated to determine what amenities were most in demand: the Ninja course won out.

Team members also said converting the empty space into a youth facility would free up some rooms at the Basalt Library, which is very well-used by students, especially after school. The team availed themselves of plans for the empty building that were shared by Kauffman’s husband, an architect.

This week, Town Manager Mahoney praised the team for their concept and presentation, but allowed that converting the empty building into a youth center was not something the town was ready to take on. He has spoken to the city of Aspen about what it costs to operate the Aspen Youth Center at the ARC and recognized the costs well exceed Basalt’s budget.

“If there’s going to be a use like that, whether at that location or a different location, I think it’s going to be incumbent upon a community group to have it rise from the ground up,” Mahoney said.

The town council had previously tasked staff with investigating redevelopment of this parcel, he said.

Teamwork part of the experience

Kauffman allowed that the team heading to states on Dec. 7 in Denver is going based upon their presentation rather than the robot. The event will again be held at the University of Colorado’s downtown Denver campus.

In the BMS classes, students were paired up and assembled a robot kit which they were also asked to program.

“Of those two classes, I formed two teams from each class” and the teams chose two or three missions they wanted their robot to perform, she said.

Asked by their instructor, “What did you learn from this FLL season and Saturday’s competition,” the students opined that they learned more than originally anticipated, that they worked together successfully as a team and learned to never give up.

According to Colton Scherer, “This season, I grew upon my programming and basic understanding of EV3 Robots. It helped my skill in ‘dividing and conquering’ and narrowing down to the best missions.

“The biggest part at the competition itself was handling stress, and trying to make last minute changes. As we go to states, I hope to improve further on our skills and our robot,” Scherer stated.

According to Max Lowsky: “This FLL competition was my first. I had no idea how to program with EV3 but now I can write programs for missions with ease. I think that learning this basic code is an important stepping stone for learning code.”

Lowsky added, “I also learned that LEGO can be used for more than just a toy, I learned how to use it for elaborate attachments and sturdy structures. I learned the major importance of teammates and how important they were.”

He said, “I also learned how to work under pressure. While other teams were crumbling we were working strong. The competition changes fast. There was so much stress. We went from a strong sixth place to almost last in the robot competition. Overall, it was a great experience that I will always remember. I hope we can better ourselves for the next competition.”

This was also Blake Petersen’s first time doing FLL: “I went from barely knowing how to use the EV3 to being able to program entire missions. I also learned a lot about my teammates. The competition was crazy. We went from sixth place to almost the last place and then giving up and learning we made it to states. I learned about how to keep going and improving the programs and attachments even amidst the chaos of the competition. Overall, I learned a ton and I hope that we can improve further during and before the state competition.”

Said Dan Coriat: “I really liked the idea of Lego robotics and found that I really wanted to join Lego robotics. I went from being very scared about the competition to being very confident about it and having so much fun at the end. I loved the challenges, the coding and having to find out problems and solving them, In the end, I grew on all of my skills. Now I can write a program better than I could before.”

Student John Rawley also noted he learned much about the community project as well as how the mechanics of gears and motors operate.

“This season I learned about the importance of teamwork and not getting in arguments about everything because that is not the way to move forward. Something I would like to do next year is to start the project a lot earlier than we did this year and do a lot more next year,” Rawley said.

Since 2012, BMS has been home to an award-winning FLL team. Kauffman has been the coach for the past three years.