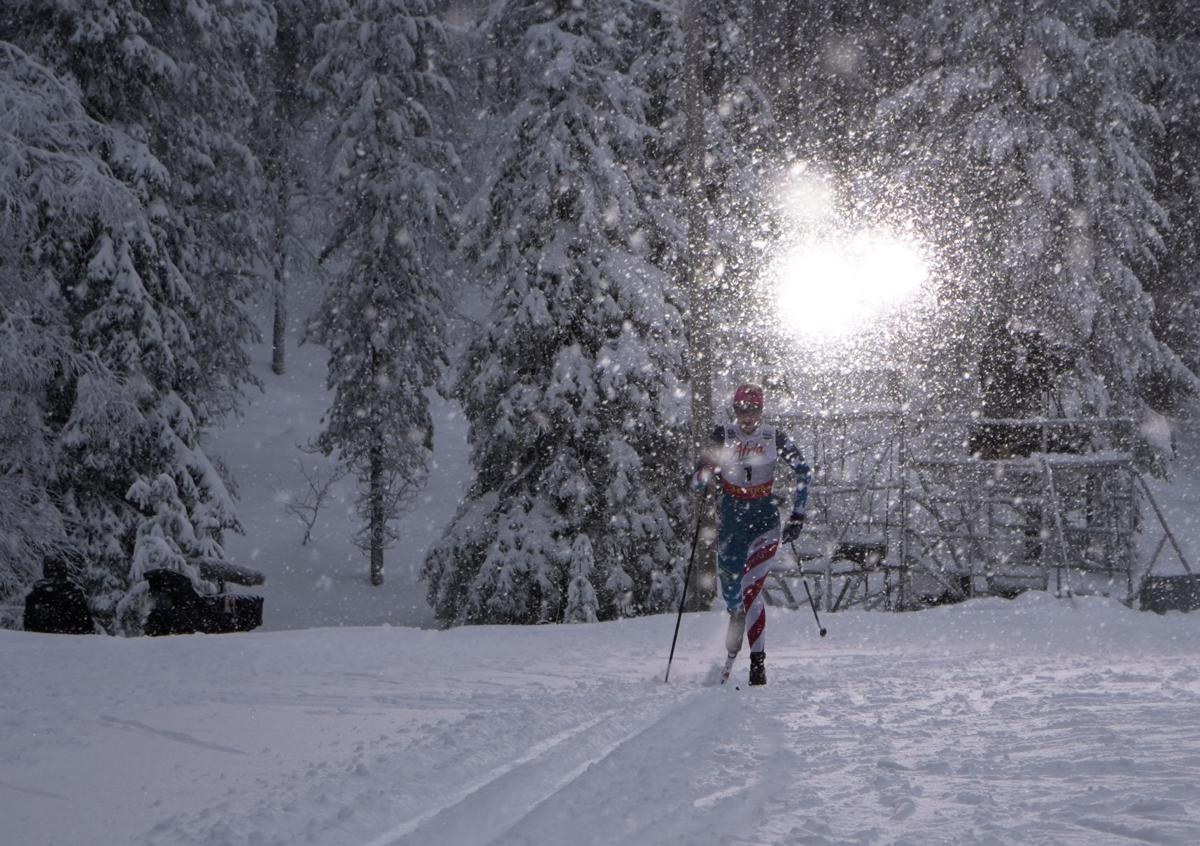 Hailey Swirbul racing in the blizzard in Ruka, Finland, where the U.S. Cross Country Team kicked off the 2019-20 season. 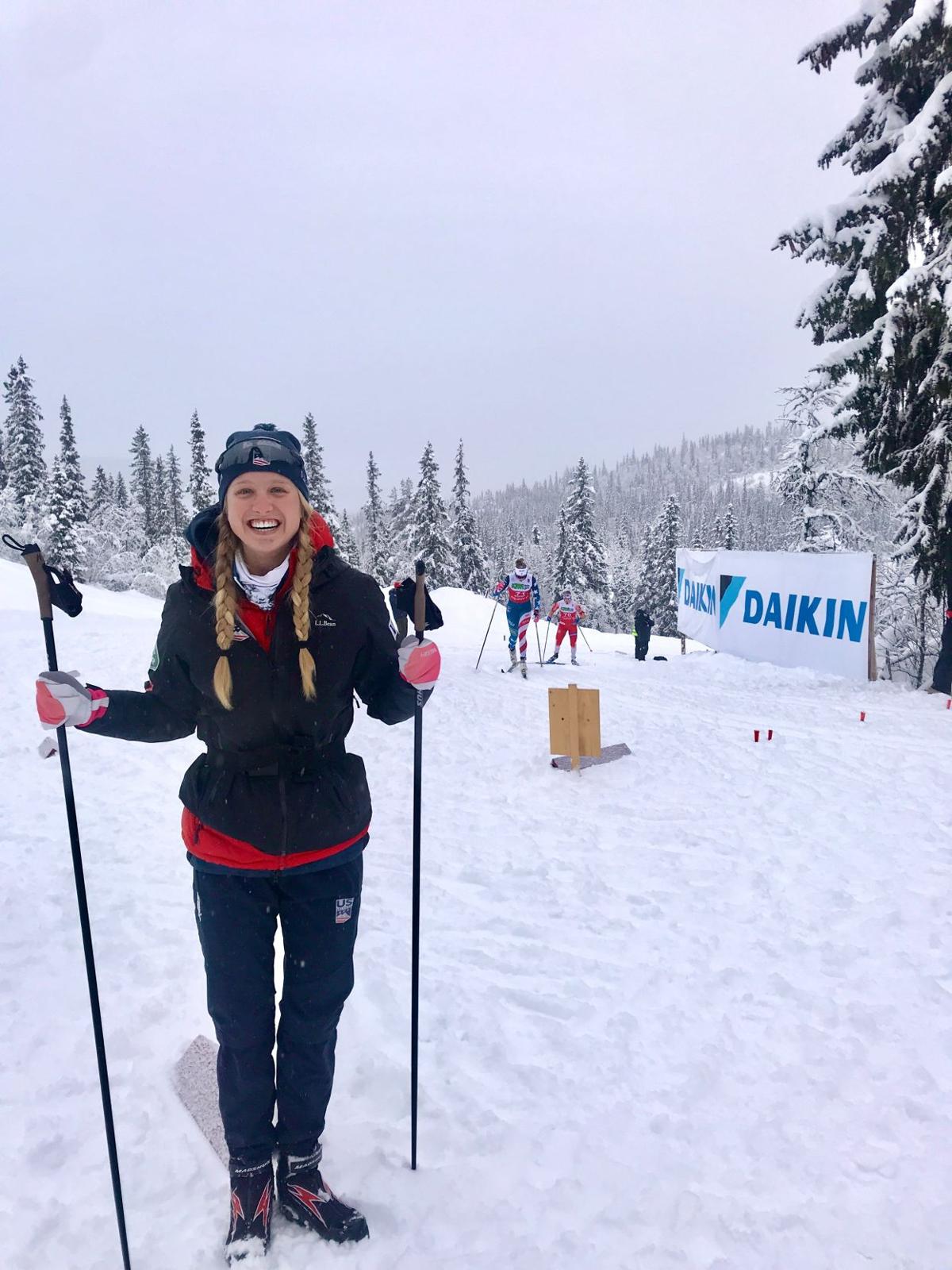 The rise of a 2016 Basalt High School graduate continues on the cross country side of the U.S. Ski Team, and shows no signs of slowing anytime soon.

Hailey Swirbul, 21, now also an Alaska Pacific University racer, who takes her college classes at Alaska-Anchorage, scored her first World Cup points this month (Dec. 14–15) in Davos, Switzerland. The El Jebel native has managed to score a few days back in the Valley for the holidays, too.

Of the 10k individual freestyle event in Davos, where teammate and Olympic gold medalist Jessie Diggins finished third to lead five American women into the top 25, Swirbul says, “That was a really exciting weekend, to score my first World Cup point on Saturday, and the next day score more World Cup points by getting 21st. It was a really special course, and reminds me a lot of home because of the mountains and the altitude and the grade of the terrain. Everything aligned for me, and it was really cool to make that next step, and prove to myself that it’s possible.”

After graduating BHS in 2016, Hailey was a member of the 2017 Junior World team that won bronze for the U.S. for the first time ever. Now, she’s in her second season on the national women’s squad, ranked 62nd in the world, and making significant progress.

When she mentions proving to herself that it’s possible, one had to ask, had there been some self-doubt before, while touring the globe?

“Yeah, I think so. I’d been over in Europe since the beginning of the season, and – got my butt kicked pretty much for the first big weekend, then got sick with a cold, so it was kind of nice to end the period on a high note in Davos. But yes, it’s tough to keep your confidence up over there, when everyone is so good at skiing, and so competitive. If you’re having a little bit of an off day, you’re way off the back. But it can happen.”

Swirbul notes that constantly practicing and then racing 10k’s can be grueling – demanding even on a world-class athlete.

“It’s definitely really tough. That’s why this year I’m home in Colorado for a couple weeks, then I’ll race in early January for a week, and then I go back to Alaska, so I’m going to get a training block in. It’s really hard to maintain your form, racing every weekend. You get so tired, you need some time to recover, then build your base back up to make it through the long season. It’s definitely exhausting to race every weekend. I think as athletes on the World Cup, we have to pick and choose which races to skip, because you really can’t do them all.”

When she returns to Alaska, Hailey is part of an APU team that’s produced some of the top Nordic competitors with whom she’s on the U.S. Team, including Kikken Randall, who won Olympic gold with teammate Diggins in 2018.

Swirbul says she feels privileged to be part of that group, as well as this current U.S. team.

“It’s been a really impressive period. In Davos, both days we had five women in the top 30, and that – that’s insane. It’s so, so special to be part of this movement. I think on the World Cup now, other teams and fans expect an American to be on the podium, or in the top five. That’s a normal thing, that’s not a surprise anymore, where even just a couple years ago, it was. So, it’s really, really special to have those women as role models and people to look up to on the ski trail, but also off the trail. They are so supportive, and so encouraging, and we just believe in each other.”

That camaraderie goes a long way with Swirbul.

“I think the most special part about scoring my first World Cup points was how excited everyone else was for me. I don’t think I’ve ever received that much congratulations and excitement! Meanwhile, we had Sophie Caldwell in the final, getting third place that day, and other girls doing really, really well, but everyone was so excited to help me make that next step. It’s really cool how everyone celebrates each other.”

Swirbul was pleased to celebrate a teammate, too, as it was pointed out that Julia Kern had made the podium at an event just hours prior to our Dec. 22 conversation: “Gosh! She’s incredible! Yes! She’s been my buddy for years, and it’s amazing to see her make that jump. Yeah, I’m very excited for her.”

She was asked about what seems to many to be a new wave of success for the U.S. Cross Country team. Swirbul had been teammates with Kern on that bronze-winning Junior World’s squad, as well. Do they feel they’re really making progress that hasn’t been there in recent years for the national team?

“I think so. I think we all realize we’re kind of the ‘up and coming’ wave, but I think the generation just ahead of us with Kikken, Sadie Bjornsen and Jessie Diggins has definitely broken down some barriers that haven’t been broken in a long time. It’s easier to see what can be done, because we have them as examples now.”

Next on the agenda for this Valley-grown “next wave” performer?

“We have the U.S. Nationals in early January, then I’ll go back to Alaska, then I hope to go back over to the World Cup in early February for a couple races. But my big focus for the rest of the season is the U-23 World Championships, in Oberwiesenthal, Germany, Feb. 29-Mar. 7. I’m trying to plan around that, and see if I qualify for more World Cups, and what opportunities arise.”

Swirbul says she makes a concerted effort not to get bogged down in the criteria and minutiae of qualifications and such, to keep her head clear.

“I just try to race the best I can. If that’s good enough, that’s good enough. But I think it’ll come down to doing well at the Nationals in Houghton, Mich., next month. That opens a lot of doors for athletes.”

How did Hailey know coming out of high school she could pursue her Nordic dream?

“I think this Valley is so full of opportunities, and has such an incredible outdoor community that got me started, and encouraged me and believed in me since day one. I’m so grateful for that. But it’s been amazing to be back and see people out on the trails, and on the streets, who are excited about following me. It’s a really special feeling to come back to our little Valley. It just feels like home, and every time I leave and come back, I realize how incredible it is, a little bit more.”

She’s glad to be home the rest of this week before heading to Michigan, and has been baking holiday cookies for her family while relaxing.

For an athlete who sounds so grounded and normal on the way up, one had to ask about one unique item in her U.S. Ski Team bio.

“I don’t know, I can keep my whole face still, and just wiggle my eyeballs. That’s my weird talent,” she says.

With that in her pocket to fall back on for a potential future horror movie career, Swirbul thanks “everyone who’s supported me, and my family and teammates and friends” for where she’s gotten in cross country racing. She says you’re welcome to follow her too, simply by searching her name on Instagram and Facebook.