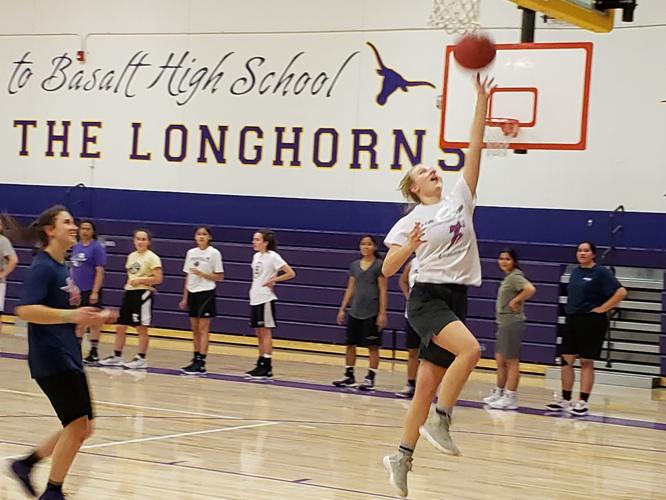 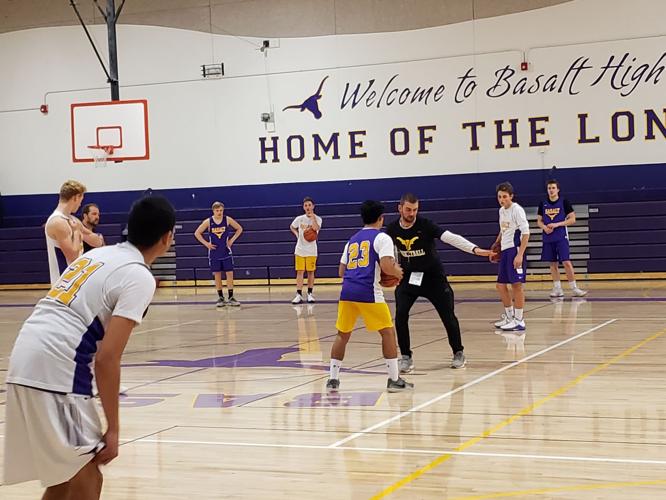 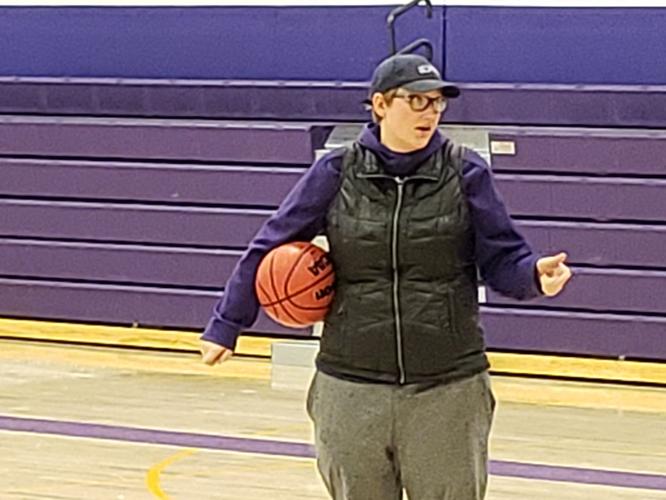 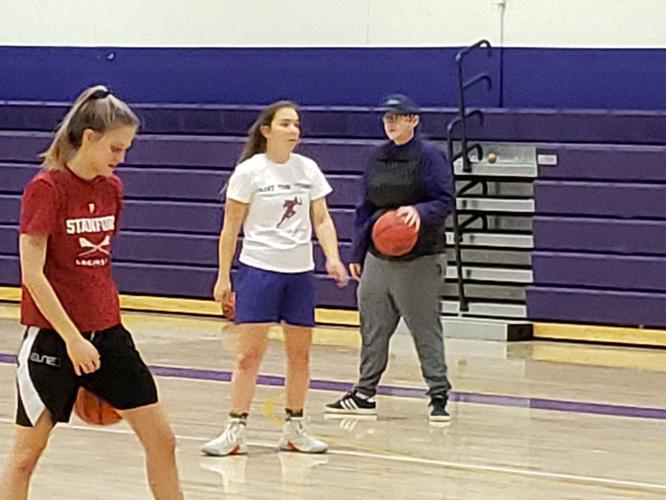 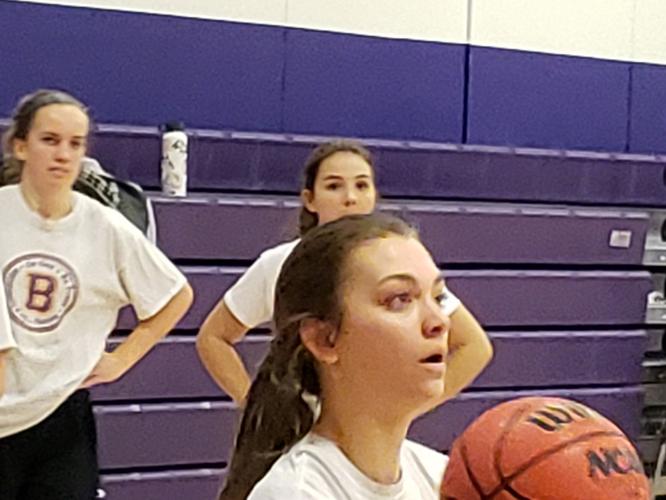 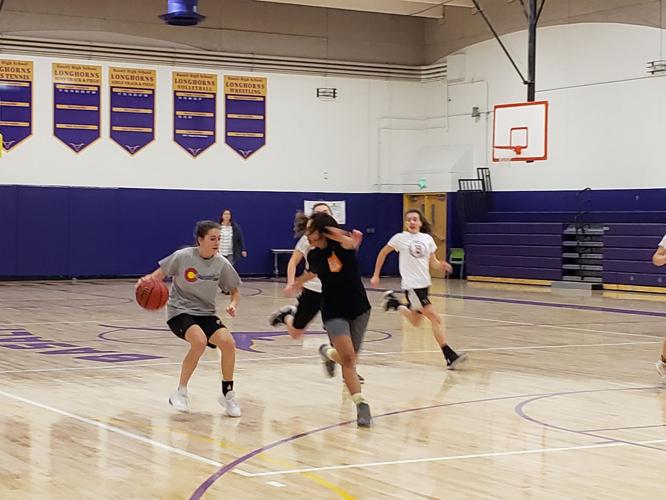 Going into the Basalt basketball season finale on Feb. 20, things are looking up in Longhorn hoops. There have been quite a few down seasons on Southside Drive in recent years, but in the second year for one coach and the first for the other, optimism seems to be on the rise.

Amy Contini has been in charge of the Longhorn girls’ program for two seasons. After back-to-back five-win campaigns, last year’s total of six wins didn’t impress many. But now, with another notch in the win column and, at one point a three-game winning streak, Basalt has seven victories with only the Aspen game left to play. That makes the 2019-20 Horns the best Basalt girls’ team in a decade, with the most BHS wins since the 2009-10 squad racked up seven, against 14 losses.

Contini says, “It’s exciting, it means we’re moving in the right direction. That’s a big goal for us. We want to continue to grow, and maybe get back to 2007 numbers of 22 wins or the 23 wins in 2008. If we can get back to playing year-round like those girls did, I think we’ll be in a good spot.”

Senior Riley Webb, on the varsity roster four years, is one of “those” young people. She was about to work on her free throws after practice when RFWJ caught up to her. How significant is being part of the school’s best lineup in a decade? “It means everything,” says Riley. “I’m really excited about how much progress we’ve made. It’s been a really fun last ride (for me), and I’m proud.”

Gaby Magana-Silva is another senior, unable to play the last couple games with a torn ACL suffered against Grand Valley during the blizzard weekend of Feb. 8. She adds, “Those little things like staying after practice trying to improve ourselves to help our team, really do matter. They’re only going to make us better.”

Senior McKinley Braun is back on the team after studying abroad for a year. “It’s really fun,” says Braun. “I love seeing these girls grow, and the growth in this team is not only from our wins on the floor, it’s also from the relationships we’ve all gotten to love.”

In practice, the Longhorns run. A lot, along with shooting and other drills too. “I’m actually a little harder on them during games than practice,” explains Contini. “But I just love ‘em, and I want them to get better. A lot of what we do is actually off-the-court character-building, trying to set them up to be good, solid young women outside of school.”

About that character building: High school sports teams are made up of that uniquely perplexing and vexing species, the American teenager. Said species of any gender, has been known to make errors on the way to building enough character to survive into adulthood.

That said, Contini’s team has seen a touch of adversity. But the coach has been able to relate so well to her team members and their parents that lessons were learned. The club survived, and seemed to pull together to thrive, gaining some of its biggest victories. “It starts with remaining true to who I am and my values, and knowing I really want the best for these girls, for them to do the right things on and off the court,” explains Contini. “99.9% of the time, they all truly are (doing the right things). They’re all putting in the hard work. We’ve gone through a few things this year, but we’re just getting closer, bonding after injuries, illnesses, family stuff, and more.”

“Our record may show the most wins in 10 years, but it doesn’t show the growth we’ve achieved,” says senior Braun. “A lot of that is because we’ve had Amy, and she’s really helped us through those challenges.”

Senior Riley Webb adds, “A huge part of growing together is helping each other through that roller coaster. When there are mistakes, we hold each other accountable, out of love and just being good teammates. That’s where we grow the most, working through stuff.”

Contini notes how the team handled a tough situation, “These girls were in those other girls’ ears all day, with ‘we love you,’ and ‘we support you.’ They were being really great teammates that week. Even as Gaby’s going through her injury now, and as McKinley and Taylor (Glen) have gone through illnesses, it’s been amazing to see these girls step up for each other. Our motto is ‘Better Together,’ and if we say it we’re going to live it. We’re not going to be talkers, we’re going to be doers. I think you see that a lot with these young women.”

These teens seem poised and self-assured for the rivalry match-up with Aspen. Contini says, “Aspen’s going to be a great atmosphere to play in. I always love going up there. Their fans are always intense, whether the team is down or up. They’re going to let you know how they feel about every call, and we like that.”

Magana-Silva will take it all in from a hospital bed, after knee surgery. “I’ll definitely be listening to this one,” she says, “I think the rivalry has always been there, and I work with one of the Aspen players. Outside of basketball and the game we’re friends, but in the game we’re rivals.”

Of her last time facing the Skiers, Braun says, “It’s really fun game-wise, because we know all their little ‘talents’ and stuff. We’re able to come out and capitalize on that.”

Then, the Horns will have only one day of rest before the first tournament game. Contini says, “We’re looking forward to (the tournament). Hopefully, we’ll get to stay on our home floor one more time before we head somewhere else. But honestly, I feel good about anyone we match up with in the league, because when we play our best, we’re going to be hard to beat. When Taylor, Gracie (Reardon), and Riley (Webb or Dolan) get it going, with McKinley and Marianna (Castillo) coming off the bench, everyone falling into place and doing their jobs, it’s really fun to see. This group of seniors has been through a couple down years, and for them to have an opportunity to go out with at least a .500 record would be really great. Kristin Whitley, our athletic trainer, says she’s never seen a girls’ sport at this school be as together and love each other as much. That means as much to me as winning any kind of game.”

The Longhorn boys are also a win better than last year’s final mark, with four victories instead of three going into the end of their season.

First-year Coach Clint Hunter, who arrived at Basalt after a dozen years teaching and coaching at Naperville North in Illinois, likes how his first season has gone. “I’m extremely happy with how we’ve progressed, every single game. Obviously you’d like to win a bit more, but that’s not the overall goal. That goal is that we get better and play better today than we did yesterday. I think we’ve achieved that.”

His club’s enjoying a two-game win streak. Those victories came in the past week — over rival Roaring Fork 54-42 on Feb. 12, and Olathe 60-35 on Feb. 14. “They had really good focus going into both games,” Hunter notes. “I told the guys in the locker room after our last win that we hadn’t been playing good basketball the last two games — we’d been playing good basketball the last five games, but just got rewarded in the win column the last two.”

Both Longhorn coaches stress togetherness, and the bonding of their respective teams. Asked about how his club has dealt with adversity, Hunter says, “In the winter season from about Dec. 20 forward, we’ve had at least one or two players out with the flu, or some kind of illness, the majority of the season.”

Hunter is pleased he’s been able to maintain a positive outlook, though, despite those setbacks. “It’s so much easier to do when you have a group that comes in with positive energy each day,” says Hunter. “During our eight-game losing streak, if we hadn’t had positive guys, we would’ve fallen apart.”

The regular-season finale will be Hunter’s second opportunity to face the Skiers of Coach Alex Schrempf. Basalt only lost to Aspen 54-48 on Jan. 28, and this seems a different team. “We’ve definitely improved, but so have they,” Hunter says, “They’ll be coming off a nice win over Delta (60-51, Feb. 15), and Coach Schrempf does a great job. We’re looking forward to sharing the court with Aspen for this one.”

In gearing up for that contest and the postseason, Hunter added, “How lucky we are to be under the leadership of Jason Santo. He’s an absolute dream to work for. It’s awesome to see how much he loves Basalt athletics in general, and how much he wants out of our kids both academically and athletically. When you work for a guy like that, coaching is easy.”

Hear the Basalt-Aspen regular-season finale, and all Longhorn post-season games, on coloradosportsnetwork.com.