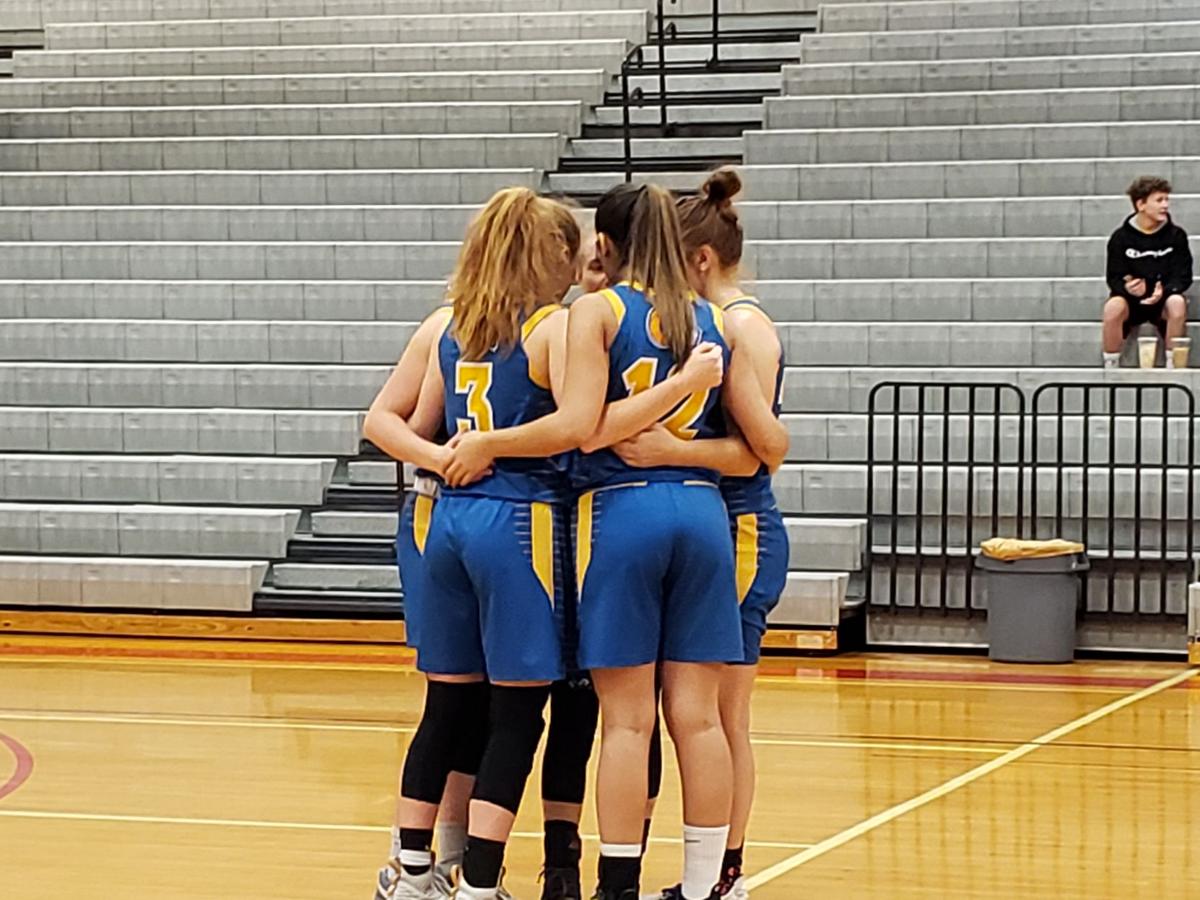 The Lady Rams huddle before tipping off in the district tournament game against Cedaredge. 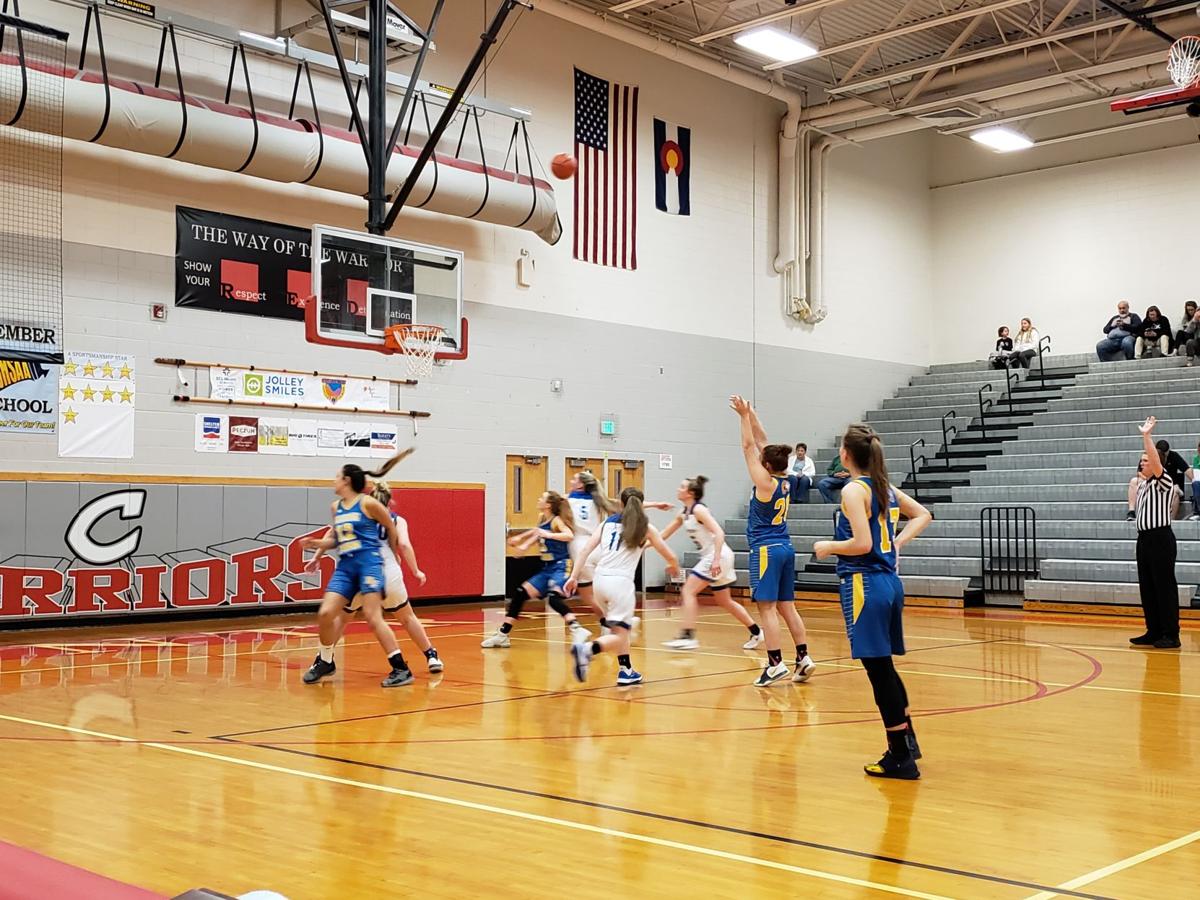 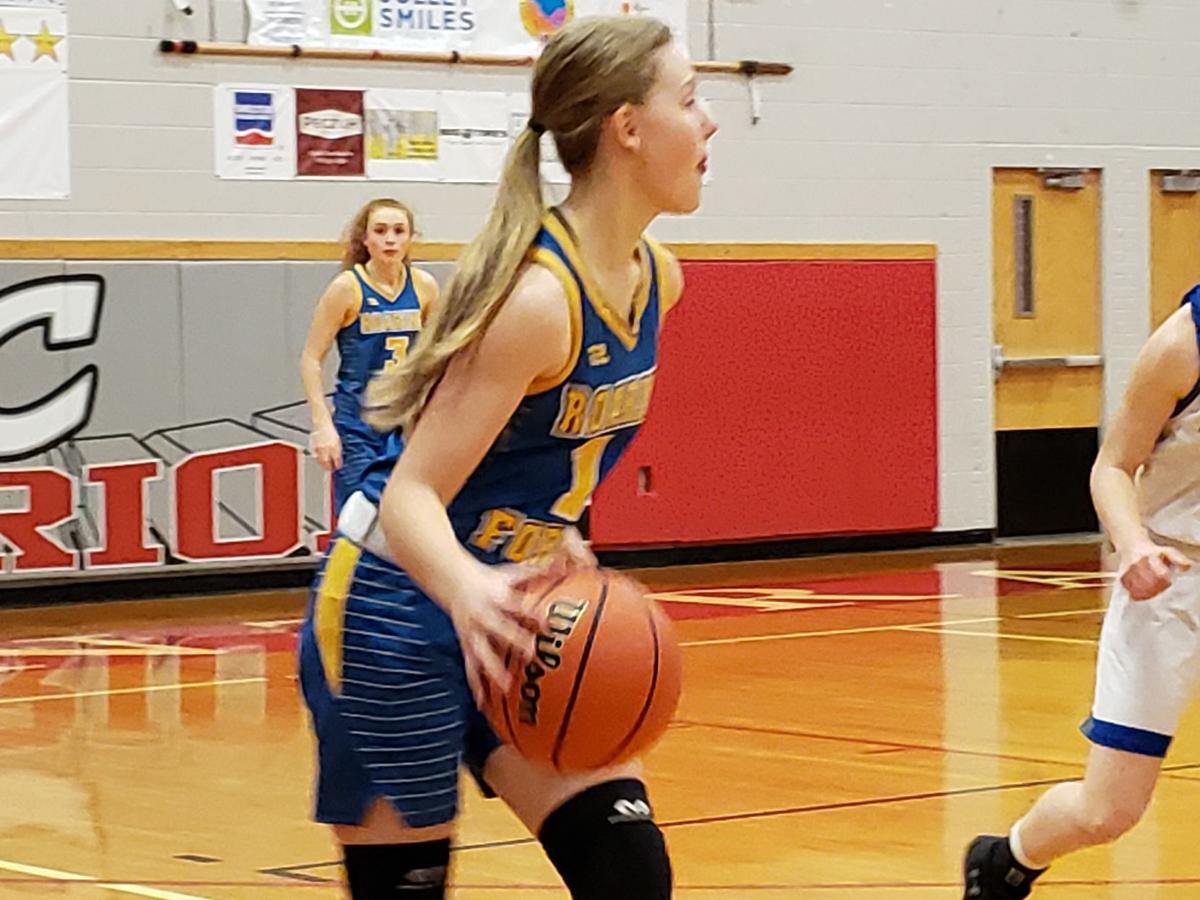 Roaring Fork’s Maya Lindgren (foreground) brings the ball up court in the game against Cedaredge. 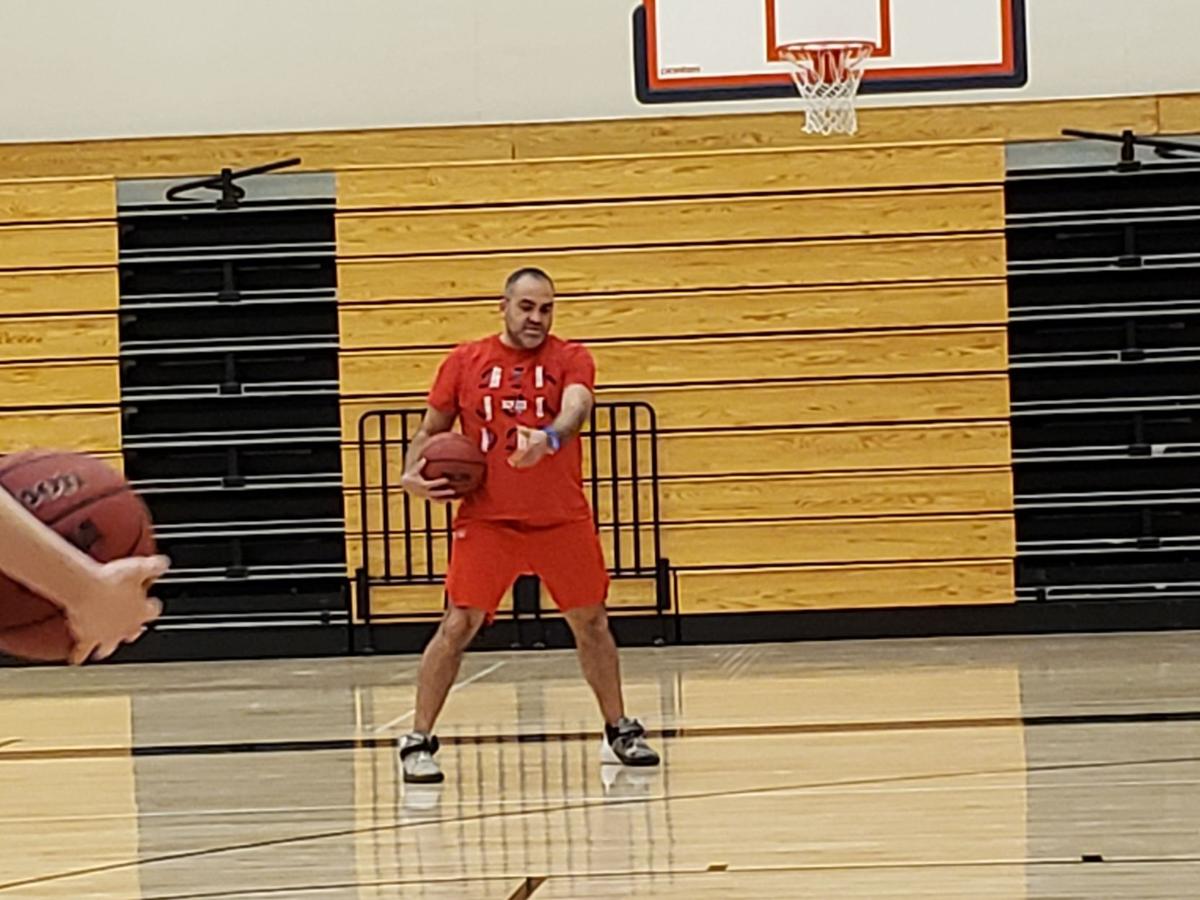 Members of the Roaring Fork Rams go through their drills during tournament practice this week. 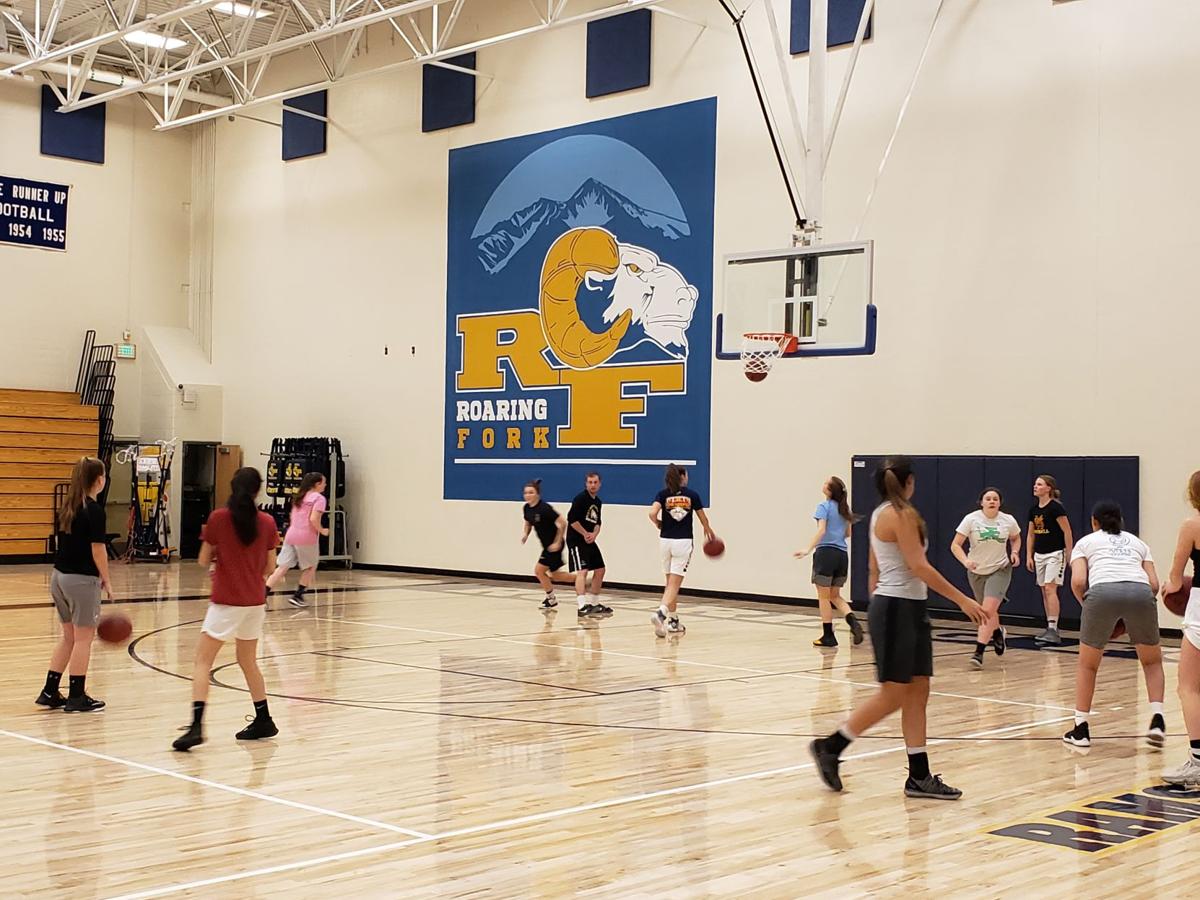 Roaring Fork girls’ basketball has done well the last few years, yet struggled at the same time. The Lady Rams have been good enough to be seeded among the top 32 teams in Colorado’s Class 3A each of the last three springs, but until this year, hadn’t made it to the Western Slope League district semi-finals at Grand Junction for some time, getting knocked out the last two seasons in the first round of the playoffs.

This season, the Rams’ record stands at 13-9, they played at district but didn’t get the results they wanted, yet they feel more prepared than ever to head into state, beginning this weekend, March 6 and 7, at Delta.

The previous two Fork girls’ squads posted identical 11-10 records. Before that, the Rams languished for several years, with single-digit win totals. The last team to rack up as many as 13 wins was back in 2012-13, and RF won 14 the year prior to that.

“I don’t know. They were ranked pretty decently the last two years and were able to get a state tournament game, playing a really high seed,” he says.

Quintero says losing 71-24 to eventual league champ Delta and 39-16 against third-place finisher Cedaredge at Grand Junction last weekend was tough for his club: “We had a rough weekend, probably the worst basketball we’d played, and I think they got a little frustrated that they didn’t play up to the level they could’ve played.”

Junior Maya Lindgren, the WSL’s leading 3-point shooter and a top-3 scorer all season, only sank one long-range shot in the two games combined at Grand Junction Central. Not much went right for the Rams, as she says, “I think we put a lot of pressure on ourselves because it is such a big weekend, and it was kind of a new thing for our program. I think it made how we played kind of – skittish, I guess, or on edge.”

Lindgren, who is also the fireballing ace pitcher for Basalt softball when not on the hardwood, took it hard at districts, visibly tearing up near the end of the loss to Cedaredge Feb. 29. What was she feeling in that moment?

“I was just frustrated that neither of the games we’d played that weekend represented the team that we are, and they didn’t show the way we really play. It was kind of embarrassing, not being able to show who we really are in high-pressure games. I think that’s something we can really change coming into the state tournament. That’s what we’re really focused on – proving ourselves, and just staying true to who we are as a basketball team.”

Senior Caroline Wisroth agrees on just how “off” the Rams were last week.

“We went in with the wrong kind of attitude, I guess. Now, going into this (state tournament), we have the team dynamic back, and we’re ready to kick some butt. We had to get our shooting back, and our guards are more confident shooting their 3’s again. I don’t think we were ready last weekend, and we were a little nervous about going to districts for our first time in a while. We all wanted to play really well, and when we didn’t it all kind of snowballed,” she says.

Rams made plenty of noise this season

The return of the team dynamic should be key for Fork this week, and if it’s back, it comes just in time. The Rams made plenty of noise early this season, belting bigger opponents. They knocked off Weld Central and Palisade by 17 points each, embarrassed Arvada High by 33, and defeated last year’s 3A runner up Colorado Springs Christian, by 14.

Quintero looks for that kind of form to return, including from outside the arc. “We need everybody, not just Maya’s shooting. At the beginning of the season we were averaging nearly 20 three-pointers a game. But then we changed it up a bit, because I also believe in playing both – we need to hit the low post too, to keep them motivated. So I told them, ‘hey, hit the post.’ But now we’re doing that too much. So we need to find that equilibrium where we do both a little bit.”

Of the 13th-seeded Platte Valley Broncos from Kersey, Quintero says, “What I know is they live off the 3-point line. They don’t really look down low, and they hope to get their 3’s in transition. They play man-to-man (defense) mostly, a little 1-3-1 zone here and there, press a little bit, but mostly they rely heavily on their guards shooting 3-pointers. They should be tough, though. Obviously they’re there for a reason and ranked there for a reason. It should be a tough game.”

Wisroth is anxious to eliminate the Broncos and get to the Panthers again. “We need a rebound, to go at them again. Delta doesn’t really know what we have yet. We need to show them what we’ve got.”

Now that it’s the 32-team field, it’s all one-and-done, with no consolation. Each game can be your last.

“Being the 20th seed, I was hoping we’d gotten some wins at the district tournament, because I felt we should be up in the top 15. But it happens, and with a new system this year, and them learning everything, I knew we were going to have ups and downs. We do a pick-and-roll continuity offense, and we’ve always done better when teams play us man, so I’m excited that Platte Valley’s playing us man-to-man. But I feel really confident that we can get a win against Platte Valley, and I think the girls do, too,” Quintero says.

Wisroth, whose older sister Kaleigh played on the 2011-12 team that notched 14 wins, says, “We’re very excited, and a lot more confident now. This is the best chance we’ve had in the state tournament in a really long time, and I think we can come through to show ’em, bringing the Roaring Fork name back to where it was.”

Lindgren, who has Quintero’s green light to launch the 3-ball, says, “I think if we just execute the stuff that we work on in practice every day, and if we just play basketball the way we know how, we can get out of there with a win.” And if the Rams face Delta for a 3rd time this season? “I think if we continue to just play, and we adjust throughout the game to what’s needed, we’ll put up a fight for that game, too. We’re not going to go down easy anymore. We’re over that.”