Current Basalt senior Jackson Rapaport belts a fly ball at Roaring Fork last year. It’s not yet clear if Longhorn baseball will take to the diamond this spring. 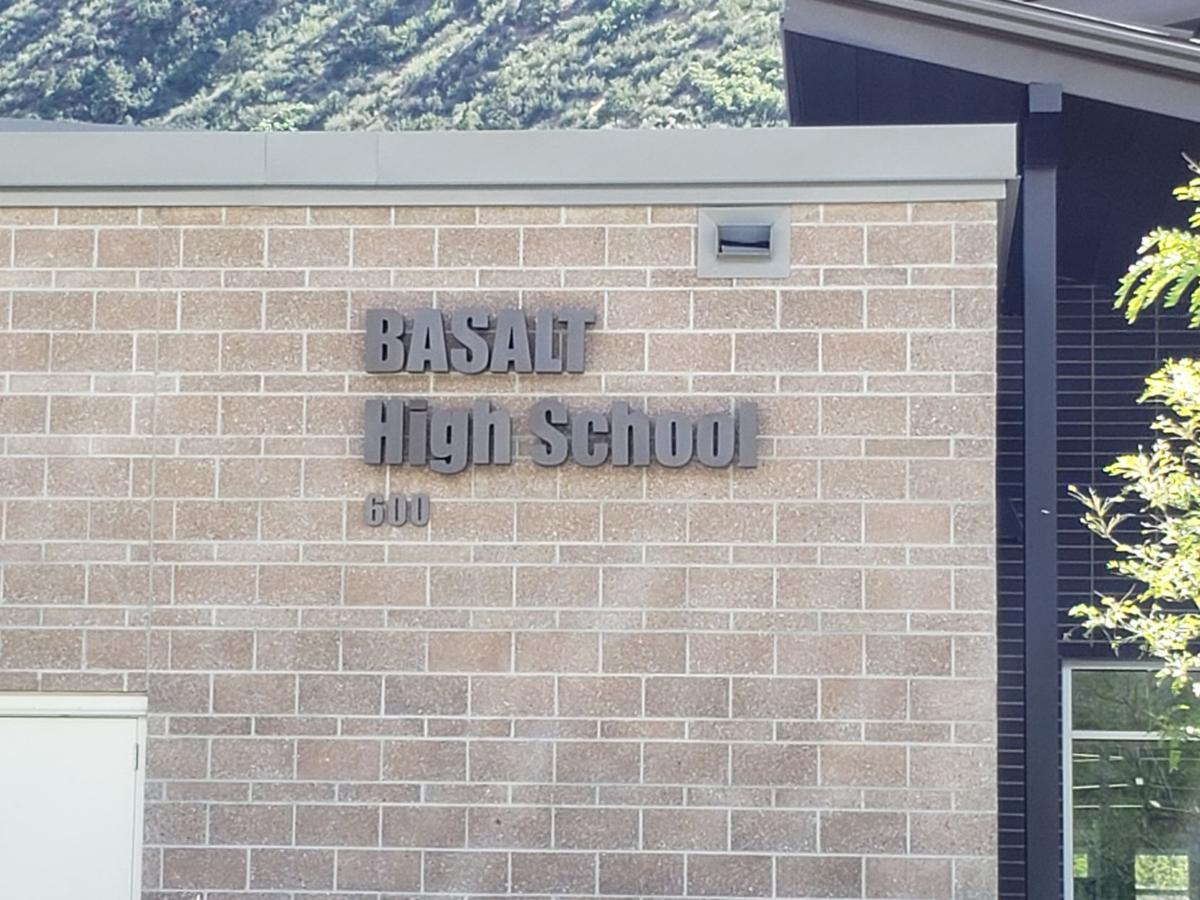 Basalt students are getting an extra long spring break. When they return March 30, they hope to get quickly into their spring sports seasons. 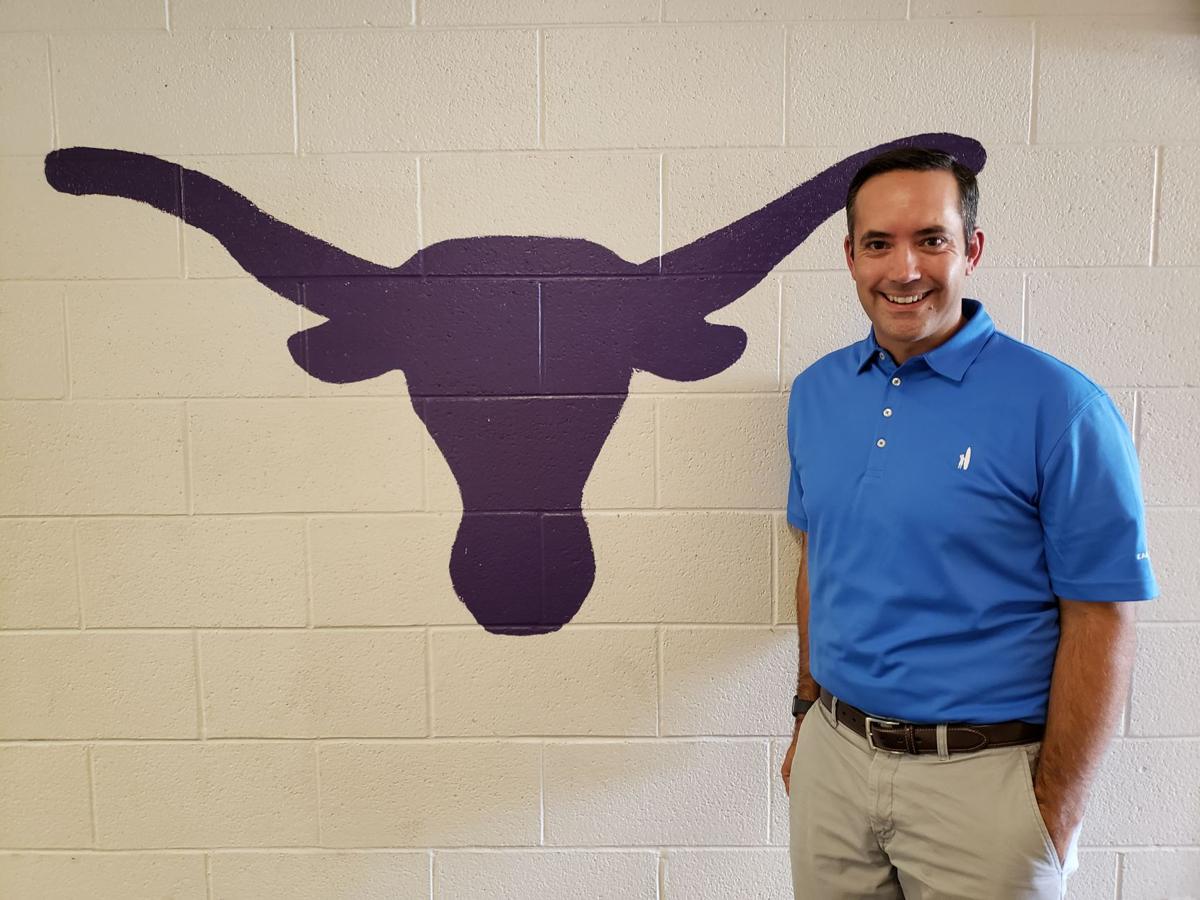 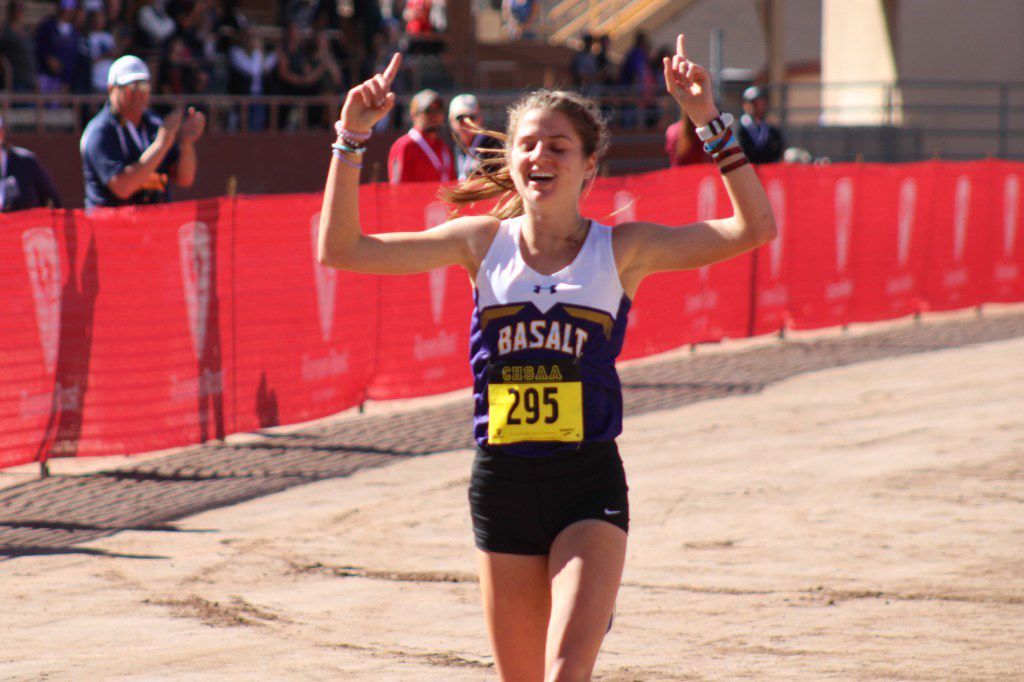 Basalt junior Sierra Bower wins the state Class 3A Cross Country title in October 2019, lowering the course record time by 20 seconds. Bower also ran faster than the champions in all other classes. If there’s a track season this spring, she’ll lead the Longhorns’ distance events.

The March 18 announcement that all public schools between Aspen and Parachute will be closed until April 17, in alignment with Gov. Jared Polis’ new restrictions narrowing the minimum standards for public gatherings, was made after the Roaring Fork Weekly Journal went to press.

As coronavirus and the fear of it grip the nation, with one of Colorado’s biggest clusters of cases here in the Roaring Fork Valley, a lot of folks remain in limbo, between seasons. Just as high schools’ winter sports were winding down and workouts for the spring were starting this month, the world changed.

When Denver Mayor Michael Hancock declared a state of emergency over COVID-19 on March 12, the University of Denver told the Colorado High School Activities Association it wouldn’t be able to keep hosting the Class 3A basketball tournaments after the semifinals that night. The games had already been down to no crowds of fans, each team getting tickets for only four family members or friends per player.

That meant CHSAA Commissioner Rhonda Blanford-Green had no choice but to stop the tournaments in 3A, 2A,and 1A, just as the Final Fours had been set in each. Earlier that same day, she’d notified member schools that all spring sports and activities would be suspended until April 6, to either address the coronavirus situation, or hope it would die down.

This week, the former Aurora Central track and field star issued an update, following Gov. Polis’ order to slow the progress of the coronavirus by minimizing crowds in the coming month. Now, the spring sports moratorium runs at least through April 18, and other events in music and speech are canceled or postponed.

The state’s spring sports include track for both genders, along with girls’ tennis, golf, lacrosse, soccer and tennis, plus boys’ lacrosse, swimming, and baseball. The moratorium means no practice or workouts, either.

In the Mid-Valley, Basalt Athletic Director Jason Santo has had a huge first year, bringing his young family from suburban Chicago to a community he’d visited years before, on Aspen ski trips with his parents.

The softball team slugged its way to an unbeaten league record, a berth in the state tournament and an overall 23-2 mark; football racked up a fourth straight winning record and playoff spot, making the state semifinals for the first time in 40 years; and cross-country found itself led by a young woman who not only won nearly every meet and the regionals by wide margins, but left the state meet field far behind, beating the prior course record by 20 seconds and running a faster time than any other girl in any class.

This winter, wrestling sent two Longhorns to the state tournament, finishing 4th and 6th in all of 3A; and girls’ basketball, without a lot of height, battled to its best record in a dozen years, under a second-year coach.

How much season could there be?

These days, Santo, like all Colorado prep ADs, is up against it, the coronavirus making calendar pages sound louder than the ticks of a grandfather clock as each day falls away. The Roaring Fork Valley district including Basalt, Roaring Fork, and Glenwood Springs extended spring break to include Monday through Wednesday of this week. Classes are currently expected to resume March 30.

He echoed an email ADs got from Blanford-Green, saying, “‘This is a changing situation, day-by-day.’ So we have no idea when that official first day back from spring break will be, although it’s expected to be the 30th. But where we stand is being analyzed at the district level every day.

“With athletics, it just means if we’re back that day, we’ll just be ‘on hold.’ We can’t practice and can’t have player-coach contact. We’ll follow the state’s rules. It’s understandable. This is a pretty scary time for everybody across the country. Especially in this Valley, with the amount of (coronavirus) cases we have documented. I think it’s a smart move, just to wait and see how this virus continues to go,” Santo said.

RFWJ asked Santo about the rosiest possible scenario, given the projected resumption of BHS classes March 30, and CHSAA clearing an Apr. 18 launch of those spring sports.

How quickly could things ramp up, and how much “season” could there be?

“I don’t think anyone has those answers right now,” says the former Geneva, Ill. athletic director. “We have to take a ‘wait and see’ approach. Everyone’s evaluating what can happen. CHSAA probably has contracts across the state for championship finals. How long do you extend those before football has to take over, before seniors have to head off to college?”

Santo opened up further about a potentially very-compressed timeframe.

“Let’s be honest – our coaches had about a week to a week-and-a-half of contact with the student-athletes before all this came down. So, if we start April 18th, they’re going to need at least another week to get those young people back in shape, to be able to play. Then, we’re looking at the second-to-last, or last, week of April before any competition. That leaves about three weeks in which to hold all your sporting events before the state finals, because we have graduation the Saturday after Memorial Day. That would be challenging, so the question is – how do you get a spring season in, in just a one-month period? I don’t think there are any clear, cut and dried answers. Right now we’re being told, ‘don’t leave your house, don’t go to a restaurant.’ We’re trying to figure out what that means day to day.”

Santo believes enough meaningful contests could be played, though: “We’d have to lower the expectations of what’s needed for post-season. I could see girls’ soccer playing for example, just their conference games. That’s doable in a one-month period. But for track, you’re really going to have to cut it down, because you’d have maybe three meets in that period before you get into state qualifiers.”

Whenever the spring season comes along, if it does, Santo points out there’ll be a lot to consider.

“I feel horrible for our athletes, no doubt. I do not feel bad for athletic directors. We can handle this, and that’s what we’re here trying to figure out. I do feel bad for those who line up our officials, the ‘assigners,’ because it could become difficult to get a limited number of officials out on fields, when everyone’s playing every day. That might become the next challenge – just handling the influx of contests jammed into a 20-day period when everybody’s got to play 10 games.”

Santo says that very compressed schedule would lead to essentially constant action throughout May, and he predicts if it comes down that way, those assigners are “going to be under the gun.”

There may yet be a spring prep season this year, but again, there may not. Jason Santo remains optimistic. “I want athletes on the field, not just because I’m an athletic director, but because it’s beneficial for them. Communicating with my coaches, there’s sadness that the season’s been delayed this long, but they understand. This is just unfortunately where we’re going to be as a community and as a country until everything is cleared,” he said.

So as extra-long spring breaks wrap up later this month, the hope will be that the coronavirus curve flattens, schools reopen and high school sports bounce back, signaling a return to cultural normalcy.

Santo is ready for however things turn out. “I said to my coaches in a group text this week, the moratorium continues until the 18th and there’s nothing we can do. We can’t fight it. We’ll just wait.”