You are the owner of this article.
Edit Article Add New Article
You have permission to edit this article.
Edit
Home
News
Schools
Sports & Recreation
Business
Arts & Culture
Opinion
Photos
Aspen Daily News
Share This
1 of 6 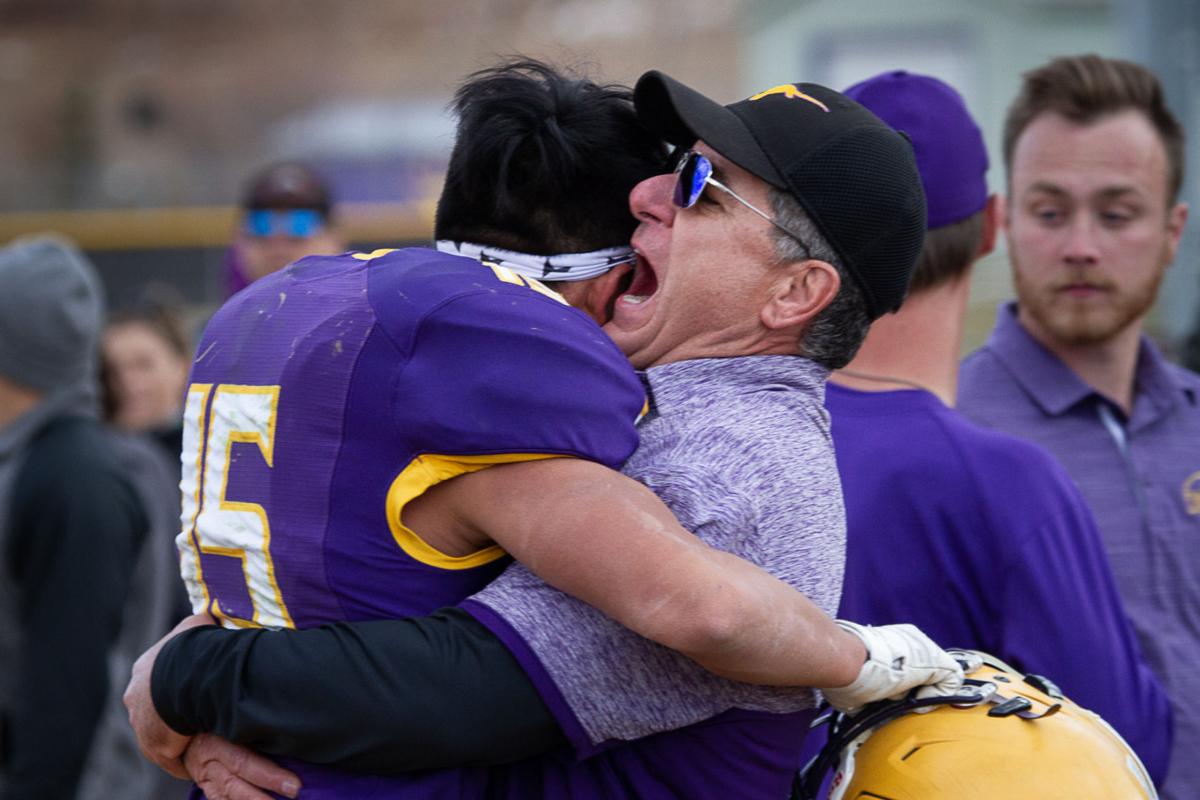 The Longhorns' Rulbe Alvarado (15) gets a celebratory hug after his huge role in the team’s quarterfinal win. 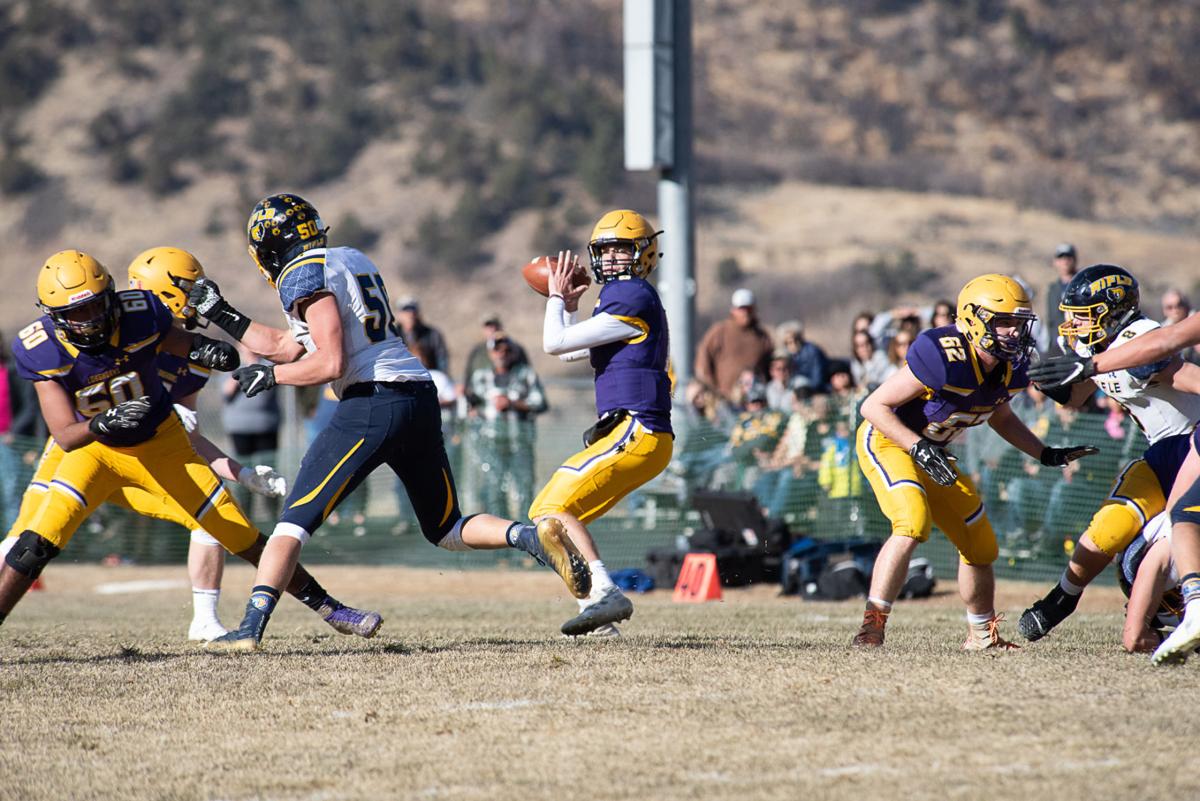 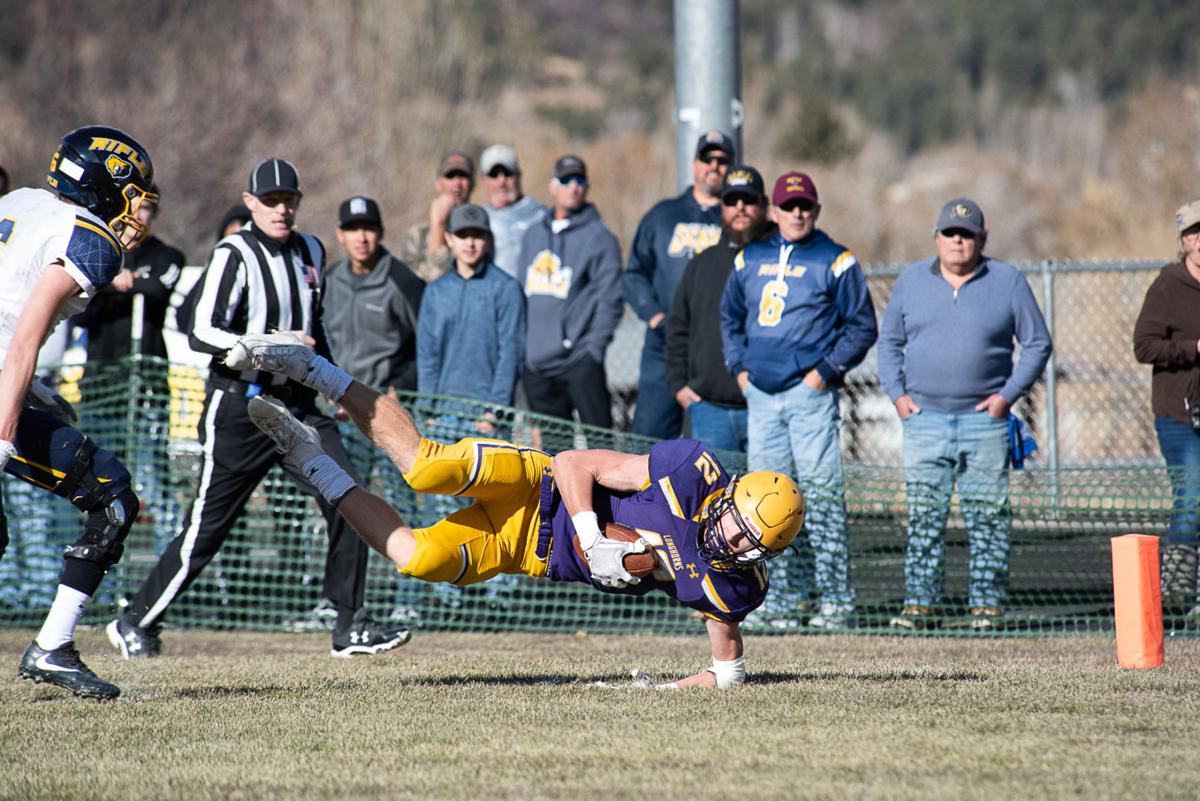 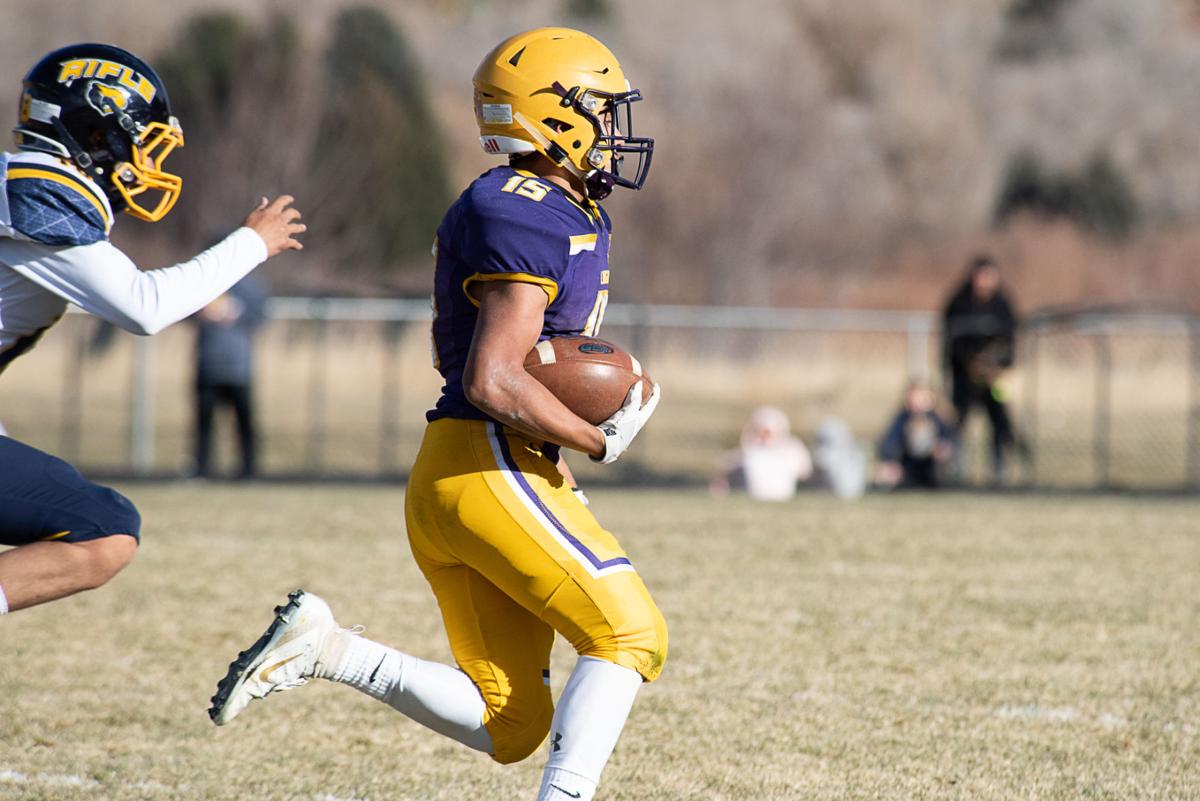 Basalt's Rulbe Alvarado (15) scored 15 of the Longhorns' 21 points against Rifle, 6 of them coming on a 90-yard kickoff return. 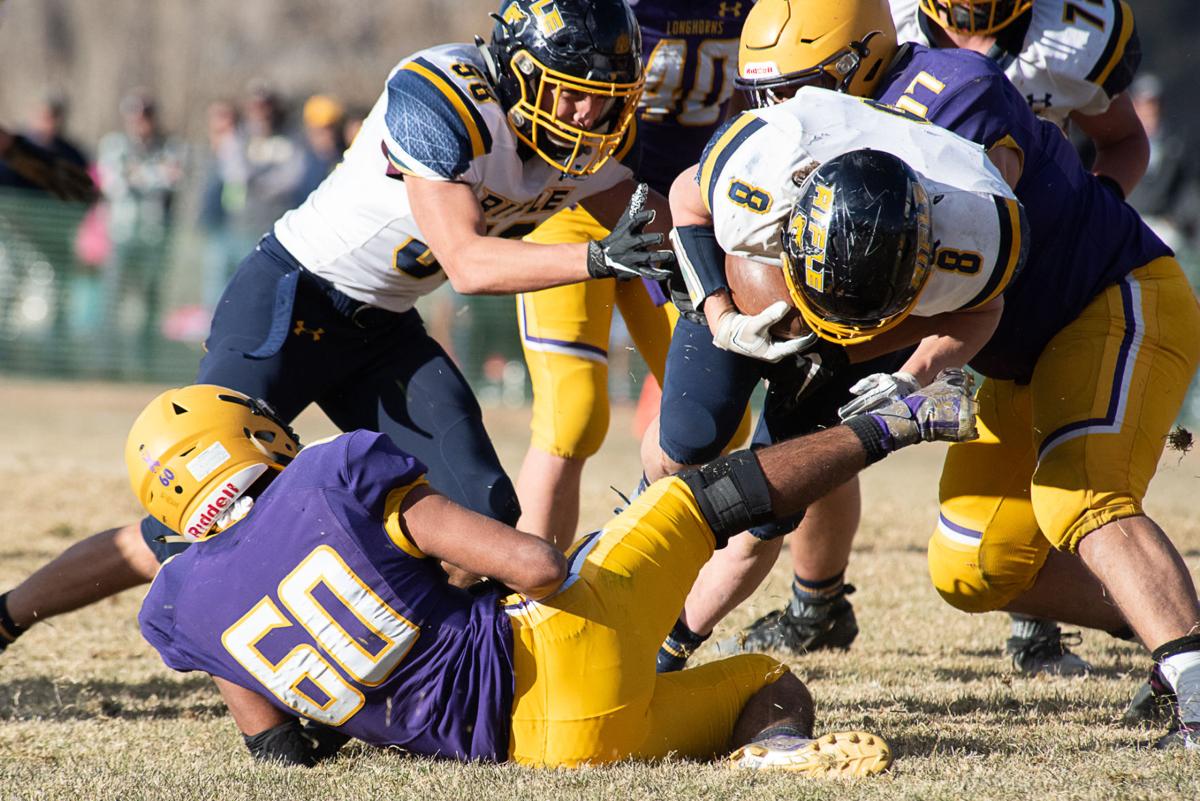 The Longhorns kept Rifle's Levi Warfel (8) at bay during last week’s game. He was contained by defenders including Ernesto Lopez (77) and Jose Castorena (60). 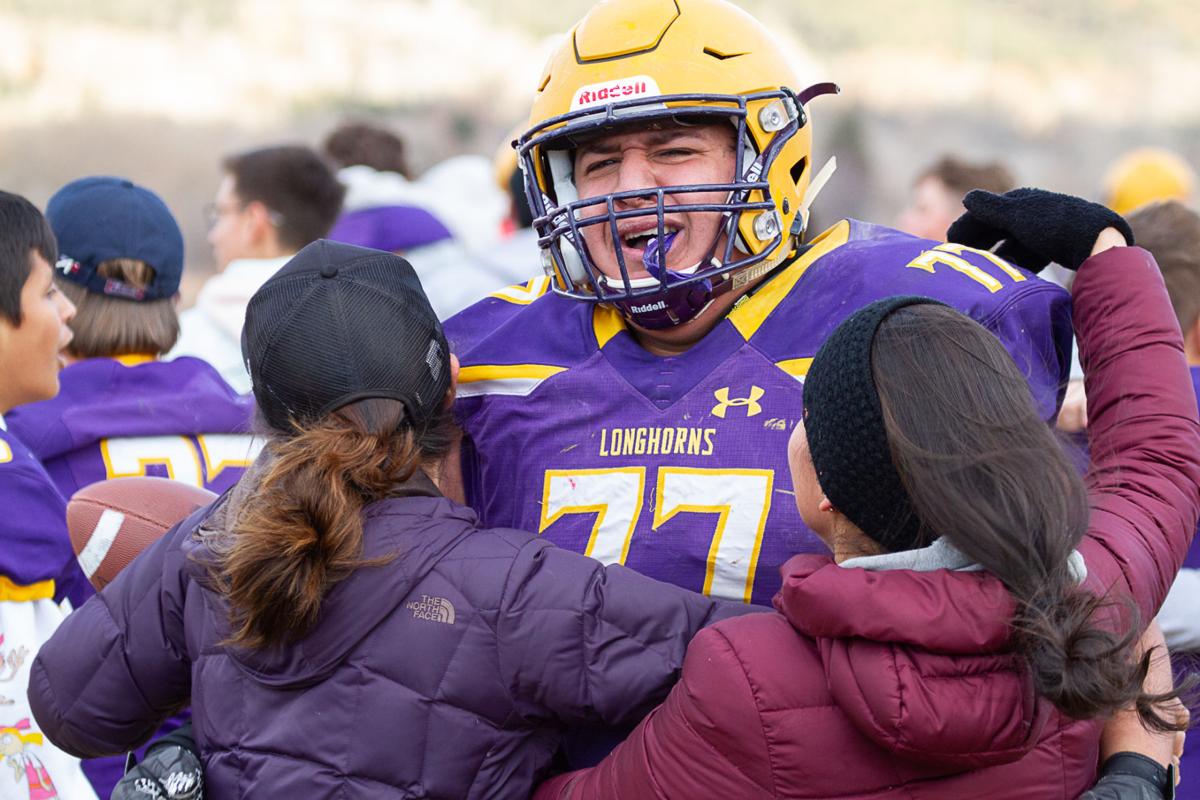 The Longhorns' Rulbe Alvarado (15) gets a celebratory hug after his huge role in the team’s quarterfinal win.

Basalt's Rulbe Alvarado (15) scored 15 of the Longhorns' 21 points against Rifle, 6 of them coming on a 90-yard kickoff return.

The Longhorns kept Rifle's Levi Warfel (8) at bay during last week’s game. He was contained by defenders including Ernesto Lopez (77) and Jose Castorena (60).

Basalt football still has plenty to play for this 2019 season, with 9 wins and 2 losses and having avenged one of those defeats last weekend. The 9th-seeded Longhorns play next in the Class 2A semifinals, hosting the #4 Panthers of Delta, thanks to a 21-14 double overtime upset victory over top-ranked Rifle. The Panthers knocked off fifth seed Faith Christian with a late field goal, 37-35.

The other 2A game this weekend will pit #2 Sterling against #3 Resurrection Christian. The two winners meet for the title at CSU-Pueblo, Nov. 30.

This Delta game, which begins at 1 p.m. on Nov. 23, is Basalt’s first appearance in a football Final Four in 40 years. In 1979, when Highway 82 was only two lanes, there was no Movieland or Willits Town Center, and certainly no interstate through Glenwood Canyon, Basalt was a much smaller 1A school. Those Longhorns, like the current 2A team, made their class’ quarterfinals three years in a row.

And in 1979, the Haxtun Bulldogs made their way here for the game from way out on the eastern plains. It was played on what’s now the middle school field, and as the Haxtun Herald reported on Nov. 15 that year, the Longhorns prevailed 28-15 on a chilly day.

The Basalt Heritage Society’s Janice Duroux, Class of ’68, whose son Dan was on that 1979 club, tells the Journal that Basalt headed for the plains to take on the Limon Badgers in the semis the following week. The Badgers, who this year celebrate 100 years of football, hold the most state titles in Colorado, 17, the most recent achieved just last year. In 1979, they eliminated the Longhorns and went on to win the 1A championship over Lyons by a score of 47-21.

These 21st-century Longhorns are on a roll, and have already conquered the first stop on their “Redemption Tour,” avenging a 21-9 loss to Rifle with that overtime thriller. Now, they target the Panthers Nov. 23, the only other squad they’ve lost to this season, 35-6 on Oct. 18.

That game got off to a horrendous start for Basalt, as Panther quarterback Nolan Bynum rifled a 40-yard touchdown pass to Hunter Hughes on the game’s opening play to put the Longhorns down 7-0. Then on their own first play, Basalt fumbled, Delta returned the ball to the 1-yard line, and scored a second later. Just like that, the ’Horns were down 14-0 in less than a minute, and simply couldn’t recover.

This time, however, things are expected to be different. There’ll be a huge, raucous Basalt crowd in the stands and on the track. Meteorologists say it’ll be partly sunny and about 43 degrees at the 1 p.m. kickoff. And Basalt will be well-prepared and confident, having ended the season of statewide #1, Rifle. Last time out, the Panthers had something to prove, getting shelled by the Bears 47-29 the previous week. Now, they’re up against the one team, Basalt, that’s held Rifle to both of its lowest point totals of the season, 21 in that regular-season loss, and 14 last weekend.

That’s not to say either team will have it easy in this one. Delta is still Delta. In the victory over Faith, Nolan Bynum accounted for nearly all of his team’s points, passing for four touchdowns and running for another. He threw for a season-high 358 yards, four weeks after passing for 207 and four TD’s against Basalt.

Expect to see him winging the ball to receivers including Hughes, Nathan Workman and Gauge Lockhart. The versatile Ku La Moo is a major weapon for the Panthers as well, as a running back, receiver and placekicker. He put the 40-yard field goal through to ice the Faith Christian win.

The Longhorns have plenty going for themselves, though.The man for Basalt in the quarterfinal win over Rifle was clearly junior Rulbe Alvarado, who emerged every bit the multi-dimensional threat Moo is. Alvarado scored 15 of the 21 Longhorn points against Rifle. He ran back a kickoff 90 yards for a TD on the play that changed the entire game’s momentum, he caught Matty Gillis’ pass for a 2-point conversion after that score to tie it at 14, and in the second overtime after catching Jackson Rapaport’s option throw for the winning touchdown, Alvarado kicked the final extra point.

Alvarado told the Journal he was glad to have had the help of his teammates, but hoped he’d been able to assist them too. He says of this week, “We can’t be content. We’ve got to keep working at it, practicing hard, watching film, then be ready and fully prepared to take on Delta.”

Basalt appeared to be a different club from the one that led Rifle 6-0 and 9-7 most of the way through the Oct. 25 loss. Their defense didn’t wear out in the fourth quarter and allow 2A’s season-leading rusher Levi Warfel to rack up excessive yardage. In fact, the only time he broke free for one of his customary big plays came a little over two minutes into the third quarter.

Warfel appeared to be stopped, as he had been by the Longhorns all day, but managed to bounce off the pile and race for the end zone, a routine-for-him 62-yard touchdown run. That score made it 14-6 Bears and some ’Horns fans were already down, thinking “not again.” Seconds later on the Bears’ kickoff is when Alvarado brought Basalt all the way back, on the scoreboard and psychologically.

Rapaport gathered in Gillis’ 20-yard touchdown pass for Basalt’s first score. Then late in the 4th quarter, Rapaport leaped high in front of Rifle quarterback Holden Stutsman as he attempted a pass, the ball deflecting harmlessly off the 6’3” senior’s chest.

BHS Coach Carl Frerichs says, “Our guys battled every play, playing their hearts out. You could see that emotion all four quarters, and I think that’s why we were in that game in overtime.”

Basalt has placed four players including Rapaport, Alvarado and tight end Tristan Johnston on the all-Western Slope League team for the season. The fourth member of that group is four-year starter Ernesto Lopez, a 6’1”, 250-pound lineman who’s also been named to the All-State team. Lopez and his linemates were opening holes for running backs Gavin Webb, Peter Zimmer, Cole Dombrowski and Alvarado, while on defense closing holes down on Rifle’s Warfel, Talon Cordova and Kenny Tlaxcala.

It could be another epic day for Basalt football hosting Delta. According to Frerichs, “We seem to bring an added level of intensity at home. I know the kids are going to be excited to get a good shot at them.”

Following that October setback, Basalt says it’s ready to right the ship, as it did against Rifle. Kickoff is at 1 p.m. on Saturday, and the Always Mountain Time broadcast begins at 12:30 p.m. on coloradosportsnetwork.com.

While American football continues in the playoffs, Colorado’s boys’ soccer season has wrapped up, with congratulations due to Carbondale’s Roaring Fork Rams. They’ve just completed a 15, 3, & 1 season, proudly representing this community as runners-up in all of 3A soccer.

The Rams were as tough as anyone had been all season against defending state champion Kent Denver through the first 50 minutes last weekend, the Sun Devils not breaking through until 10 minutes were gone in the second half.

After that first score though, the Devils ran to a 5-0 championship win, their fifth in six years. Facing a barrage from Kent, Rams keeper Noah Wheeless finished with 10 saves. Congrats to the Rams for getting there, and bringing back that really large second-place trophy.